Usually I have managed to make my Gygaxian Democracy images vaguely themed around a character, but late in April I realized I hadn’t done one for the month yet and with no signs of my madcap schedule slowing down at all, I figured I ought to doodle whatever was on my mind and hope for the best. Then, when assembling this post, I remembered I actually had another small batch of doodles, too! So herein are both drawings with their respective keys, crowdsourced from the terrific creators over on Twitter!

Exhibit A: A WizardThiefFighter Special Edition

1 – @trebuchetops – Mawful Blade – Oozing thick saliva, strips of half digested flesh dangle from its handle. While held, you have an overwhelming desire to chew on the blade, even if it breaks your teeth & slices your tongue, consuming it all. You can eat anything you cut/pierce with the blade.
1 – @stratometaship – Painter’s Dagger – The blade turns into a brush, perfect for painting statues, idols, vehicles and large surfaces. Comes in several colors: 1 – black, 2 – midnight, 3 – inky, 4 – soot, 5 – charcoal, and 6 – black metallic.
1 – @greerrrr – Barthomelew’s Flapjackalator – The 3rd Final iteration of the long vaunted breakfast prince’s morning arsenal, this enchanted dagger has two magical edges. One side deposits slippery butter when scraped across a surface, the other sticky maple syrup.
1- @john_errwin – Ever-Jam Dagger – Enchanted by a sandwich-making wizard, the dagger excretes a flavored jam when pressed with bread, for questing adventurers who yearn the taste of home. Flavor is determined upon creation: 1-strawberry, 2-blackberry, 3-blueberry, 4-grapes, 5-cherry, 6-space
1 – @d20_rs – Knife of Disillusion – Stabbed victim suffers a major morale trauma, as they start to question their self worth while bleeding out.
2 – @stratometaship – Rod of the Lesser Moon – A shrunken moon coated in a thin atmosphere of voidstuff floats at the end of this rod. If the rod is destroyed, the moon reverts to its natural size: 1: 50 km across, 2: 500 km, 3: 5,000 km. Don’t break the rod in orbit or the surface of your world!
2 – @wereoctopus – Scrubbing Staff – Have you nearly lost a limb cleaning moulds in a dungeon? This lets you clean from a safe distance! Control the spinning pumice ball with a mere thought. Pump action dispenses soapy water or other fluids from its tip. Only 5 easy payments of 99 gold pieces!
2 – @_cloudberry – Wand of Object Entrapment – Point it at any object, and it gets shrunk down to the size of a fist and suspended over the end of the wand. Point it again to unleash the object, firing it at high velocity as it grows back to size. Currently holds the moon of an alien planet.
2 – @LudovicCrepel – Viking Moon Mace – Damage depends on the phase of the moon. Can also control the tides for easy navigation.
2 – @plus1longsword – Rod of the Cobalt Hills – Whichever of the various barbarian tribes controls the rod, is granted access to the best hunting and fishing spots, as well as a blessing from Guthrefold, the stone giant shaman. A ritualistic battle held every year grants the right to the rod.
2 – @iammattsanders – The Shrouded Mace – To gaze upon its unveiled form is to see your death. For some reason it usually involves getting your skull crushed.
3 – @jvwest – Keys to Despair – The Key to Darkness, The Key to Oblivion, the Key to Desolation, and the Key to Endless Gray. Touching them the first time, save vs. death or fall into despair and be unable to act again. Ever.
3- @stratometaship – Keys to the Hearts of Mortals – A set of keys that, when poked gently into a victim’s back, reveals their innermost fears and childhood traumas. Can be useful for therapy or torture. Use with caution.
3 – @greerrrr – Keyring of Translocation – While whirling this ring on the end of it’s cord, a fourth dimensional hallway with purple wallpaper and a thick rug will pierce reality from any door you open to a door unlocked by an attached key. You may do so while the keystone is in your stomach. The passageway is no shorter than reality, merely direct and well lit. Do NOT open any of the other doors. Do NOT stop whirling the keys while traveling. To retrieve the stone after use, simply wait 1-4 days. Please wash your hands.

Exhibit B: Whatever I Thought Up Late In April 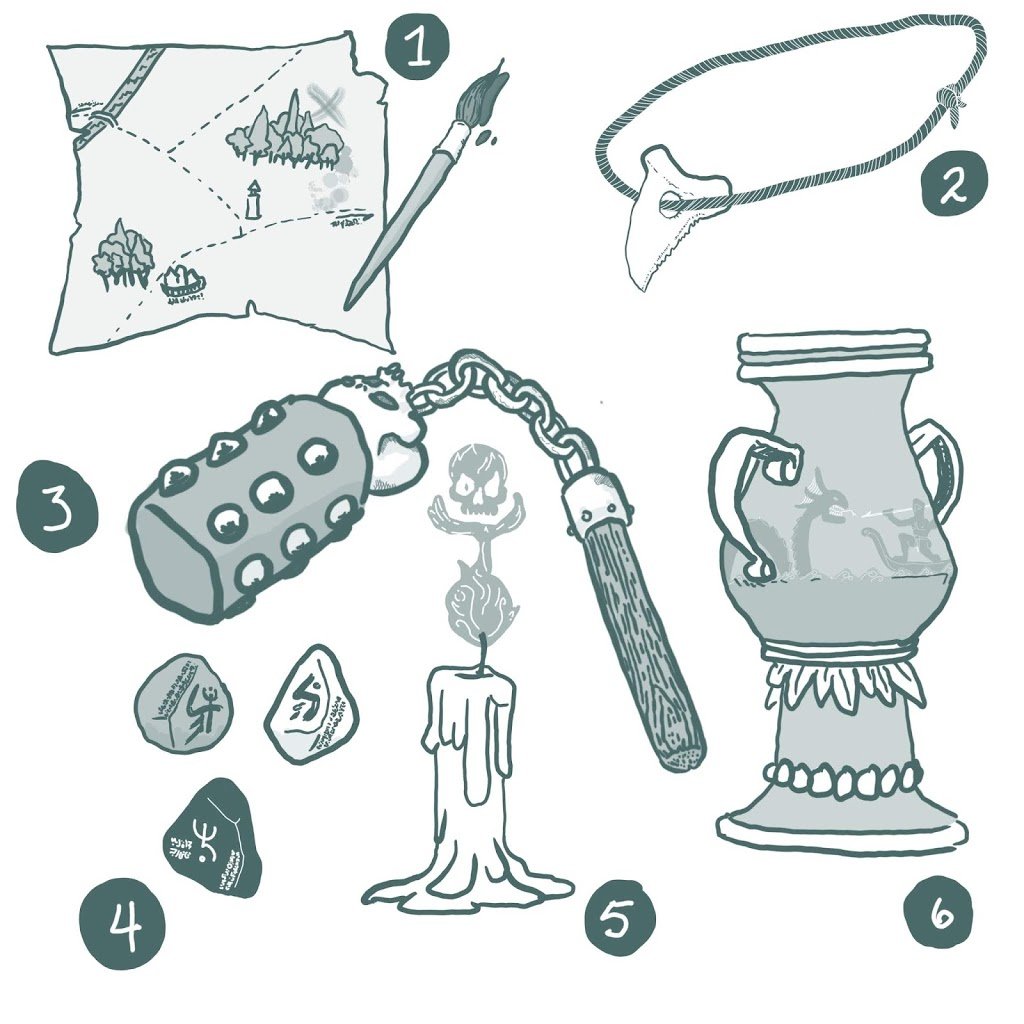 1 – @wereoctopus – A leather scrap flayed from the World Turtle. Depicts a 6-mile hex. Terrain features drawn on the map will appear in that hex over 10 minutes — usually too slow to harm aware, mobile creatures. Scraping back parchment to remove features has a 1-in-6 chance of ruining it.
1 – @restrepowriter – The Forgetful Brush – A minor item with a major curse. This brush never needs ink since it magically provides its own, and it lends the user enough talent to draw simple things, like maps. But anything the user draws, the user forgets.
2 – @john_errwin – Bonetooth Necklace of the Hunter – A trophy of the sly and strong, this necklace can store up to 20 different tooth or bone of a hunter’s prey. Once per night, bathing this necklace at moonlight allows the hunter to summon a spirit of its slain prey as a companion for a night.
2 – @iammattsanders – The Elder Tooth – This tooth has been in your clan for centuries, it’s origins heavily mythologies. All who wear it have their dreams disturbed by dreams of tearing flesh and the stench of blood, but gain a feral viciousness in combat.
2 – @mountain_foot – The Shark Rider’s Necklace – Once per week, the wearer can travel for 6 hours through or along any body of water connected to the seas or ocean, riding on the back of a massive, phantasmal shark conjured by the necklace. The shark can carry approximately 400 pounds.
2 – @Zerohfx39 – The Necklace of the Allfather – Crafted using the skull of the Allfather’s Raven and and fibers from the thread of fate grants the wearer the ability to know the deepest truths of anything they wish, in exchange the wearer develops an intense lust and addiction for knowledge.
3 – @ShillSphinx – Blundergrim – Inhabited by the spirit of a berserker too lost in the depths of battle-fugue to move on. The head whirls and lunges for something to smash at the first provocation. Can be placated with offerings of fermented mare’s milk.
3 – @vorazunbrews – The Flail of Vornir – As a bonus action, for a minute, you can activate the flail as hellish flames cover the skull and mace. While the flail is activated you are bound by rage hitting the closest creature in your area, dealing 1d6 necrotic damage and immune to charm and fear
4 – @SwordsnFlowers – Scribe’s Candy – An ancient part of spells and rituals. These rocks were put in the cheeks of shamans to marinate in latent magic. It was believed that swallowing them granted favour with spirits until passed out. Now, they are cultural artifacts or edible street imitations.
4 – @eldritchmouse – Rune Stones – Each stone has two sides. Scrape two together like flint and steel to create effects, depending on which two stones and two sides you scrape: a. Fire | Create b. Water | Find c. Earth | Move
4 – @shutteredroom – Orcish Dice – Orcs only have dice with an odd number of faces. Nothing magical about them. There are no orcs in this world.
5 – @trebuchetops – Deathflame Candle –For every minute it burns so does a year of your life. If you lean in close, you can speak through the lavender flame, carrying your words to the dead, who may whisper answers. If allowed to burn the last of your life away, rise as a Charonic Gondolier.
5 – @paperanddice – Life Candle – While this candle is lit all undead within 100 feet are unerringly drawn to it. They must make a Charisma saving throw or spend their movement walking toward the candle, avoiding difficult terrain and stopping in a space as close to it as possible.
5 – @gilaRPGs – Snuff Candle –  Think of your greatest enemy, make a wish and light the candle. Whoever you wished to be dead is dead, as long as you can keep the candle lit…
5 – @RoqueRomeroRua – Skullsmoke Candle – It invokes the souls of people who have died violently in the area and turn them into semisolid smoke skulls. They: 1 answer a question 2 cover all in fishy smell 3 guide you to a secret 4 mark your forehead 5 hurting scream 6 turn u into smoke
6 – @_cloudberry –  Decadent Decanter – This vase is always full of sweet red wine. Drinking the wine will heal wounds and cure ills, but the more you consume, the more you will become addicted to extravagance, insisting upon only the finest rooms, the richest clothes, and the most decadent meals.
6 – @malcolminspace – Amphora of St George – Can be filled with the substance of a dragon’s breath. Stand before the flame, scoop it from the air, carry it with you.

As always in these posts, all credit goes to the illustrious minds of the Twitter D&D community who provide such brilliant, imaginative, interesting ideas so freely and kindly to these Gygaxian Democracy projects. They always outdo whatever I imagined while doodling pictures, and I get such delight seeing so many amazing ideas flow in each time we play these games over there. You’re all awesome!

Thanks to those folks for their contributions, thanks to everybody stopping by to read, and my apologies for the editing liberties I took here and there for formatting reasons!

If you want to chat, these posts are always a good reminder that there’s a happenin’ bunch of tabletop role-playing game artists, authors, designers, and editors over on Twitter (I can be found there as @DungeonsPossums) and you’d likely have a great time of it if you come over and give it a shot!