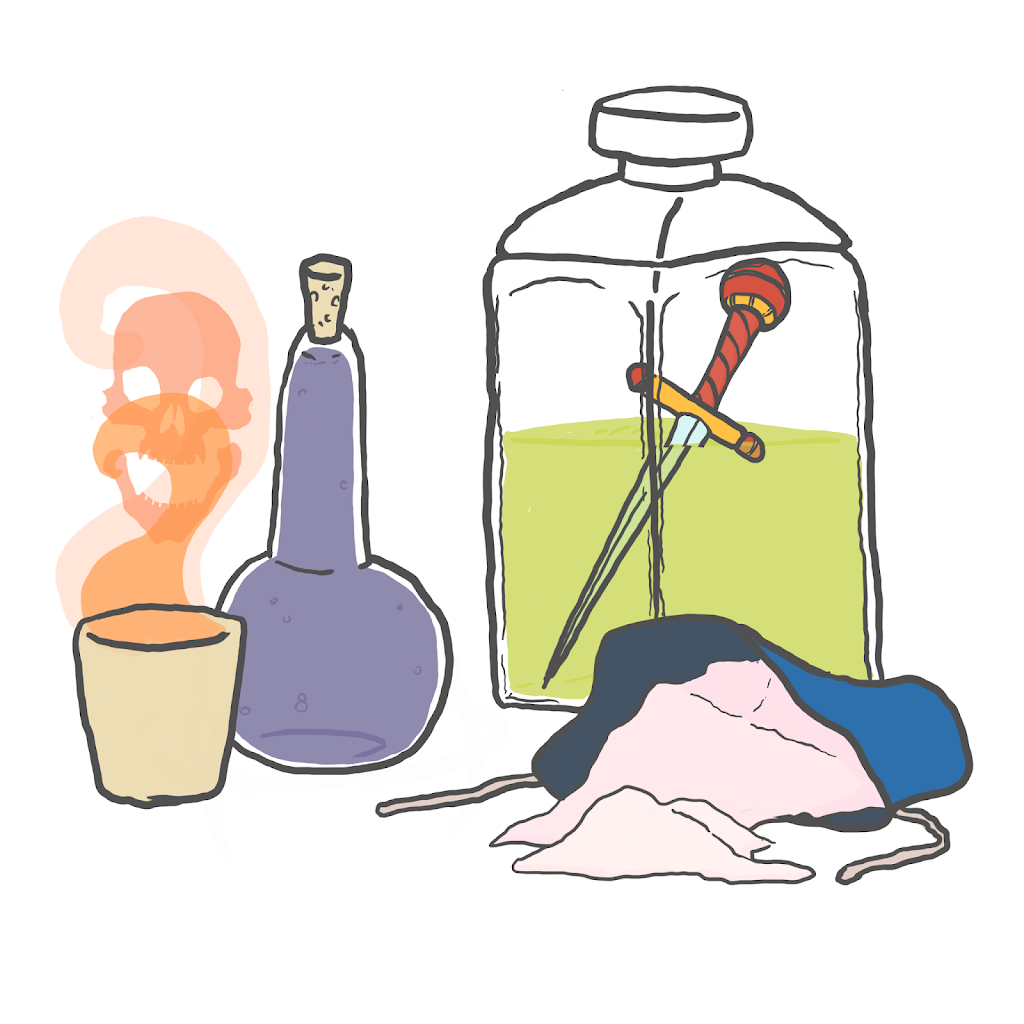 Like all of the TSR-era versions of Dungeons & Dragons, the Moldvay Basic/Cook Expert rules that I favor give each character and monster a Save Vs. Poison stat. As all Dungeon Masters are wont to do, I have always liked to make use of it by inflicting all manner of venomous beast and noxious cloud and infected blade on my players. Since players can reroll a character rather easily, and the same old monsters and weapons become routine quickly, it’s always nice to have some unexpected stuff to throw into the mix to keep players on their toes. I can’t claim to be the first to come up with any such ideas, but nonetheless hopefully someone out there finds value in these ideas.

As Crocodile (Cook Expert, X29); immune to poisons and venom. A tremendous salamander whose slippery amphibious body and malleable skeleton allows it to settle into the muck of even shallow bodies of water and expose almost none of itself until time to ambush its prey. It can also slip through some wide portcullises and grates in moats and other waterways for the same reasons. It has supple skin the color of daffodils and patterned with irregular splotches of darker greens and yellows. Its bites inflict 1d8 damage and trigger a save vs poison – a success negates the venom, but a failure on this roll causes the target to hallucinate vividly and enter a confused state for 1d6 turns, during which time they wander aimlessly at half-speed.

As Mermen (Cook Expert, X36); immune to poison and venom. Sadistic seafaring snake-men with alternating bands of black scales and white scales. Their mouths have few teeth, but they are sharp and poison whatever they successfully bite for 1d4 additional poison damage on a failed save vs poison. They have snake-like lower bodies like naga, but have none of the capacity for sorcery of their distant cousins. Kraits are semi-aquatic (can breathe both in air and water) and form raiding parties that board ships at anchor. They wield tridents, nets, and spears. Their armor is made from gnarled clam shells and barbed fishbones.

As Toad, Giant (Cook Expert, X40); immune to poison and venom. Six-legged creatures about the size of a donkey whose relaxed skin hangs off of them in empty, baggy folds. When threatened, their defense mechanism sees them inflate themselves like membranous ballons, pulling their excess skin into tight bulbs of toxic gas. When attacked, their tin flesh perforates readily and painlessly, releasing immense, noxious clouds. Those in melee range save vs poison or take 1d6 damage and be knocked unconscious. The clouds linger for ten minutes unless strong winds are present to disperse them.

As Dagger (Moldvay Basic, B27); an heirloom said to have been passed on by generations of gifted assassins to their most proficient proteges, this wavy hairpin is said to have been hammered from the seductive silver tongue of an ancient woman who is alternately described as a devil’s consort or an angel beyond the ken of mortal men. It is easily concealed as a fashionable item. It has a reservoir containing one dose of a nasty poison. A successful attack with the Lilith Tongue injects a target with enough toxins to require a save vs poison where gasping death follows a failure in short order. The weapon is still filled with one dose, but the secrets to producing more of the oily poison are kept by the order of assassins.

A highly toxic concoction mastered by the Mistwalkers, an austere order of exiles who seek to earn their way back into elvish courts through acts of service and defense of elvish interests. The value and justification of their actions remains debatable, since much of what they do involves targeted murder and humiliation of those they consider to be going against the elvish crowns. Their trademark methods all involve poisons afforded by the rare flora of the deep elvish woods. Orchid powder is introduced to a victim’s food or water and is marked by its sour flavor. Ingestion is cause for a save vs poison roll. Those who succeed are fine; the dose was insufficient. Those who fail are given catastrophic stomach woes for 24-48 hours which begin nearly immediately and cannot be forestalled, certainly ruining the victim’s clothing and equipment with showers of stomach contents.

Devised by a chirurgeon seeking a potent anesthetic, this derivative of naga venom is worth many times its weight in gold and is known for putting victims into a sleep which can only be broken by the sound of a silver whistle. On a successful save vs poison, the target is made sleepy and rolls with disadvantage (or a -4 penalty) for 1d12 hours. On a failure, the target falls into a slumber and cannot be roused save for the piercing scream of a silver whistle made by a fine craftsman. Best delivered by dart or arrow!

Foxbone bushes are easily picked out of the forest growth, with their ivory bark, rust-colored foliage, and black-tipped flowers. It is prized by many gardeners as a beautiful complement to verdant greens. When burnt and turned into a silvery soot, it becomes an agonizing poison. Any weapon dipped into a solution of foxbone ash and oil can inflict bonus poison damage; on a successful attack, weapons provide mundane damage as normal and then trigger a save vs poison against 1d8 poison damage; success halves the poison damage.

A mix of fantasy and historical elements gives us a few options for poisons here. Grab yourself 4d10 like it’s a White Wolf game and see what you come up with!

If you end up using any of these little poisonous tidbits in your games, let me know! You can try email, the comments below, or Twitter where I am @DungeonsPossums.