Still of the Dead Rabbits from Gangs of New York (2002), which is absolutely posted without written permission.

Thieves’ guilds are a staple of fantasy fiction. We see them constantly; in books, in video games, in tabletop role-playing games. Often, they’re an interesting contrivance to add intrigue and thicken plots – the Macguffin you need traded hands between fences at the Thieves’ Guild, the Thieves’ Guild has taken an interest in your pickpocketing, you need to capture the leader of the Thieves’ Guild. Just as often, they’re a lazy handwave to sweep crime out of the way and codify how a society allows a class clearly called “Thief” (or “Rogue”) to operate and the necessary skills to proliferate. In either case, they’re a largely monolithic entity given some tacit or explicit license to operate.

So, why not have gangs, instead?

You could have an organization doing all the same things for you, but instead of a drab grey and brown group of sneaky broken-nose thugs in an obvious clubhouse in the sewers of Riften you could have a group of sneaky broken-nose thugs with bright banners like the Dead Rabbits in Gangs of New York just straight up parading about in the neighborhoods they utterly run with music and fanfare fit for a returning conqueror. This is a no-brainer.

You can achieve the same goals as you could with a Thieves’ Guild by having a big ol’ criminal gang – the transfer of critical roguish skills, the stalemate cold war with the city guard, the begrudging acknowledgment of the League of Extraordinary Wizards. But instead of saying, “So you all go to the Thieves’ Guild,” you get to say, “So you all go to the dockside beerhall hideout of The Elf Mafia.” Would you rather say that the Queen allows a collective of thieves to steal a little but not too much!! or that the Queen is a realist who lacks the means to collectively halt crime and has to accept that the Sunken Quarter, rife with crime, is better off run by The Bloodsleeves than left to chaos? Is it better to say your character was taken in as an apprentice pickpocket by the Thieves’ Guild, or that your character was pressed into service as a pickpocket by The Sons of Kings in the market district? Imagine if, instead of solely having conflict from the authorities or ambitious upstarts within, you also had the option of gang warfare riotously erupting in the streets – and the responses to that from townsfolk and elder warlock alike?

The lesson here is that you need a gang or gangs running crime instead of Thieves’ Guilds arbitrarily set up like some kind of dues-paying union that somehow townsfolk are okay with for no clear reason. To that end, here’s some gang names:

Roll some d12s and create yourself a gang with a snazzy street name. Don’t worry about being taken seriously as the Whistling Bunch, because all you need to do is have a pack of them casually whistle a jaunty, friendly tune while viciously carving a beloved barkeep open with jagged knives and it becomes really easy. The Wild-Eyed Riversharks are at war with the Greasy Saints because they were deceived by the Sixth-Generation She-Devils? Excellent news, this means the Palace Bunch will be on the move. 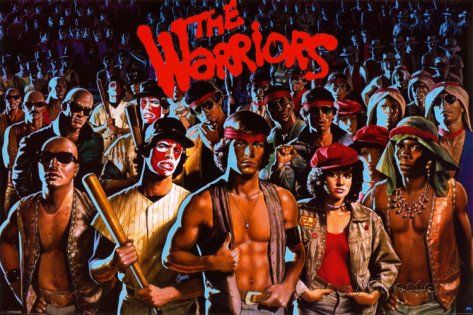 Promotional poster for the excellent film The Warriors (1979), also used here without asking the studio first.

What’s a gang without territory? If you have a big city that needs multiple gangs, giving each one a home stomping ground not only gives them substance but it helps flesh out your city by naming and stocking whole districts and areas. Roll some d12s here and you’ve got yourself a neighborhood. Now you’ve got Jannik’s Bunch from Blackstone Parish, where they inhabit a dilapidated farm shack.

And now we have a gang leader to relate to! All the street crime in this town goes through Fat Orlov, or Fat Orlov’s blade goes through you! You want to heist the jeweler’s caravan? You better run that by Lady Bowery. You need someone who can steal the fabled cufflinks of Emperor Reagan, you put word out to Rufus T. Barleysheath.

In all, I feel that gangs are far more versatile and organic than Thieves’ Guilds, and, dare I say it, realistic. There are more avenues of conflict and intrigue, varying levels of legitimacy from gang to gang, more believable reasons for their existence and it even makes sense for them to have chapters in different towns.

You should hopefully have come over to my way of thinking now. Ideally. I think everyone can plainly see that gangs are a way better idea than Thieves’ Guilds. Whether you agree or disagree, I am curious to know what you think. Why do you prefer Thieves’ Guilds? I am especially curious about that, so hit me up on Twitter where I am slowly forming a gang Twitter Guild under the alias @DungeonsPossums.

3 comments on “Some Thoughts on Thieves’ Guilds”