Updated on 22 April 2020 @ 0859 to include The Bone Marshes and Nate Treme’s bestiary. I have had the bestiary open in a tab for five weeks and Bone Marshes is one of the best hexcrawls ever and I somehow forgot both. Cheers to TheManWithAHammer in the OSR Discord for reminding me of David’s great work!

It’s the stripped-down, easy-as-pie, simplified old-school role-playing game made by the lovely Benjamin Milton. It works with just about any adventure or supplement you have on hand – modules, bestiaries, and more, meaning your existing library works as-is or, if this is your jumping-off point to the OSR, it will work with whatever you find yourself buying later.

It’s also a great thing to design for because it’s free to use as a base and distribute (with attribution) and it’s simple to work with. Several redesigns and hacks exist out there, produced by DIY enthusiasts just like the rest of us.

On that note, one of the ways you know it is fun and pleasant to work with is that so many creators of all stripes out there in have produced free tools, expansions, hacks, and more for the system. I figured a good thing to do might be to assemble some of them here for you all! 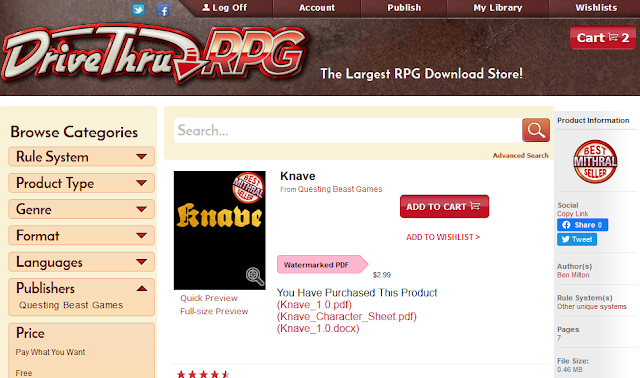 Naturally, the first place to start when you want the rules for Knave is to go straight to the source! Ben Milton’s original version of Knave is available at all the likely sources, including DriveThruRPG – it’s inexpensive, it supports him, and it includes a .docx file with the original text so you can get a jumpstart on making your own hack of this lovely game. It’s a good buy and you could spend $2.99 in much worse ways! (While you’re at it, cop Maze Rats, Ben’s other game – it works with Knave and has a lot of cool tables in it).

If you don’t have the scratch right now to support Ben’s work at the moment or you want to give it a try first before you do so, there’s some examples that are free for you!

First, Pulpatooner over at An Abominable Fancy has produced The Fancy Pants Edition of Knave, which reformats and expands the book with content from a couple places, including the G+ community and Ben’s other game, Maze Rats. Versions here for US Letter, A4, and tablet usage.

Second, Vitaliy Shershun, back in the days of G+ and the DIY/OSR circles there, produced a nicely formatted version of his own, putting together a cute character sheet too!

Either of those two releases will put the rules in your hand (nicely formatted, to boot!) and get you running a good, solid game system right away.

David Schirduan’s Knave PC generator is exceptional. It may be my favorite, though I think everyone’s versions are probably pound-for-pound equal at the end of the day on a functional level, or close to it.

Elegant, lovely, and extremely well-timed: Twitter’s @wereoctopus put together this outstanding generator as I was in the midst of writing this article. I cannot recommend it enough!

Chris Perry Wolf’s Knave generator is clean, straightforward, and printer-friendly out of the box.

Character Sheets and Such

Over on Reddit, u/DJKane has offered their own character sheet for those who prefer to generate their doomed adventurers the analog way.

Github has a user named theresthulin who brings us a stunning character sheet which clocks in with a huge, unoptimized PDF filesize, and the Adobe source files to work on it.

Vandel Arden over on itch.io compressed the ruleset into a single-page reference sheet for use at the table by players, both new and veteran alike. It obviously feels a bit cramped, but the readability is alright and the utility is unbeatable. Includes Adobe source files in your download so you can use it as a base for your own Knave hack!

There’s a few variants of Ben’s rules out there. These differ from his set and I haven’t played them to know how they panned out, but it’s cool to see people making things and sharing them!

Glaive is the work of Scott Wegener over at the Camping with Owlbears blog. A professional comic artist by trade who has won many Eisner awards for Atomic Robo, Scott put together a successful Kickstarter campaign this past ZineQuest 2020 and surely that will arrive on the public market soon. In the meantime, you can raid his blog for the source document.

Brave is another hack by DwizKhalifa and can be found at the A Knight at the Opera blog. Two elements are at play here – first, a rules expansion; second, a class hack to change up gameplay for players.

Grave is by Jason Tocci and can be found on itch.io for fans of Dark Souls and its related sequels and spin-offs. This hack brings in evocative themes from the grim, deadly fantasy worlds of these video games, along with some mechanics to replicate the experience at the tabletop.

Back again is Reddit’s u/Kalahan7 with Knave Rats, which combines Ben’s two games into a singular entity combining u/Kalahan7’s preferred elements of each. Alternative versions borrow from more games and strip the character creation to function as portable rule reference sheets.

There’s definitely a culture of DIY supplements supporting Knave. Many people are taken by the ease of working with the rules and the open licensing of doing so, making it a popular choice as a base for many people.

A popular option is Rakehell, by Brian Richmond of The Goatman’s Goblet. Terrific random tables, a pleasing old-school layout, and a great hook: dreg of society that you are, you must go to a contested region plagued by undesirable problems for the enrichment of your social betters – but, through wit and greed, you can take it for yourself. You can expand your time here further with two great modules, The Bandit’s Manse and The Maw of the Mountain.

The ever-creative and wonderful Nate Treme put out two pamphlet dungeons to his Patreon crowd, available also of course to everyone else as PWYW PDFs. First is Temple of the Bat Serpent, about a cursed mountain monastery, and the other is The Mephitic Laboratory of the Pescamancer – which wins an award for its title and its adorable 8-bit Gameboy artwork within as far as I’m concerned!

Nate also produced a bestiary for Knave, which is extremely reskinnable and its format served as the basis for my own brief bestiary in the Wychbarrow adventure.

Ben Milton’s own Maze Rats/system neutral adventure (a recurring theme in this article is how Maze Rats basically converts over instantly to Knave) The Alchemist’s Repose is a cute little one-page dungeon you’ll likely enjoy.

One of the best hexcrawls ever – and shout-out to TheManWithAHammer on the OSR Discord for reminding me of my grim failure to include it here – is David Schirduan’s The Bone Marshes. I cannot recommend this book highly enough and you could do much worse with an enthusiastic old-school group than to explore this map!

The Library Beneath the Sands is a one-page dungeon adventure for Knave by Jonathan Dersch. Knave’s simplicity and easy pickup lends itself well to short pamphlets like these, which is exactly what I think many old-school gamers look for.

Mr. Dersch also produced the 13 Story Bazaar supplement which allows for generating linear towers on the fly, procedurally, with lots of whimsy and interest tucked away. Bonus (and probable discussion for another day; the backlog of this blog is endless) Troika stats and features included as a free content update, for those of you into that game system as well!

Lastly, my own Descent Into The Wychbarrow dungeon adventure, which pits players against a very small, rather linear little dungeon to solve a mystery of some lost children.

In writing this article I reached out to Ben directly to be certain Knave could be shared the way you see it here, including the full rules in various free distribution, without ruining his day. He gave his blessing and, of course, stood by the DIY attitude and attribution model of sharing that Knave has always had. Super cool stuff!

I have had a great time playing Knave with my wife and children recently. Truthfully, it has kind of supplanted 5th Edition for them lately – something I haven’t had quite as much luck with using pure B/X (which intrigues them but requires maybe more engagement with rules and the full gamut of OSR concepts and gaming). Because I so enjoy it, I am secretly cooking up some Knave stuff to post sometime down the line, but my real-life free time is incredibly limited so I won’t go into too much detail right now so as not to promise too much. But, y’know, watch this space!

Anyway, if you are also a fan of Knave, or Maze Rats, I would love it if you suggested great additions to this page so I can update it later! If you have suggestions or if you just want to talk about any of these things, then I suggest kicking it with us over on Twitter! I can be reached there where I post too damn much as @DungeonsPossums, and Ben Milton is over there at @Benjamilt. Thanks for stopping by!