It’s that time again, friends! Here before you are three more blogs I would like more eyes to fall upon, even if they’re already getting more views than I could possibly send their way! And, like last time, if you make it all the way to the end of my unsolicited opinions about blogs, I’ll give you what you came for: a Joesky tax for your greedy little hands to scoop up and cram into your little dungeon hoards!

If blogs are the pillars of the old-school D&D community, then surely Anne Hunter’s DIY & Dragons is among the most amazing, load-bearing, noteworthy pillars of the bunch. I consider it one of the best blogs that our silly dice-game hobby has influenced and inspired, so much so that I remember being highly suspicious when Anne circled me on G+ because I presumed it was a fake account at first – why in the name of Crom would the author of DIY & Dragons be adding me to her circles?

Anne’s blog is multifaceted. Like many of the best blogs, not every post is strictly D&D-related, but always it contains incisive thought or interesting ideas which inspire and excite. She also puts together articles that may be best described as news; she rounds up posts and ideas and it becomes a one-stop source of new things to read, new people to follow and lesrn from.

Anne is also a prolific creator and her work can be found in a ton of places, often without the fanfare it deserves. It can be tough to find her on author listings and stuff but then you open a zine or a book and there she is, writing a segment or being credited for statting up a large cat monster or whatever. She has ten times the credits she’s listed with and deserves a hundred more!

From the Sorcerer’s Skull by Trey Causey

Trey Causey is one of the cruel, twisted, sneering, snake-like heads of the Hydra Cooperative. His work is lauded when it shows up in book form – not nearly often enough – but his active and very long-lived blog is an exceptional place to go for the source material. His raw thoughts, especially his reviews and visitations of older works of fantasy and fiction and gaming, are invaluable fodder for our elfgame addiction. Seeing Trey talk with great insight about comic books, 1930s pulp novellas, and Talislanta in the same year is a particular joy of mine. His blog is not solely gameable material, as we like to call it these days, but his game reports and his clever approach to dissecting media without losing sight of its enjoyment is pure fodder for creativity.

Trey is a gifted author and editor who I am sure has honed his craft with lots of hard work but who makes truly smart insight and attention to detail seem effortless. I especially like to read his looks at media we all consider foundational or inspirational (sometimes without even knowing we do) because he has a good eye for breaking it all down and making it digestible and understandable without running up 20,000 words per topic like one of those ten-hour Youtube reaction-to-a-reaction-review videos that pollute the internet in this dark age we inhabit.

I could use more books by Trey in the world, but this post is about his blog, and so I’d suggest you read the hell out of his backlog if you also need more Trey Causey words in your daily nerd diet.

There is nowhere near enough attention given to the works of Brian Richmond over at Goatman’s Goblet. That’s a flat-out statement and you could stop here if you wanted. His work deserves more attention, straight up – Rakehell seems to have achieved a certain level of appreciation, at least enough to justify SoulMuppet Publishing producing hard copy versions and to justify Exalted Funeral’s interest in carrying the book on their storefront, but it shouldn’t stop there. His work should be in a lot of conversations, and I think his continued output will be interesting – he has quietly been producing some seriously excellent stuff and his blog is a window directly into both those products and the things he, thankfully, makes for the joy of it and shares with all of us. I think Brian is on the cusp of being a very commonly-discussed person in this hobby as his work really stands out.

Brian is good at generators and roll tables, good at moody and atmospheric creations large scale (Rakehell) and small scale (zinis for neighborhoods and towns) alike, and good at giving us a sort of director’s commentary as to what he is designing and how and why.

Here it is, you miscreant! Do me a solid and click those blog links above and bookmark them or add them to your RSS feed or something, just to make me feel better. 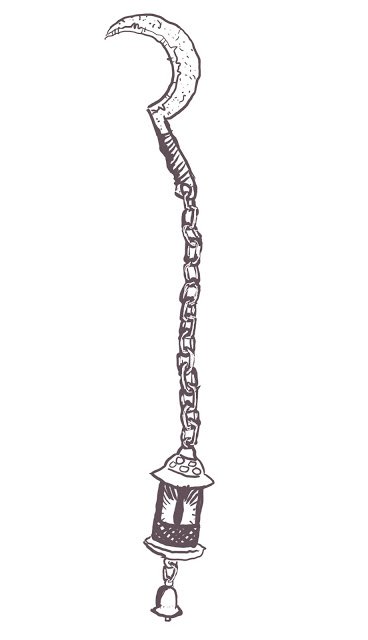 What Is This Weird Weapon

Okay, I hope that magical item/roll table/thing appeases your need for dicegame stuff this time around. More to the point, I hope you found some blogs to follow and keep up with. Their work is eminently worthy of your limited and valuable time. If you agree, disagree, want to yell at me for not listing yours instead, or something of that nature, post in the comments below or over on Twitter where I tweet too much as @DungeonsPossums!

As a post-script, I’m not sure if I must offer attribution but I’m gonna anyway – the header gif comes from the lovely little generator over at TextAnim and made me feel like it was 1999 again!

One comment on “Three More Blogs I Think Are Swell”