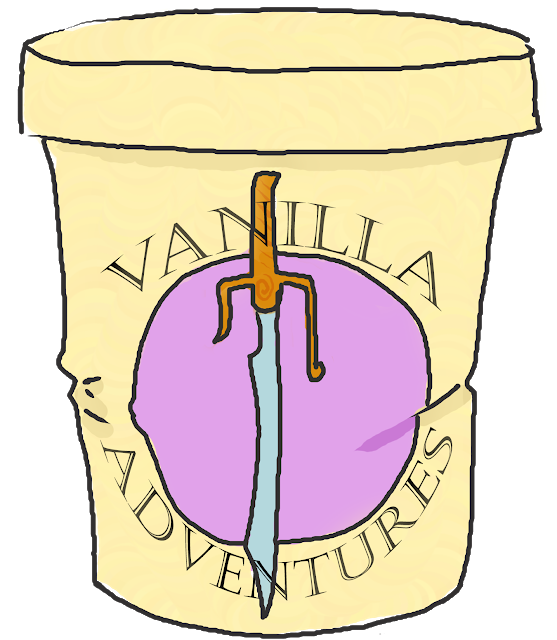 It’s supposed to be ice cream? I guess?

Trey Causey, one of the wonderful, snake-like heads of the Hydra Cooperative, posted a pair of articles over on his blog in the past little bit: first, My Secret and Possibly Quixotic Yearning for Vanilla, where he examines why he regularly wishes to play a stripped-down basic western fantasy setting without subversion or borrowing from other genres and ideas; and second, My Flavor of Vanilla, in which he describes the central influences and tenets of his version of such a “vanilla” western fantasy setting. As you can tell, I come by my own blog post titles in a dignified and wholly original manner. But I thieve in good conscience today, because I wanted to write my own down for absolutely no discernible reason.

I think Trey summed up the strange yearning I also occasionally have to play in the “default” kind of western fantasy, so I probably don’t need to rewrite it myself; sometimes you just want to lean into the genre notes. What I have in mind for the setting itself is a bit different, though, so I figured it might be fun to play along with Trey and list the influences and notes I’d draw from. In the past, I’ve written about diversion from the medieval European norm of fantasy and my preference toward playing D&D in a bronze-age collapse sort of era where the works of Robert E Howard and Jack Vance are far more influential than those of Tolkien. That’s my default, so this article I guess is more of a “ignoring that article, here’s what I’d do.”

Once Upon A Vanilla Campaign…

I would still trend heavily towards the points of light concept. It’s just the best description of a wide world ripe for exploration and conquest. But here, rather than bits of surviving civilization amidst the ruins of old empires of lost ages, the points of light are simply which bits, of the huge world, have thus far been settled. Roads wind and twist between pieces of civilization, but the rest is not mostly lost, it is mostly undiscovered.

I would assume a world of verdant greens, as the more British model of fantasy does. Pastoral villages, emerald hillocks, lowlands with marshy tendencies. Fewer mountains, no jungles. Dark seas, all four seasons, and no hot desert sands in sight.

I would have elusive elves who once held court over great swaths of land long ago but who have since retreated into myth and hearsay. Frontier folk claim they are still out there in the deepest hearts of mazelike woods, but educated cityfolk and egocentric nobility know these are tall tales to excite the taproom. These elves would be shorter than men, slight in stature, light as a feather, rare as hen’s teeth, and given towards bows and arrows. They would occupy Ewok villages in the tree canopies of enchanted woods that repel and confound interlopers. The ruins of their gilded age, abandoned for unknown reasons, are wild places for the players to explore and probe for secrets and explanations.

I would have kingdoms with knights and men-at-arms. They would be responsible for the safety of small areas where the peasants may farm in relative peace and quiet. Most would be just, and given towards worship or lip-service to the church. Though each of these kingdoms would differ in minor ways, they would be generally lawful and goodly sorts of places where evil is frowned upon. I would have them be threatened by insidious creeping corruption from within, where these bright and shining places are falling, one-by-one, to demonic actors.

I would have the humans of these kingdoms, baronies, and duchies be mostly (on paper, anyway) monotheistic, following the rites and rules of the Blessed All-Mother, who promises an eternity of peace and joy to those who lead good lives of honor. I would have rural and “lost” places clinging to old spirits who may or may not be real.

I would have a villainous faction: a grand army of evil conquest marching across the land, putting sword and torch to all in their path. Their barbarity is absolute and whole populations are converting, fleeing, or perishing. The army is commanded by enchanted warlords who consort with devils, and who in turn answer to a vile demonologist and necromancer who may in fact be a lich. They corrupt their soldiers with devilish mutations (tieflings? orcs? – just flavors of evil humans turned alien by contact with demons) and raze villages with hellish green flames. The skies above their march are filled with dancing lights not of this world, reflecting the gates to the dark realms opening ever wider as they progress across the land.

I would have prophesied weapons or items out there in the wilderness and lost places, possibly of elven make. Somehow these would be tied to undoing the evil army and ridding the world of their devil-worship.

I would have wizards in robes, in secret and intermittent contact with one another through sorcerous means both obvious (crystal balls?) and arcane (summoning and instructing flocks of birds at each other to transmit byzantine auguries). They would have a loose confederation, possibly contentious but with some appreciation for the fact that they are largely countable. These powerful wizards would command great fear and respect and be mysterious and beyond the scope of mortal men. While small-time hedge witches and petty magicians exist and are regarded with alternating interest and suspicion, filling the role of healer and oracle, they belong to an altogether different caste of spellcaster. These minor sorcerers would not be privy to the machinations of the wizards firsthand, but would perhaps sense big changes. Rumors from animals, whispers on the wind, that sort of thing.

I would have fairytale beings, like hobbits or gnomes or dwarves. They’d be short, and maybe a little stocky. I have no idea if I’d invent a word, pick one, or use all these terms interchangeably. They’d be craftsmen and known for fine work, and live in communities of their own in hillsides or in small neighborhoods of mostly-human settlements in general peaceful coexistence. They’d have long, byzantine familial lines which means I’d get to play running jokes where every dwarf is the last hobbit’s third cousin, twice removed.

I would bring back the idea of tiny pixies or fairies, like Tinkerbell and Navi and Thumbelina. Glimmering, shimmering, wee little people who hide in secret places. Groves, stone circles, obelisks, and other strangeness found in the wild and expansive In-Between (the untamed, unknown lands between points of light). These people would be curious, coy, riddlesome folk whose interactions with humans border on the bizarre or the harmlessly and humorously antagonistic.

Some key literary influences here would be the early 90s novels in the Recluce series by L. E. Modesitt, Peter Pan by J. M. Barrie, the King Arthur/Merlin/Excalibur legends in their infinite tellings, and, of course, The Lord of the Rings. I prefer the Hobbit over The Lord of the Rings to a tremendous degree, and I feel like my normal games eschew big epic tales for more focused ones in that vein. I think in a vanilla campaign I would make sure to at least have the threat – the option – of mighty evil deviltry and a great conquering army with a big bad boss to oppose as heroes. It’s kind of the opposite of what I usually favor, which is a more episodic, individual threat and reward kinds thing.

It’s no surprise I lean towards a Conan-style fantasy world filled with various perils and treasures and allow stories to form organically from the adventures that develop. In this case, though, in pursuit of Vanilla, I think I’d at least position pieces on the chess board a little differently to encourage interaction with some kind of plot or threat beyond the immediate. It might all fall right back into graverobbery and overindulgence in unknown psychoactive wizard drugs in a fashion modeled more after pulp adventure akin to The Usual, but I think this is the flavor of Vanilla I’d at least put on the plate. To that end, I may use D&D5E to run this, or maybe I’d go buckwild and play AD&D2E and really punish my family.

There are an infinite number of variations on Vanilla western fantasy out there. There may be an infinite number of them in my imagination or at my table alone, honestly. I hope you enjoyed reading my Trey Causey copycat article and seeing what Vanilla might look like over here. If you feel like your general table style is very different from Vanilla, as many of us in the OSR sort of space do, maybe you’d like to play along and share your version on Vanilla – what you’d include, what you can’t abide, what you absolutely must tweak and change, what you like, what influences your idea of middle-of-the-road western fantasy. If so, I look forward to reading it, and I hope you’ll let me know about your own article by shouting at me over on Twitter @DungeonsPossums!

3 comments on “My Flavor of Vanilla”