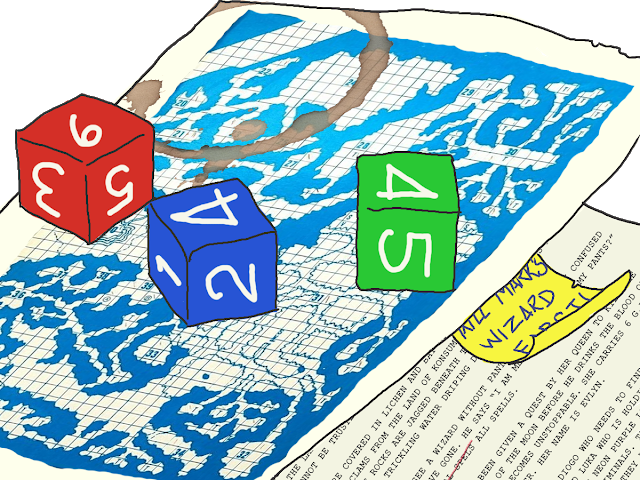 Thanks to TSR for this map from D1-D2 Descent Into the Depths by E. Gary Gygax, used utterly without permission.

Over on Twitter, I often fill time with brief little 1d6 tables as the feeling catches me. I also occasionally think them up besides, and sometimes I even remember to write them down. For the benefit of those of you who don’t use Twitter, I’ve collected these here in this post; for the benefit of those of you who do use Twitter, I’ve also added a few extra tables here that you haven’t seen before. Hopefully everyone walks away with something new and neat!

1d6 New Patrons That Usurped The Warlock’s Prior Contract

As always, I hope some small piece of this collection finds its way onto a table somewhere out there. I think that’s why we all do this in the first place! Ideally some of this is the solution to a problem or breaks through an inspiration gap for somebody. In the event that it does, shoot me a message on Twitter @dungeonspossums!

(the full text of that nonsense dungeon key page is as follows:

THE HALLWAYS ARE COVERED IN LICHEN AND BAT GUANO. EVERY SO OFTEN, CLUSTERS OF RADIANT CAVE CLAMS FROM THE LAND OF KONSUMTERRA GLIMMER IN THE DARKNESS LIKE LANTERNS. THE ROCKS ARE JAGGED BENEATH THE LICHEN. SOME AREAS ARE SMOTHED SMOOTHED BY TRICKLING WATER DRIPING DOWN FROM ABOVE.

IN THE FIRST ROOM YOU SEE A WIZARD WITHOUT PANTS AND HE IS REALLY CONFUSED ABOUT WHERE HIS PANTS HAVE GONE. HE SAYS “I AM MERLIN, WHERE ARE MY PANTS?”
HE HAS 31 G.P. AND KNOWS AL SPELS ALL SPELLS.

THE SELKIE IN THIS ROOME HAS BEEN GIVEN A QUEST BY HER QUEEN TO KILL THE ICE VAMPIRE FROM THE DARK SIDE OF THE MOON BEFORE HE DRINKS THE BLOOD OF AN ANGEL IN THE SACRED TEMPLE AND BECOMES UNSTOPPABLE. SHE CARRIES 6 G.P. AND TWO SHORT SWORDS PLATED WITH SILVER. HER NAME IS EVLYN.

THE 10TH ROOM HAS A LOST MINER NAMED DIOGO WHO NEEDS TO FIND ENOUGH ENCHANTED SALT TO EXORCISE A WRAITH NAMED LUKA WHO IS HOLDING DIOGO’S TOWN HOSTAGE AND FILLING THE SKY WITH DEMONIC NEON PURPLE LIGHT AL NIGHT THAT ATTRACTS RAVENOUS HORDES OF BEASTS AND CRIMINALS. TIME IS RUNNING OUT. HE WILL ATTACK THE PLAYERS FOR THEIR SAILT IF THEY HAVE RETRIEVED IT FROM ROOM 32.

all typos are intentional I guess; it was meant to look amateur. Much love to Evlyn Moreau, Chris Tamm, Diogo Nogueira, Luka Rejec, Karl Stjernberg, and Merlin.)