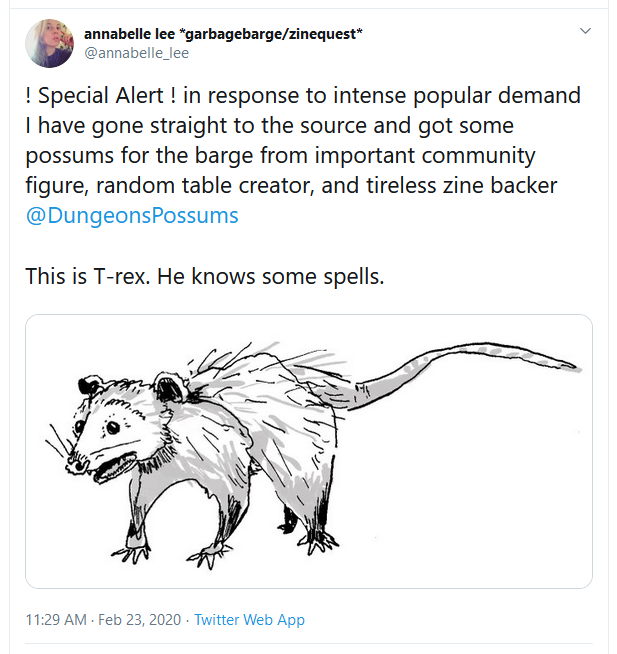 Care of Amanda Lee Franck’s Twitter
I WROTE A TINY THING FOR A BOOK FOR ZINEQUEST AGAIN!
A couple weeks ago, while I was in the hospital with my wife, I received a Twitter DM from Amanda Lee Franck asking if I’d write up some possums for YOU GOT A JOB ON THE GARBAGE BARGE (which has a ZineQuest Kickstarter campaign ending in like 40 hours as of this writing), which I had already backed the very first second I saw it because it’s an OSR adventure sandbox in a weirdly-grounded gonzo mini-setting centered on trash and if that’s not incredibly on brand for me and this blog I don’t even know what is. She even gave me the work-in-progress manuscript (which is ridiculously full of content already and ABSOLUTELY AWESOME) to give me a feel for the content she’s already produced for the book.
Naturally, I said no.
Seriously.
She offered me way above the Big Company per-word pay rate (and above the indie darling “pay your writers this much!!” mantra, too, because she’s a saint) and gave me free rein to produce whatever content I felt like producing (as long as it was about possums). That was straight up her opening gambit, no begging or negotiations needed. Just a direct offer.
And I said no, because I was and am in the midst of a bit of a real life garbage fire and I didn’t want to take a chance having her promise something I couldn’t deliver and damage her project or her reputation. It’s no surprise to readers that I was wildly late giving the unbelievably kind and wonderful Michael T Lombardi the completed zini for Beneath The Canals because last year was also a garbage fire for me; I didn’t want to do that again. So I said no.
But I couldn’t stop thinking about possums and laughing, which is genuinely and sincerely totally normal for me, so I started to write about a passel of possums for the garbage barge in my spare time.
When I was done, I had a few frantic possums. I didn’t want to dominate her project or put too much of my dumb voice in the midst of her unique sound and ideas, or overflow her layout or anything; I had no idea how much room she had for my dumb possums. So I just kept it small and fun.
And then I sent them to her anyway like two days after she asked me and I said no because I couldn’t help myself.
And, graciously, she excitedly promised to put them in the book and even illustrate them – and to announce it as a surprise when the time was right and the blood moon hung low in the house of Saturn (I may have taken liberties with the retelling of that last part).
I am ecstatic! I really, truly am. This is a real highlight for me and brings me an immense amount of joy and pride. I can’t stop smiling.
A word for full disclosure purposes: I (hopefully politely) declined to be paid. Again, to her credit, I must stress that Amanda opened with a big and generous offer, unprompted and completely sincerely, which is a tremendous reflection on her kindness and obvious confusion as to the quality of my work. But I said no, because I’d rather she keep those dollars for herself after all the hard work she’s doing, or give it to a charity, or put it back into art or ZineQuest somewhere or something. I was flattered and astounded and I have nothing but the kindest things to say about her offer, but I really wasn’t gonna do it at all initially and I also wrote very little and it’s better this way. Next time, I’ll rob her blind, like the barge raccoons would do.
Therefore I feel utterly justified in demanding that you back this book that my dumb words are (briefly) in:

Click here to go to the garbage barge and give your money to a sentient oil drum who was gonna mug you anyway
I’m not above torture for those of you who fail to back this Kickstarter.
Above all, though? I really hope anyone who backs this book enjoys my tiny contribution of horrible little disaster possums. Amanda’s book is going to be completely amazing, I am utterly in love with everything I’ve seen in it, and I really, truly hope you all like the possums as much as I enjoyed writing them.
But no matter what, if you want to yell at me for this blatant promotion or just dance in a giddy craze with me about the fact that my idiot possums are gonna be in a fantastic book, you can always find me on @dungeonspossums on Twitter, where I cannot hide from your mockery or invitations to dance.