It’s been a little while for this! Honestly, I feel extremely rusty and despite having an unlimited amount of inspirational material in birds, I kinda overthought and rethought and stalled on parts of this. I am gonna chalk it up to being really distracted with real life stuff this week. Anyway, on with the show! 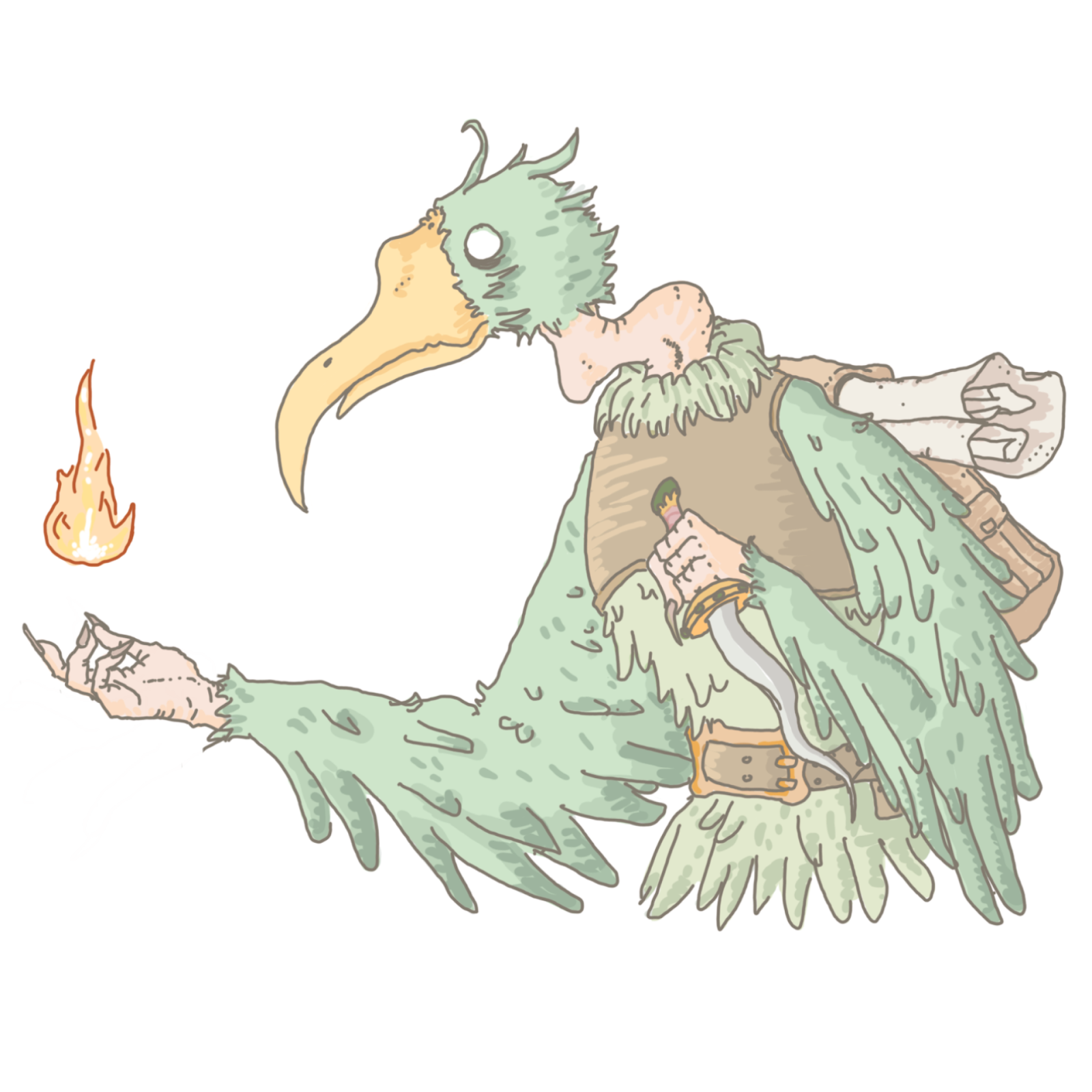 Behold the proud ornithereans, who call the mountain passes and craggy cliffsides home and have since time immemorial. The ornithereans are believed to be an ancient people whose origins trace back to ages before mankind, but since the capricious fellows are known to be disorganized and decentralized, no cogent record exists. And, because they’re nothing if not full of personality, the records that these avian folk have kept are contradictory at best. The inquisitive birdfolk are quite independent, almost to a fault; so much so that their communities fragment constantly as individuals strike out on their own. Far from hosting mighty empires and cities teeming with life, the ornithereans are scattered in countless small, windy aeries neighboring each other as each generation seeks a space of its own. Often, emptied haunts are reused decades or centuries after the first ornitherean nested there, many years since it was last inhabited. Because they are often attacked by many wild beasts with a taste for poultry, they have adapted such that all ornithereans may lay eggs and all ornitherean egg clutches are laid year-round.

The ornithereans commonly harness weak magics, and have a greater-than-average likelihood of producing archmages. Most of their peoples are capable of minor spellcasting. The ancient species has become adapted to various environments as they’ve spread from range to range; it is not unlikely to spot downy, tufted, squat ornithereans near snowy conifers and, many leagues away, see lanky ornithereans with bright plumage and complicated feather patterns. Their diet is largely omnivorous, though, like their specific appearance and size, local populations are impacted greatly by adaptation to the bounty of nature. The ornithereans, being creatures of opportunity and curiosity by nature, are attracted to lives spent journeying. They are often fixated on baubles and riches. Favored weapons of the ornithereans include slings, bows, wicked daggers, and slender spears or javelins. They are not fond of armor or shields, and are penalized for wearing much of anything at all.

Your hollow bones do not support armors and heavy metal weaponry; you are of an ancient people whose history is unclear and tied to sorcery – and likely have access to minor magical effects yourself, as a result.

Natural Abilities
Glide: 1/day
You aren’t a soaring eagle high in the sky. At best you’re a chicken, capable of flapping the hell out of your mediocre wings to make your landing a little softer. Once per day you can give it your all to slow a fall to a safe speed and land in one piece.

Iron Stomach: Passive; 1/week poison save bonus
Fermented fruits, sun-seared carcasses, and even many poisons are not enough to damage your sturdy guts. You can safely metabolize food of any kind, and alcohol cannot intoxicate you. Once per week, roll 1d4 and subtract it from any mundane poison save.

Mimicry: 1/day
Regular exposure to sounds allows you to incorporate them into your songs, like a man-sized magpie. Once per day, pick any sound or short sentence you have heard and roll 1d20 under Charisma score. On a success, add that sound to the list of sounds you can reproduce at will.

Minor Magics
At character generation, roll 1d6 on this table; note down the result.

Class Level Table
Each level, naturally, as a title, requisite experience level, and additional details.
Random Advancement Table
Roll on this table once each time you gain a level with a d100/d% and record the resulting benefit on your character sheet accordingly. For any questions or discretionary items, consult with your DM or referee.
Well, I posted some content. I am very rusty and it could be better, but I guess I’ll take it for now. Maybe I’ll revisit it some day in the future. In the meantime, those of you running old school games will hopefully give these bird dudes a shot in your worlds and see how it pans out for you!

As always, you can reach me once again on Twitter @dungeonspossums if you have any thoughts or just want to say hi and chat about RPGs!