As I write this, I am in the midst of a sort of eye-of-the-storm moment. Lately I’ve been in and out of doctor’s offices and emergency rooms with my wife, who has had a bit of a rough patch lately. Therefore, I am very thankful for this calm, boring Sunday afternoon at home with my wife. It’s the best kind of boring, given the ridiculousness of the past few weeks.

Naturally, I used this time to draw a monster in MS Paint. 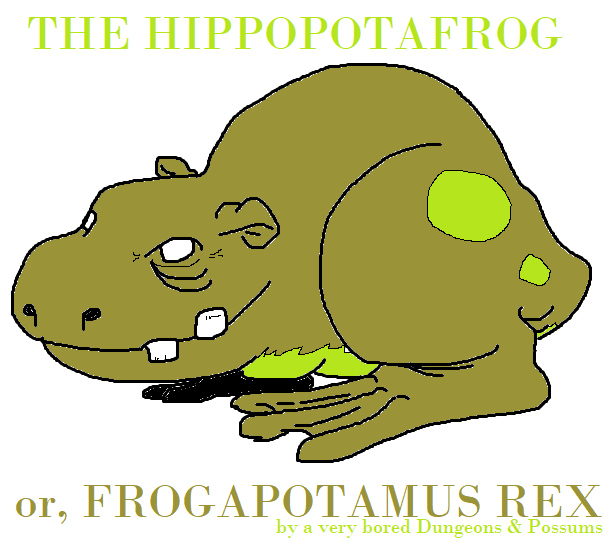 Brag: I drew this toad/hippo monster with a mouse, which is just too many animals!

Actually, two monsters, because you get two options here.

First, you can have a beast, wild and untamed:

A massive wetland creature known for its laziness and omnivorous appetite, the Hippopotafrog is generally difficult to perturb. They take little notice of happenings around them unless they directly concern them or their immediate family unit; few predators have the size or numbers to take down one of these powerful beasts. They are suspicious of humans, but unless approached aggressively or provoked in their territory, they will merely warily watch with most of their hulking mass concealed beneath the swamp waters they call home.The hippopotafrog can move rapidly when necessary by making huge leaps with its powerful legs; it also uses this to land on foes and crush and maim them. If slain and field dressed, the belly of the beast usually has a few nuggets of gold from straining the silt of the swampy waters through its huge mouth looking for snacks in the form of small bottom-feeding freshwater fish.

Alternatively, you could decide there’s just one of these giant jerks. He is the big bad daddy of the toadfolk and lizardpeople in the mangrove swamps – he is Frogapotamus Rex!

Frogapotamus Rex does not have a statblock, because he is a petty god and therefore you should have to think a little outside-the-lines and away from a character sheet to slay him. He does, however, have sort of a character notecard, and it is appended below:

Whereas the Hippopotafrog is a large natural beast, Frogapotamus Rex is a force of nature itself, a one-of-a-kind monstrous petty god. In many ways, such as size and terrifying presence, the King of the Frogs is akin to the slippery, demonic creature Thaug from the Robert E Howard Conan story, A Witch Shall Be Born. Big ol’ chompin’ amphibian that he is, Frogapotamus Rex sits in sweltering humidity and is doted on by his faithful – either lizard- or frogfolk, or terrified humans who believe him to be a literal incarnation of an angry god who must be appeased with blood sacrifices of captives and virgins to avoid calamity (presumably, he has eaten some of their number in an unplanned fashion, previously). He might wish to eat the party, but he might also be willing to trade with them; the nearby ruins are full of orcs or some other delicious creatures and treasures, and if the party feels up to the task he would be willing to trade orc captives for clues as to the treasures and dangers of the temple.

Hopefully one or the other – or both – will make their way into your swamps and marshes! If you like the big frog-hippo, or if you like other big hippo-frog, let me know! I am easily found, posting way too much, on Twitter. Over there, I am @dungeonspossums and I hope to see more role-playing types hanging out with all of us.

Thanks to incredibly fast work from Jared and @daishugars, the full Quickstart for Roseville Beach (Moonlight on Roseville Beach: A Visitor's Guide to Cruisin!) is now live.
https://r-rook.click/Roseville-Quickstart

http://www.okumarts.com/
Did you know there is a character class created by the great David Okum in Black Pudding 7? NOW YOU KNOW.
@okumarts
https://www.drivethrurpg.com/product/406243/Black-Pudding-7

This spiralling river cave is home to a small dragon cult and a foul muddy wyrm of immense length and lightning breath...

This is in #dnd and there was a time I played a Ranger who had one as a mount.

The Irish elk was a colossal deer that stood at 2 metres tall & had an amazing set of antlers that spanned 3.6 metres!

Players are always surprised that they're not dead when they hit 0hp in my games. Aren't I one of those 'killer GMs' people are always talking about?

And it's true, I do enjoy keeping the specter of death ever lurking nearby in my player's thoughts...(blog link in next tweet)