or, You Thought You Could Escape Broodmother Skyfortress?! 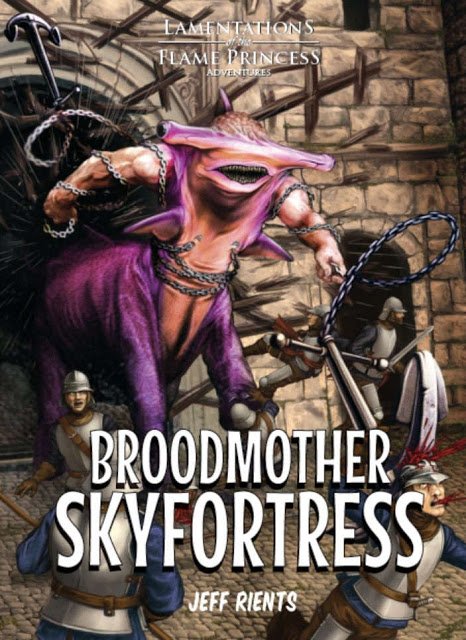 So you thought I was done writing about Broodmother Skyfortress. You fool. You perfect, beautiful rube! Broodmother Skyfortress is one of the foundational pillars of this blog – we’ll never be free of it! I’ll be writing about this book until Google deletes Blogger (he said, knocking on wood). Today I have a special article to present: the iterative development of the maps of Broodmother Skyfortress!
How did all this come about? Well, quite awhile back, after my review and interviews of the book, I emailed Jeff Rients for some advice on nerd stuff. Once the matter at hand was dealt with, he asked if I’d still be interested in seeing his draft map for Broodmother Skyfortress. He thought I’d get a kick out of seeing an image he had delightfully titled “nonmap1.jpg.” He was very, very right! I’ve appended it below in all its glory: 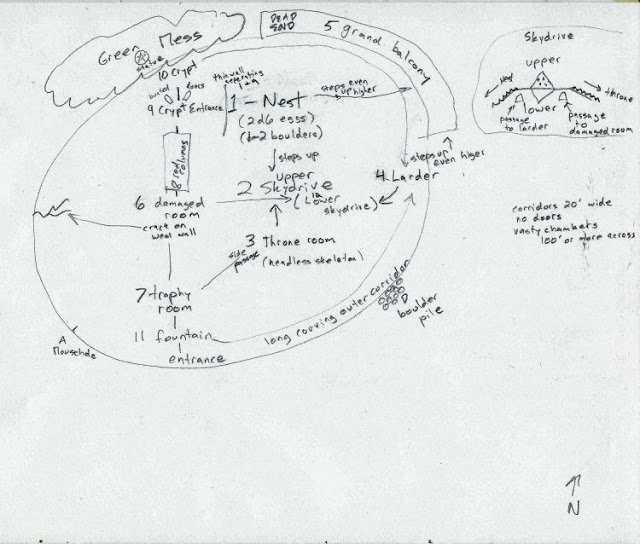 “nonmap1.jpg” by Jeff Rients
He wryly noted that Jez had clearly touched it up a bit by the time it went to print. What a joker.
I immediately asked if he planned to ever write about this little tidbit of Broodmother Skyfortress history on his venerable blog and he told me to have a field day with it. I immediately planned an article to post here on my website, because none of you will ever escape Broodmother Skyfortress on this blog so long as I have anything to say about it.
This led me to reach out to Jez Gordon, the multitalented cartographer on this project, whose outstanding work has been covered by this blog several times (and will continue to be so long as he makes books, because damn if his books aren’t consistently excellent). Having interviewed him already, I felt at ease with Jez, and I was comfortable making aggressive demands of a skilled artist and author who owes me nothing. I said, “Hey, Jez, is there any chance you have any of the iterative designs or discussions between this Jeff Rients doodle and your gorgeous final pieces?” And Jez said, “Totally. Give me a day or two to look for them.”
And then I promptly went on an extended, unplanned hiatus, during which period I did not blog or tweet or email or anything, and I left Jez in the cold.
Fast forward a bit several months and I’ve reappeared and have continuously had the internet directly in my veins ever since. One day I remembered this little plan and so I shouted at Jez (as if he didn’t have anything better to do with his time) and he jumped up and collected all sorts of wild-ass material for me. What a superstar!
And that brings us here. Today we get to look at some wild artifacts of geekdom! Let’s dig in.
First, let’s start at the beginning. Along with Jeff’s version of “nonmap1.jpg” above, we have Jez’s copy: 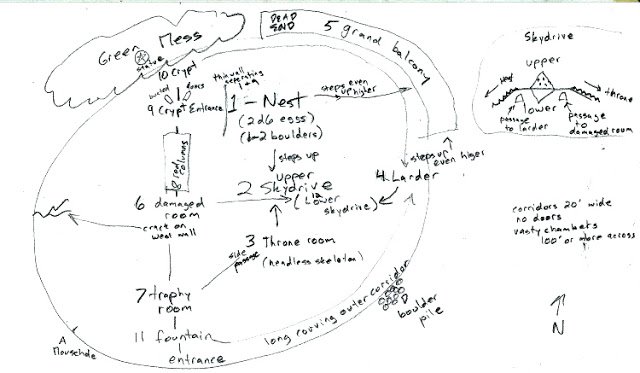 “nonmap1.jpg” by Jeff Rients, altered (I believe?) by Jez Gordon
Once it has been cleaned up, color corrected, and resized, it’s very easy to see how Broodmother Skyfortress began, in many ways, in the fashion of a pointcrawl much more than a traditionally-mapped dungeon crawl.
Jez also provided “nonmap2.jpg”, another Rientsian masterpiece of a sketch; this focuses on the cloud mass that accompanies the Skyfortress through the great blue yonder. Of key interest? “Yo, a cloud half a mile across,” belongs in the Hall of Fame of gaming quotes. That’s how a book got made, y’all. Jeff pitched this shit to Jim and co. with the words “Yo, a cloud half a mile across” and it worked. Let that be a great lesson to everyone out there afraid to make or pitch their ideas – if your ideas are this good, they speak for themselves, and even the artistic geniuses hired to work with you will get the idea. Behold: 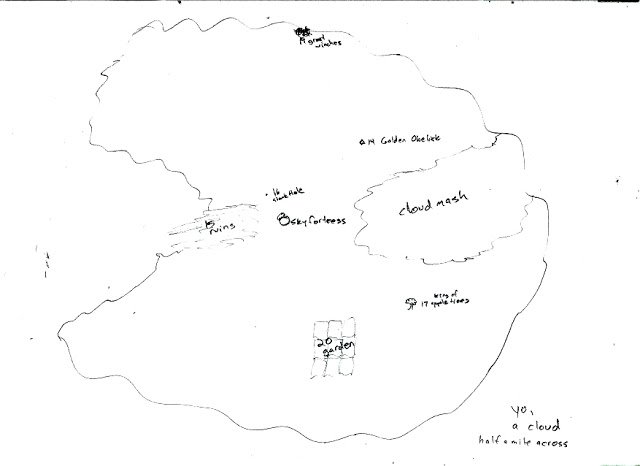 “nonmap2.jpg” by Jeff Rients
But wait – there’s more! Jez also had another of Jeff’s original doodles, titled (you guessed it) “nonmap3.jpg”. This is Jeff’s drawing of the Tunnels Below, the underbelly of the Skyfortress:

This is particularly interesting as we can see how dramatically this changed as well – from a long, horizontal layout to a rounder layout more consistent with the Skyfortress itself! Many of these points, including G (The Pool, page 82) and H (Below the Ruins, page 82) changed position dramatically in the final version.

Jez was not done, though. He also gave me his crystal clear draft copy of the map of the Skyfortress itself, which condenses Jeff’s point-by-point orb, above, into something much closer to the very interesting, somewhat intricate design we got in the book. Below: 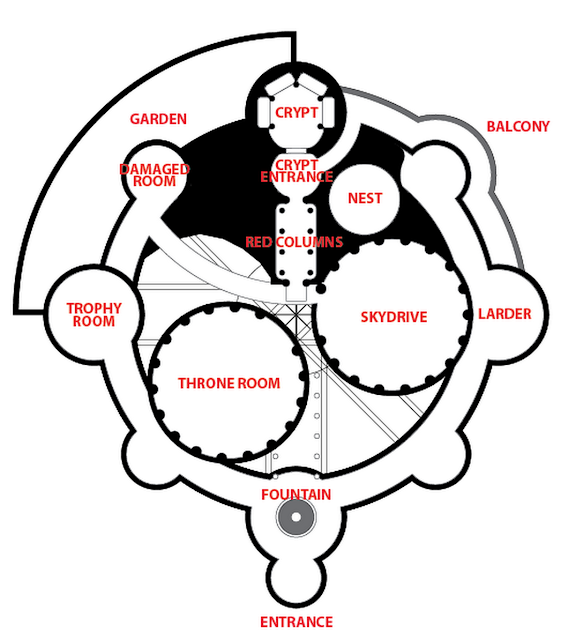 Draft of the Skyfortress, by Jez Gordon

This is quite close to the design we ended up with. What we received in the final book adds a layer of lovely architecture to it, as well as more pathways to transit from place to place. It also added welcome complexity compared to this draft version, increasingly the interactivity of the site. This is one of the most interesting lessons to get to extract backwards from these elements, I think. It’s cool to see all of the changes in general, but it’s especially cool to see the big changes – more paths and more complicated paths, and the removal of the “technical drawing” elements in favor of the gorgeous artistry we got.

From that layout, though, the iterative process can be seen very clearly in this drawing from Jez: 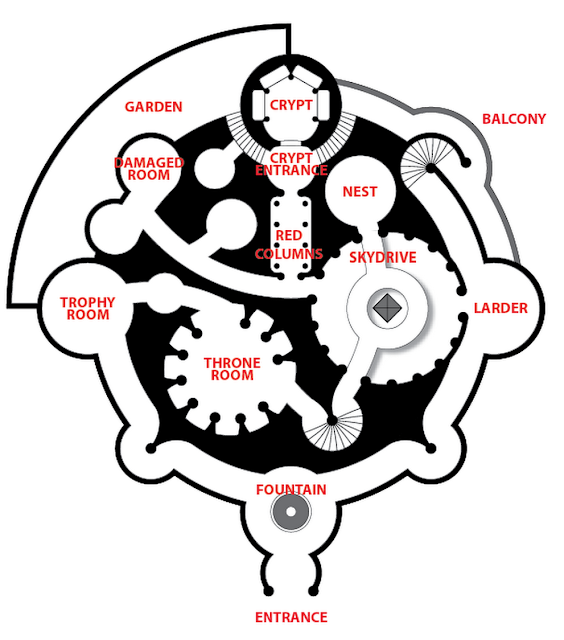 Later draft of the Skyfortress; final version, by Jez Gordon

The entrance is opened up, the curled staircases and architectural interests can be seen clearly here. This is the final draft art that resulted in the map we got in the book! Jez tells me that the iteration that led to this version (which, in the end, became the final version) was the result of collaboration between him and Jeff to nail down where bits and pieces of the Underbelly tunnels connect to the Skyfortress topside; you can see in the book where those pieces connect in the final artwork that would not be present or would not work as well in the original draft I posted above. Additionally, this is the stage of development, Jeff and Jez collaborated to make elements more interactive still; ruined stairs adding elements of danger and interest.

That’s the kind of stuff that only comes up through iteration, new eyes, teamwork, and openness to collaboration!

But wait! Jez had an “almost was” screenshot, as well: 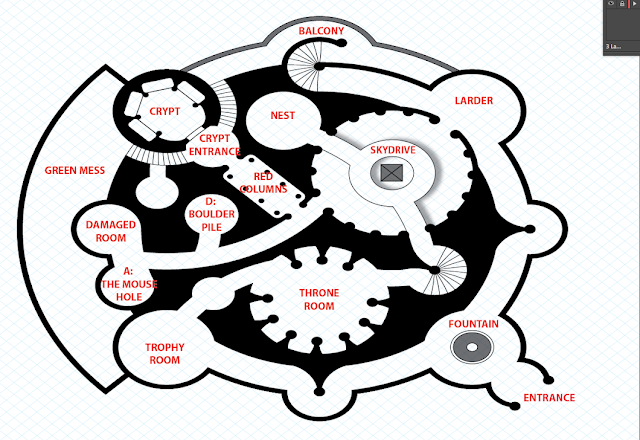 Isometric work-in-progress mockup of the Skyfortress, by Jez Gordon

This WIP image shows the above artwork skewed to match an isometric grid, as there was at some point a discussion between Jeff, Jim, and Jez (say that three times fast?) about going with a full isometric Skyfortress map to match the isometric cloud map. This was not what we got.

Speaking of the cloud map, Jez also had what I consider one of the coolest things I’ve seen in the weird world of RPG development: his traditional media draft art for the half-mile-wide cloud structure on isometric graph paper! 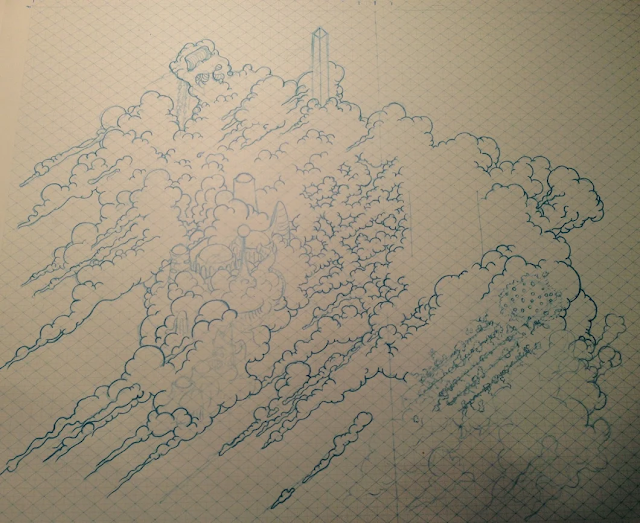 Draft of the cloud accompanying the Skyfortress, by Jez Gordon

This is cool as hell. Not only can we see the design language present in the final copy already present here, but it’s amazing how intricate and fluffy the clouds were, how much more complex and involved the ruins were, and how he has not yet (at this point) put in the Skyfortress itself. Perhaps it was still being pinned down while he drew this? I don’t know exactly the timeline/circumstances of that bit. You can see where Jez blocked out space for it, though. Much of this map made it into the final, painted map – though the ruins were simplified and the clouds of course were rendered with a much lighter hand in the painted version.

And here are the slightly redacted versions we get in Broodmother Skyfortress, so we don’t give away the whole cow while we show off Jez’s work: 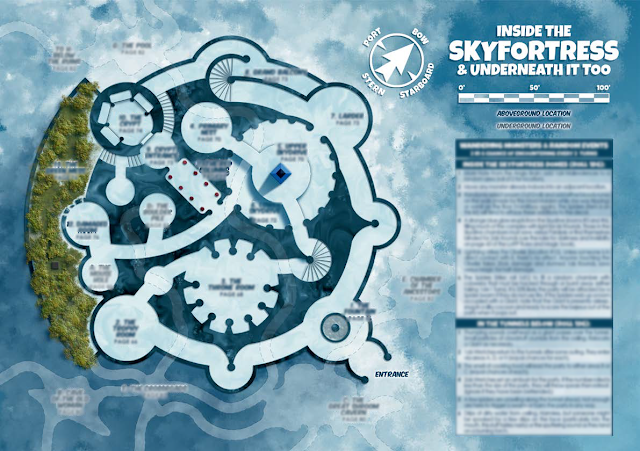 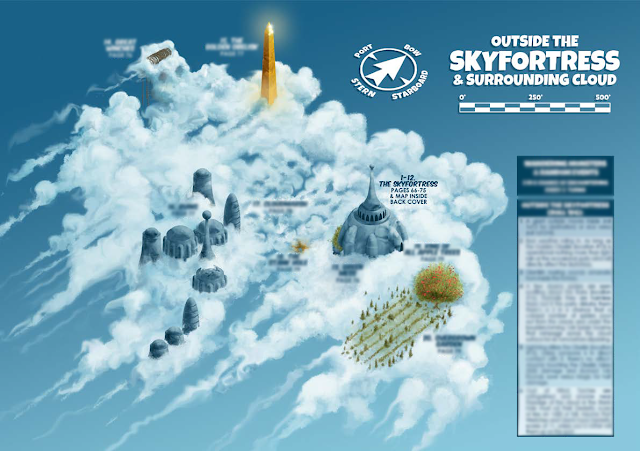 Final book versions of the maps, by Jez Gordon

Just tremendous maps from Jez. Not a lot of books have this combination of clarity and artistic value – to say nothing of the super cool layered system of semi-transparent underbelly maps beneath the main Skyfortress map. Terrific stuff.

It’s really dorky, but I genuinely had a giant grin on my face going through these design documents and seeing the collaboration take shape. I hope you had as much fun reading this as I had writing it! The maps Jez put together for Broodmother Skyfortress deserve as much praise today as ever. The layered map “Inside the Skyfortress & Underneath It Too” is brilliant. The faded underbelly chambers printed beneath the crisp Skyfortress is brilliant, and the colors of the whole matter, including the sky background, is gorgeous. It is bright, clear as day, and useful – and hard to forget!

Big thanks to Jeff Rients for fearlessly presenting me with “nonmap1.jpg” and his blessings to undertake this whole thing in the first place, and an even bigger thanks to Jez Gordon for his tireless willingness to dig through old hard drives and business communiques for work-in-progress art and details so I could do this. Seriously, what a great sport. Thank you, Jez – this would not have been remotely possible without you.

4 comments on “The Maps of Broodmother Skyfortress”