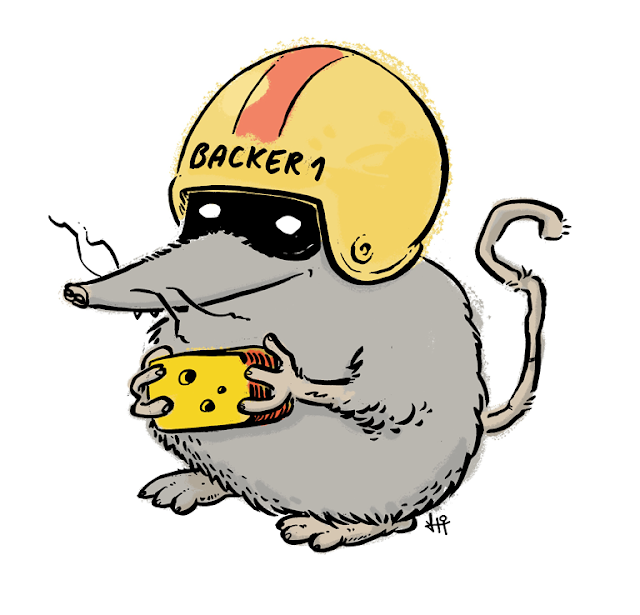 by the lovely Luka Rejec, who retains the copyright to the artwork (you savage heathens) and whose cruel name echoes in the mouths of a thousand grinning corpses in the endless expanse of the Rainbow Lands.
Some days ago, when he returned from his vacation to find the stretch goals for the Ultraviolet Grasslands Kickstarter totally demolished, Luka and I were laughing in the WTF Studios Patreon Discord server that I should get a dashing cape or some kind of hat or eyepatch as Backer #1 of the UVG (which is my sole and singular claim to fame on this earth). The triumphant joke was that I needed a Backer 1 helmet to match that of Racer X from Speed Racer.
And then I woke up this morning, several days later, and Luka had drawn this incredible Backer 1 possum overnight.
I do not know what I could possibly do to thank this strange, creative wunderkind enough, so my tiny gesture is to immortalize it on this blog and change my social media icons to this terrific possum. Thank you very much, Luka! This made my whole week.
Another way for me to thank Luka would be to point you to his stuff:
Patreon – I wrote about this last August and I’ll probably do so again this summer, but the long and short of it is that there may not be a better value for your dollar in this entire hobby. We pay only when he makes something; he makes something pretty much every month. A chapter of one book here, a chapter of another book there. This is how UVG and Witchburner got made. Then we get the PDF for free when he finishes it, long before it goes public. We get to give feedback and direction for projects, and vote on various little things. We get access to the kindest, chillest, best Discord around. We get jokes about entropy. He throws out invaluable advice on Discord on everything from how to draw trees on maps to what kinds of rodents to eat (this is not a joke). I feel very strongly about supporting creators even for a $1 a month when I can, and Luka’s Patreon is set up to where I still feel like I’m robbing him even at the highest backer tier. It’s a great deal.
Ultraviolet Grasslands – This is my all-time favorite setting. It just speaks to me on a primal lizard-brain kind of level. It’s the summation of all the influences that dictated my tastes in fantasy. I’ve said it before: it’s like my brain always had some soupy, indistinct version of this banging around, unable to give it shape, and then along comes Luka on the opposite side of the planet from me making the exact thing I’ve always wanted. He makes it look easy, too. It’s amazing. Heavy Metal magazine. Moebius. Blue Oyster Cult. Psychedelia and hallucinogens. Spacefaring cars set to Don Felder soundtracks. The ruins of the old, old world so distant in memory that none of it makes any earthly sense anymore. Neon signs. Extradimensional strangeness. The Kickstarter went live a few days ago and runs until April. It’s already smashed every stretch goal; for those of us on the highest tier of rewards, there’s a set of eye-searing UVG custom dice, a Luka-illustrated UVG GM screen, and a 4.5-foot-long accordion-fold map of the setting (besides the fancy hardcover book). They’re literally having to find new things to give us that won’t extend the timeline at all. I cannot overstate my hype for this. Your money belongs here if any of those things sound cool to you. Free starter PDF here.

WizardThiefFighter – The WTF in WTF Studios is WizardThiefFighter. Luka maintains that Clerics are just confused Wizards with pretensions. One day, as a lifelong cleric player (when the dice go my way), I will undoubtedly duel him with pistols at dawn over that slight. Until then, though he also has a terrific blog where he writes about art, making books, the industry, his ideas, and big announcements. You should read it. It always has pretty pictures, too, if that’s your thing.

Books That Pay His Bills – Luka’s drawn for a ton of books, but some of them actually directly support him. I can’t say this is a comprehensive, certain list, but I can say that some of these probably put money in his pockets so he can continue to eat bugs in exotic locales (again, not a joke).
Witchburner
Misty Isles of the Eld
What Ho, Frog Demons

To be clear: Luka had no idea I’d post this or any of these suggestions to go drop cash on his work. Luka dropped that art in a private message in the middle of the night (my time) and probably during daylight hours when he should have been doing actual work (his time). He asked for nothing, expected nothing, and certainly did not assume I’d waste everyone’s time with this giant love letter.
Nonetheless, go support Luka if you like his renaissance man caliber of work, appreciate the rocket-trajectory career of an incredibly gifted and hard-working illustrator and author, and want to ensure our hobby has kind, warm-hearted people in it for years to come. He is the kind of person I want a thousand more of in the world (Slovenian creators living in Korea, specifically).
Thanks again, Luka. Here’s to many more future opportunities to support your work. It’s all been fantastic.
So, in the (paraphrased) words of the wonderful Larry Hamilton in all of his podcast outros, “you can find me on various sites where you see my social media avatar by the amazing Luka Rejec!”