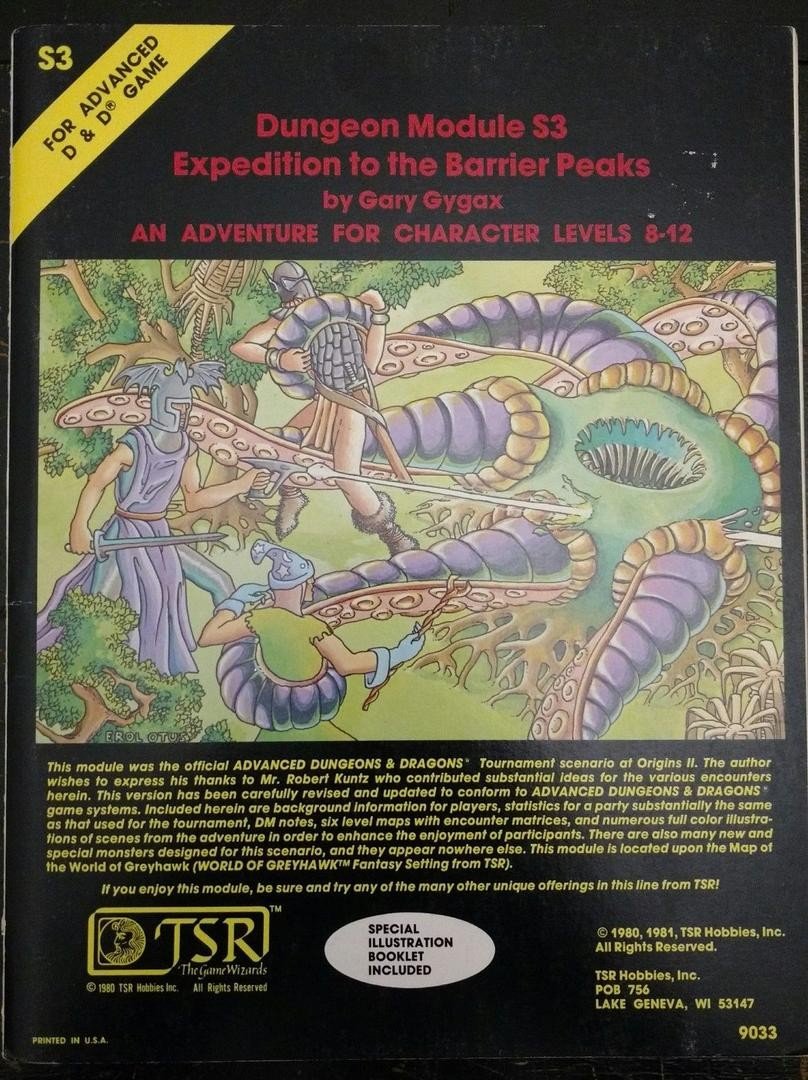 A few days ago I was catching up on podcasts. Jason Hobbs (who hosts Hobbs ‘n’ Friends of the OSR, Hextalk, and Random Screed) was discussing his latest games. In this monologue, he discussed adding halflings to his game setting, having them play the role of nomadic savannah dwellers. He was bandying about having their beasts of burden be ostrich-like creatures, but stopped shy of committing to the idea as he considered it a bit “too gonzo” for him. There’ve been a lot of discussions on the internet attempting to define “gonzo D&D” for newcomers and veteran players alike; often these point to things as universal answers, which is difficult because I think that there’s a lot of variability to what is gonzo at one table versus another table altogether. This gave rise to a question within me: what does “gonzo” mean to you?

For the uninitiated: Gonzo is a term that gets tossed around fairly frequently in OSR discussion. Usually, it indicates content which is zany or bizarre, reveling in unpredictability and curiosity. We borrow this term originally from gonzo journalism, named and popularized by the inimitable Hunter S. Thompson. It was a style of writing noted for eschewing the objectivity of traditional journalism in favor of its distinctive authorial voice and focus on the bizarre and bewildering elements of the underbelly of politics. Some have also used it retroactively to refer to some of the stranger “kitchen sink” pulps, a genre of book which undoubtedly influenced the imaginations of many creators in our hobby, new and old alike. Those gonzo pulps eventually evolved into the bizarro fiction movement of new absurdism in literature, where authors combined elements of shock humor, horror, satire, surrealism, and pop culture to create some seriously bizarre and often funny works.

In D&D, we can broadly say that the gonzo and the bizarro are those things which are incongruous with the setting and tone or theme we are trying to evoke. But because of the variability of expectations between groups of D&D players, I think it is very hard to pin down what is and isn’t gonzo in tabletop gaming with any objectivity. It falls into a Potter Stewart situation where I know it when I see it, and I think all of us have different standards based on our tastes and our settings/games.

For example, Jeff Rients wrote Broodmother Skyfortress, an adventure in which a tremendous, mobile, mechanical castle in the sky (built by your choice of angels, gods, Galactus, titans, or “other”) terrorizes the populace below by flying to and fro, deploying massive cables, and allowing rampaging giants to swing on down and raid villages of their wealth and food. The giants are, canonically, sort of like centaurs – except the base is an elephant and the top half is a shark-man. The advanced cloud-piercing structure they call home is also peopled by devolved servitor wretches in the underbelly tunnels of the place. I’d call this gonzo. That’s just my opinion, though – and my opinion is stemming from the fact that I am playing Dungeons & Dragons instead of Gamma World, where I think Broodmother Skyfortress would go from “campaign-derailing gonzo hilarity” to “just another Tuesday.”

Another example is something like S3 – Expedition to the Barrier Peaks. In this, the player characters will venture to a downed spaceship and recover science-fiction weaponry and computerized RFID access cards and things of this nature while fighting space aliens and robots. This is gonzo, to me, because of the tenets of the D&D games I play. If you’d told me the adventure takes place at a mad wizard’s menagerie full of weird experimental aberrations and it had scrolls of access or glowing crystals for certain doors and was guarded by wind-up automata, I probably wouldn’t. The premise is the same, but the trappings are more relatable to a game of dwarven louts and heroic swordsmen and archers, so I would not even blink.

So, circling back: Jason Hobbs thought halflings riding ostriches might be a little too gonzo for his world. In many of the games I play, in settings I’ve Frankensteined into being, it is not unlikely for the party to meet a caravan pulled by six-legged lizards, or to find a city on the back of a turtle-like creature slowly swimming around the sea, or to meet a knight on a gryphon. It may not be constant, but it is not outlandish. To me, these are just the trappings of fantasy, where there is a world of wonders all around. In Jason’s game, halflings on ostriches are an alien concept in his world, so he is understandably hesitant to jump right into that idea with both feet. Gonzo can be an evasive, subjective concept to us in the OSR.

Both he and I would probably not want to take our settings and have a hex where the players could stumble upon a lair complex that turned out to be an ancient nuclear missile silo run by a marauding computer named C.Le.R.I.C; while that’s an awesome idea, it would be completely out to fucking lunch, equally, to both of us. The difference between Jason’s “gonzo” and my “gonzo” are very different, but somewhere along the line, they would probably meet up. Just where that point of convergence would require a survey of some kind. Which leads me to asking everyone for a little help.

Question for the Reader:

I’d like post an important question to you folks. It would mean a lot if you could drop me a line somewhere and let me know your thoughts. Comment below, ideally, if you can!