I’m no cartographer, that’s for damn sure!

Awhile back on Luka Rejec’s Patreon Discord (the Stratometaship!), a lovely fellow by the name of DanF posted a Reddit link in chat, asking for opinions on his newest idea: One-Page Settings. How could I pass up such an idea? I opened the Reddit thread and was immediately taken with the concept of small setting documents outlining the big hits of an area in a manner akin to the One-Page Dungeons we’ve all come to love.

I asked DanF if he’d be okay with me taking a stab or two at the idea. He was kind enough to give his blessing, and I stewed on it for several days. I don’t know why it stuck with me, but I really couldn’t get it out of my head. I think it’s just a really clever idea, and I have a lot of different angles to try out for it. I have my plate a little full at the moment between work and family and the Kickstarter, but since I am not supposed to be working on the Kickstarter yet (ha!) I figured I could squeeze some time in to try my hand at a One-Page Setting. The way I figure it, it’s good practice for messing with layout/publishing software (as you’ll be able to tell, I need the practice!) and a chance to play with this idea before it drives me nuts.

Anyway, turn on this playlist and dig in because I made one of these One-Page Setting things as a fun exercise and I figured maybe other people would want to take a look.

The setting I concocted is called The Savage Tundra of the Winter King. It’s a vast, inhospitable tundra, sort of like a mix of Baffin Island and the interior Canadian Arctic tundra ecosystem. The Tundra of The Winter King is sort of an informal, add-your-own-ingredients pointcrawl framework. Here, dangerous creatures roam the expansive wilderness and the ruins of an ancient, once-great dwarven civilization dot the landscape. The dwarves are believed to have gone extinct in some ancient cataclysm, but are in fact simply trapped underground in their greatest city, locked in an eternal war with their duergar cousins. The duegar seek to revive their once and former master, the Winter King, who lay at the center of their subterranean caverns in torpor. Several different cultures dot the coasts, from the Norse-inspired to the Inuit-inspired to some seafaring not-Britons. The Canada is strong in this one.

Included on a single page are:

The text will reveal several factions, a couple bad guys, a few relationships, and so forth. You should be able to piece together a campaign that goes edge to edge and crawl your way through villages, the icy seas, ancient dwarven ruins, duergar tunnels, cult temples, and more.

You are encouraged to bring along some adventures/dungeons/maps by Michael Prescott, Dyson Logos, or whoever else floats your boat. You will also want a source of NPCs to fill your cities and villages. A few villages/sites are left intentionally undefined so you can plug in whatever you like and leave an air of mystery. The included map has blank spaces in several spots to make it easy to add even more sites to your version of the tundra. 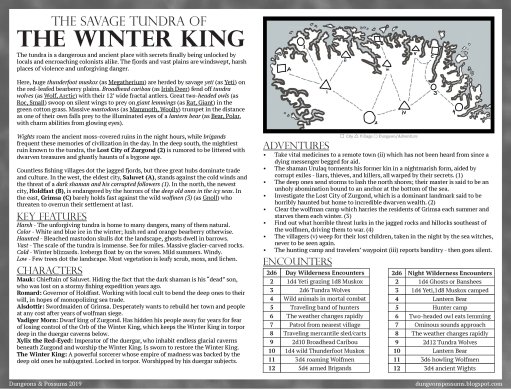 I’ve made this a single-page 300dpi PDF suitable for print. It comes in under 1MB. It is dual column so that it can be folded in half like a little book – it annoyed me to leave the reverse blank, and I could have put tons of useful info there in the vein of @barbariankb‘s mini-zines (which are the basis of our Kickstarter!), but it’d sorta be cheating at the format rules of the One-Page Dungeons if I did that for this One-Page Setting, since the One-Page Dungeons demand that all content fit on one side. You can use the blank space for notes, or something; it’s a free country.

This is available now on my DM Aids & Misc page under Downloads on the sidebar. You can also go directly there by clicking the link below:

Go to the Downloads!

I hope you like this little experiment. Credit again goes to DanF for coming up with the idea of One-Page Settings; I merely ran with his idea. If this interests anyone, I may do more in the future as inspiration takes me; I have a couple different layout ideas I’d like to test for this sort of thing to see what works best. Either way, though, let me know what you think about this whole idea, and be sure to show me if you make your own! You can hit me up in the comments, by email, or of course over on Twitter @dungeonspossums.

7 comments on “One-Page Setting: The Savage Tundra of the Winter King”