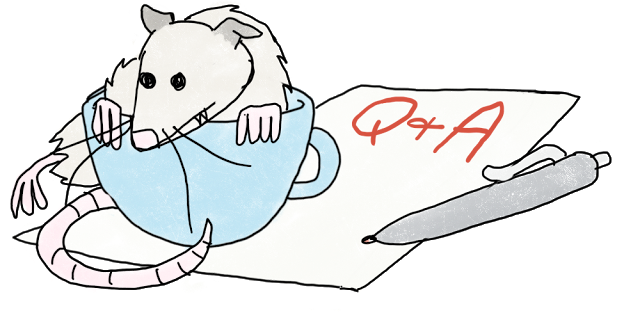 As part of the ongoing back-to-back Hill Cantons reviews, I have managed to convince another wonderful member of Hydra Cooperative to spend their time answer nerdy questions from a dude who pretends to be a possum on Twitter. This time, I tricked Trey Causey into sitting down and answering a bunch of questions about his time with Hydra Cooperative, his own publishing imprint, blogging, and basically everything else in his life. He was a total sport about it all, though, and humored me. Here’s what he had to say while he nodded and tried to remain calm while Animal Control arrived with one of those KetchAll animal poles to drag me out of his home:

Thanks very much for giving us some of your time today! I like to make sure I get a sort of background question in these Q&As somewhere, so, to start off: How did you get your start in role-playing games, what has your path through the hobby been like, and what got you into the professional side of things?

Soon after I started writing my blog (From the Sorcerer’s Skull), I had the idea that would become Weird Adventures. Since it was an atypical fantasy setting, I was interested in seeing if by blogging about it I could gain an audience for publication. I had some success doing that, at least enough for me, and Weird Adventures was published in 2011 under Armchair Planet, which was the entity a frequent collaborator and I had used on some comic book projects.

You’re a part of Hydra Collective, and your name appears in nearly everything you guys put out. You seem to lurk behind-the-scenes in many ways as an editor, and yet folks like Chris Kutalik credit you with a lot! What is your role like – what do you think your strongest contributions have been, where you’ve really made your mark?

Ha! I wish I couple claim to be some sort of secret Hydra mastermind. The truth is, I’ve helped out here and there with several projects, but mostly, I feel like I’ve made my mark in the publication of my own books: Weird Adventures, the Strange Stars books, Mortzengersturm, and the Azurth Digest. Beyond my own stuff, I’ve mostly done graphic design of advertisements, Hydra Catalog, and a number of things for the Operation Unfathomable Kickstarter.

You also do plenty of design and color work with your collaborators at Hydra Cooperative, including the doing layout and graphic design for the What Ho, Frog Demons! cover. All of the Hill Cantons books have very different covers which each do a good job of evoking a sense of the book in some way; Slumbering Ursine Dunes has a sense of scale and desolation, Fever-Dreaming Marlinko makes you think of a buzzing city filled with colorful characters, and Misty Isles of the Eld creates a feeling of the alien and unnatural Eld incursion. What were you trying to evince with your design?

Well, I can’t take credit for the earlier Hill Cantons books, other than I was the one who suggested the typeface Marshall for SUD, and that has become the Hill Cantons standard. I do agree with your assessment of them, though. If it had been up to me, I would have probably made them a bit more different, with different typography and logos for each. Maybe if there are every second editions I can sell Chris on that! On What Ho, before Luka came on board, I had suggested a kind of German Expressionist movie poster style for the cover. I got distracted by other stuff, but then as Luka started turning in wonderful art, I remembered and mocked up a design. Chris liked it, as did the community in general, so we went with that. A lot of people say it has a Ralph Steadman style, which it definitely does in final form, though that was not the original concept. Luka laid out the final version on the cover, but I think he only change he made was to replace the older “rough draft” Hydra logo I had used with the official one.

How did you come to be a part of Hydra Cooperative? What attracted you to that group of creators?

I knew Chris as a fellow blogger at least from late 2010. The other guys I had met in my brief time in Chris’s Google Plus Hill Cantons game. Chris had tried to spearhead several rpg creator co-ops before Hydra, and I had always been involved in those early discussions, but was wary of the size of the previous endeavors. None of those worked out, but this one did. I had been doing my own stuff with Armchair Planet, but I asked the guys if I could join, and they assured me they had been thinking about inviting me all along to soothe my ego. We eventually moved my publications under the Hydra umbrella. Strange Stars Fate was the first book I published that was branded as Hydra.

You run a popular blog, From The Sorcerer’s Skull, which is all over the map in terms of content. It is consistently fascinating, but never dwells on one subject too concertedly. It seems like you have greatly varied interests and influences. What do you think your biggest inspirations are, and how does this broad spectrum of content impact your gaming?

In years past, I was perhaps a bit more focused with long stretches of Weird Adventures and Strange Stars posts, but it has always wandered around, it’s true. In some ways, I envy creators with a narrow set of preferences for gaming and are able to go to that well again and again. I envy them, but I don’t really understand them. I think the blog gives me an outlet for all these ideas I get so that I’m not constantly trying to get my players to shift to something different. I do sometimes wish I had more time to pursue some of the ideas in actual games, though. Comic books are one of my big inspirations. I am also a fan of pulp fiction of various sorts, and all the usual fantasy writers that influence the OSR crowd. Beyond that, it’s real world stuff: history and science.

Another game company you are a pretty important part of is Armchair Planet, your own publishing imprint. For those who may not know, can you summarize Armchair Planet and its products?

Armchair Planet is my imprint within Hydra, formerly my solo publishing brand. My first product was Weird Adventures, which is a fantasy setting with a society and level of technology reminiscent of America in the 1930s, rather than the usual Medieval/early modern analogs. Technically, it wasn’t my first, because it was preceded by a freebie sort of teaser called Strange Trails. My second product was a transhuman space opera setting with a bit of a retro-70s sci-fi aesthetic called Strange Stars. It has a system agnostic setting book and two game books, one compatible with Fate and one with Stars Without Number. My latest projects have been set in the Land of Azurth, which is a bit Oz, a bit Adventure Time! and a bit of a lot of other stuff. The first publication there was an adventure called Mortzengersturm, the Mad Manticore of the Prismatic Peak for 5th edition D&D. I’ve also put out the first issue of a full color zine-sized thing called The Azurth Digest. All of these have been reviewed on the internet, so you don’t have to listen to me tell you how good they are!

You’ve worked as a game designer and writer on your own books with Armchair Planet, and many people in the hobby value your input and creations. What’s next for you with your name front and center on the cover? What projects do you have in the works?

I’m working on a superhero thing right now called the Armchair Planet Who’s Who. I hope that will be out this year. I also have another issue of the Azurth Digest in the work.

I always like to end off with a chance for creators to share what they’re excited about. Now’s a good time to plug anything your heart desires. Whatever you’re working on, just finished, planning to buy from someone else – anything at all. What do you want to spotlight?

I am excited to see Odious Uplands from Jason Sholtis. Everything he does is good. I also may do cover design on that one. We’ll see.

That’s what’s up! Trey on the design ethos of the WHFD cover was especially great to learn about – that’s some fascinating comparison. I’m ashamed to admit I had to Google Ralph Steadman but I was ecstatic to learn of his art. Absolutely wicked stuff! I can see the comparison, though I think WHFD looks a little more restrained and grounded. It’s also always good to see Odious Uplands mentioned because, like Beetlejuice, if we all say it enough, it will appear!

I can’t thank Trey enough for spending his weekend answering emails from me. Trey, if you happen to read this, thank you so much for your kindness! It was a pleasure to speak with you and I cannot wait to do it again after your next release. You’re awesome.