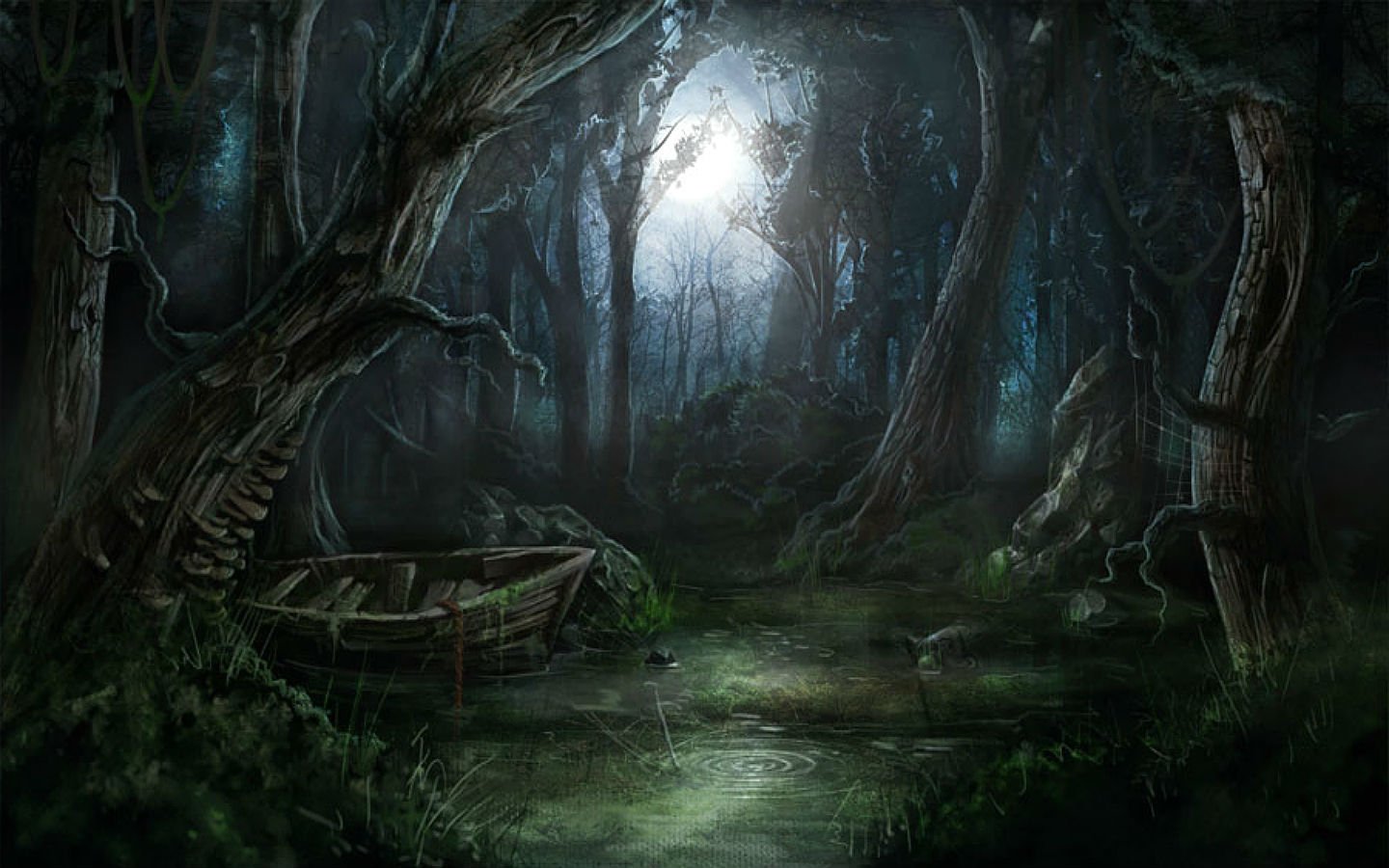 Supposedly from a game called Bitefight, but I can’t verify that. If you know the artist of this image, please tell me so I can credit them!

Fearful whispers from the cracked lips of refugees from the borderlands tell of crops putrefying in the fields overnight, of misshapen animals limping into town only to collapse and spread the filth and foul disease. They croak out with dying breaths that in the midst of torrential monsoons out of season and inexplicable plagues upon their livestock, they glimpsed dark figures betwixt the trees beyond their barren fields, their shapes concealed by the buzzing swarms of countless insects. One by one, small settlements at the edges of man’s reach blink out of existence, leaving only the wide-eyed corpses of those few, sickly, unfortunate folks able to escape far enough to tell their tale before their last trembling breaths.

In the untamed wilderness beyond the settlements of mankind, blights spread through the woods. Trees wither. Birds plummet from the sky, never to sing again. The animals grow frantic and frothy before their emaciated forms melt into the blackened undergrowth. Stepping over the fragile bones of the decaying beasts, men and women shrouded in patchy furs and grime leave a trail of mouldering devastation in their wake. They are the Fraternity of the Festering Wood, and their time is now.

This cult is comprised of people who embrace the state of rot in the cycle of life. They believe death and decay is necessary for rebirth, to cleanse the old and seed the world anew. They employ druidic and necromantic magics in equal measure to accelerate the cycle of life and death, believing that only by doing so can the world avoid even greater calamity.

In their teachings, the world is doomed to horrible anguish – a sort of hell on earth scenario. The gods, they believe, are dying, and behind them stir horrors from beyond reality, older than the gods themselves and held at bay only by the weakening deities. In their beliefs, the only way to restore the gods to their glory is to extinguish the corrupted world and see it reborn from the rot and ashes more fertile and resplendent than ever before. In so doing, the gods will be invigorated by a fresh and renewed world filled with the pious and uncomplicated, and their restored powers will continue holding the great old ones at bay. It is merely a slightly unfortunate side effect that the world must be summarily blighted and stripped bare to achieve this in the eyes of the Fraternity of the Festering Wood. 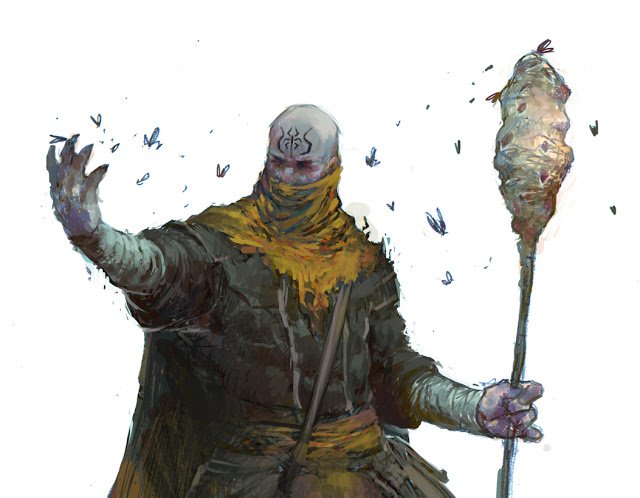 The rank-and-file of the Fraternity of the Festering Wood, cultists are warped devotees of the principles of decay and renewal. They seek to further the goals of the rotpriests they serve, and carry out their will. They are emaciated and pale, draped in rotten animal skins. At dawn and dusk they perform profane rites and bow to the earth with their backs to the sun. In communities unaware of the Fraternity of the Festering Wood, cultists may manage to infiltrate as homeless refugees and sow discord and decay from within, owing to the sympathies and good natures of locals.

Corrupted druids whose faith in nature has been radicalized through fear of the great old beings beyond time and space who threaten to consume the weak gods of the realm and plunge all existence into horror and chaos for eternity. Rotpriests now wield their druidic powers to advance the cycle of life to death and putrefaction, believing that, much as decaying leaves fertilize the forest, only through blight can the world be made anew. The rotpriest is nude, clad only in a mantle of tattered animal furs and grime, and wears on her head a crown of thorns.


*Notes: The Rotpriest has access to the following AD&D 1E spells, and may cast each of them once per day.
1st Level: Entangle, Faerie Fire, Pass Without Trace, Shillelagh
2nd Level: Barkskin, Charm Person or Mammal, Cure Light Wounds
3rd Level: Call Lightning, Plant Growth
4th Level:  Call Woodland Beings
Additionally, the Rotpriest may use a spell-like ability called Blight once every other turn:
Blight – Target an area 10′ in diameter up to 60′ away. Infest all targets (save vs spells to negate) with rot and maladies. Those infested take 2d6 damage as festering boils erupt with vile spores that corrupt and kill plants all around them.

The Blightking is the prophet who has seen the coming of the great old ones and whose message of terror corrupts man and druid alike. His skin is the rotten blue-green of a putrescent corpse, tight on his knotted muscles. Every bone, black vein, and rope of muscle is visible through his lean flesh. He radiates a foul stench unknown to mortal men in this epoch but known to those who huddled, terrified in their caves, eons ago, cowering from sorcerer-kings and their ungodly rituals in the Empire of the Before. His fingernails are long and curled, his toes cracked and bloody. He leaves a trail of rot in his wake; flowers shrivel, shrews and rats run mad with plague, swarms of locusts and lice rattle the dead leaves of wilting trees en masse. His is the voice of undoing, and the horrific buzzing that erupts when he speaks is like the descent of a thousand hornets as he rasps word after word too slowly for the comfort of human ears. His eyes are black, his lips tight against yellow gums. No teeth has he, yet when he snaps closed his jaw the clack is enough to chill the bones of mortals. His back is covered in one thousand and one boils from which wriggle the hissing larvae of crookflies, and hundreds of bloated ticks feed upon his fetid crotch, growing black and thick.


**Notes: The Blightking has access to all 1st-6th Level Druidic spells in the AD&D 1E Player’s Handbook, and can cast 7x 1st lvl, 7x 2nd lvl, 7x 3rd lvl, 5x 4th lvl, 4x 5th lvl, and 2x 6th lvl spells per day from that list.
The Blightking has access to Blight, as above, but does 5d6 of damage to those infested and can target a space of up to 25′ in diameter up to 150′ away (5′ diameter/10′ range/1d6 per 3HD of caster).
***Notes: The Blightking’s lair, if found, contains an H cache in treasure as well as every single treasure on this list – the last remaining artifacts of the druidic coven the Blightking corrupted.

This grotesque cult is a suitable threat of extinction to small towns and areas where the PCs linger. Did your party’s fighter establish a stronghold? Make her fight for it, christen it with blood, and anoint her the slayer of the festering ones. Did your party decide to set up a base in a town because some trading gimmick was more profitable than the nearby dungeon? They’re gonna need that gold to hire enough mercenaries to cleanse the woods with righteous fire. Whatever it is that resembles civilization and traps the PCs attention, it’s about to get really gross, really fast. The Fraternity of the Festering Wood also provides serious problems for parties attempting forest travel in hexcrawls and the like, and could potentially force those parties to deal with them in a forest “dungeon” to proceed without constant encounter table vexation.

As always, hit me up in the comments or on Twitter at @dungeonspossums if you have any thoughts, comments, ideas, or problems with these dudes. I am happy to tinker.