Apropos of nothing, I wanted to write about some Stuff I Like. Ideas, visions, scenes, archetypes, cliches, gimmicks – whatever it is that strikes my fancy and makes me want to play or run Dungeons & Dragons (or any of the other games I like) right this moment. There’s a lot of Stuff I Like, and it’s always nice to focus on the things we like instead of the stuff we don’t, since so much of life is usually involuntarily stuck on the other stuff we like way less. I have no idea if this will be of any interest whatsoever to anyone else in the entire world but I’m gonna write it anyway.

I like vikings. I like the swords of the vikings, especially the latter era with Ulfberht inscribed on the blade and inlaid with a different material to proclaim their origin; they must have been gorgeous new. I like the spears of the vikings, with their leaf-shaped, lugged iron heads. Lovely stuff. I like the utilitarian nature of their bearded axes. I like shieldmaidens with painted round shields, and I like the idea of playing hnefatafl to hand down institutional knowledge and keep critical tactical leadership skills sharp between maritime raids. I am especially fascinated by one of my homeland’s cultural landmarks, the Viking settlement at L’anse Aux Meadows in Newfoundland. There’s a melancholy romance to the saga of Vinland and the concept of trying to make a colony that remote work, that long ago. 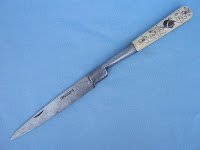 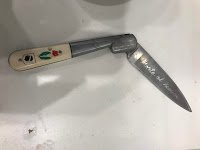 L-R: wejphotos on Flickr, u/tonyinthecountry on Reddit
I like Corsican vendetta knives. They have a slender design, like a barracuda, an inherently predatory shape disguised by the Franco-Italian styling of the decor. I like the smooth bone panels riveted onto the matte steel, the enamel and paint in floral patterns. I like the idea of needing to settle a score so badly, you engrave it onto the razor-sharp blade of the very weapon you plan to settle it with – in theory, anyway! I like their simple ubiquity; a tool carried close to hand at all times for daily needs, but kept sharp and ready, a constant reminder of their true purpose every time you feel the weight in your pocket.
Some vendetta knife hooks/ideas: 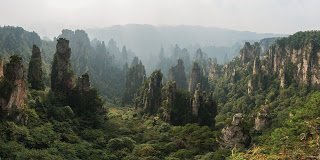 by chensiyuan on Wikimedia Commons
I like Zhangjiajie and its stony needles. I like the dense forest below and atop each peak, like these mountains rise up from a jungle primeval, undiscovered by humans. I come from the mountains and forests of the Cascades and Canadian Rockies; I am accustomed to miles of undisturbed nature and rocky crags amidst the boreal rainforests of the west. But they are not quite so alien in appearance, like this amazing place is to me. The fingers of stone reaching up from the overgrowth makes me imagine fantastic things. I like to imagine the peaks bored out by expert miners, turned into high-rise towers for a civilization of forest-dwellers seeking refuge from endless subtropical rain and the innumerable predators of the deep forests below. I like imagining vine bridges grown from peak to peak, and Ewok-style villages surrounding each rocky outcropping, held aloft by the thick branches of the trees that grow only immediately near the mountains.

L-R: 1612 Austrian halberd on Wikimedia Commons, 1550 Italian halberd on Wikimedia Commons, 1596 Austrian halberd on Wikimedia Commons – all pieces part of the collection of the Metropolitan Museum of Art in NYC.
I like halberds. Oh man, do I like halberds. I like all polearms, really; due in equal parts to various books about knights and castles and medieval warfare as a kid and then Gary Gygax infecting my brain with equipment tables. But of all the polearms, I especially like halberds. In fact, they’re probably my favorite weapon from before the 19th century. Top three, for sure. They’re so practical and multifunctional, like the Swiss Army Knife of just completely wrecking an enemy yeoman on the battlefield. You’ve got an axe with about six feet of leverage behind it; you’ve got a spear (and you can choose between a broad bladed spear for unarmored foes and a long, cruel needle for armored foes); you’ve got a war pick; you’ve got a hook to help that yeoman down off his horse. You can outrange swords and axes, hack at shields and hafts, and you get huge swagger points for looking awesome while you do it. And, their excellence was so appreciated that they became ceremonial weapons when their era as the premiere weapon had come and gone, because they’re just that cool. These decorated examples prove how gorgeous martial objects can be. If I am playing in your game, there’s about a 50/50 chance I’m showing up with a character wielding a halberd.

So, this was just a list of some things I like. I hope some of you found something of use here, or at least liked the pictures (which I sourced via Advanced Google Image Search seeking examples with free use licenses, and hopefully have credited sufficiently here). I think I might do more of these, from time to time, between all the other sorts of things I write about, because it’s nice to focus on the good things. If you liked this, or hated this, let me know in the comments or on Twitter @dungeonspossums so I can adjust my self-worth accordingly.