So I wrote previously about various odds and ends that interest or inspire me because I enjoyed thinking about pleasant things in a world where sometimes we don’t get to dedicate enough time to consciously enjoying things. It seems a lot of people agreed with that sentiment, as I got a lot of very kind feedback from folks who were excited to talk about the little hooks and the shared interests. It also garnered hundreds of hits in an extremely short span of time. Given my own enjoyment and the fact others seemed to come along for the ride, I thought I’d do it again and maybe make a series out of it.

Last time, I came up with hooks or general ideas that were inspired by pondering the stuff I like; this time around I think I’d like to post some treasures/magical items/miscellany that comes to mind as I write about the stuff I like. 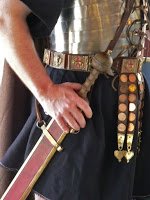 I like ancient Rome. I like the red and gold or red and silver look. I like the way the Legion was equipped; it’s reminiscent of very modern militaries in the way each soldier was outfitted shockingly completely, with an arsenal suited to specialized combat. I like the clear evolution of arms, such as the way the pilum was eventually designed to neutralize shields at range and to be useless to the enemy once thrown. I like the utilitarian design of the gladius. I like the ornate banners announcing the identity of units, and I like the custom breastplates and helmets of wealthy soldiers and generals. I like the dominance of disciplined and professional soldiers aided by reserve auxiliaries.

Some Roman items that come to mind:

Some items inspired by the sword and planet genre:

I like food. I like all food, from all around the world, and was blessed to grow up in an exceedingly multicultural city where foods are celebrated and people visit from thousands of miles away to play food tourist at our restaurants. I like when fantasy offers concrete and tantalizing glimpses at its food, mundane and fantastic alike. I like when L.E. Modesitt describes the simple peasant foods eaten by his characters. I like when you can take a couple of sentences and reverse-engineer a recipe from it. I like when wyvern egg omelettes are casually mentioned in high fantasy, and when the grittiest story mentions a pauper’s musty squirrel stew. I like the way it lends reality and weight to worlds where dragons soar into combat with gryphon riders from halls carved deep into mountains; even if the dwarf king rides against the undead at dawn, tonight his men dine on wheels of sharp cheese and loaves of soft bread with soups full of hearty vegetables just the same as you or I might do.

I like the Atlantis myth. I like the ongoing search by curious parties to locate the real inspiration for the Atlantean empire. I like the pseudoscience of the 1800s and 1900s claiming to know the historical limits of the reach of Atlantis, and its location and details. I like the idea that there was once another great classical age (or pre-classical age, as it were) civilization. I like the utopian vision of ancient authors. I like the variations that describe Atlantis as vastly advanced, or aliens, or water-breathing ocean kings with great submarine cities. I like the idea of these people being involved in the colonization of the world with their seafaring prowess. I like the fantasy of the hubris of their magic or their technology causing their eradication.

Some Atlantean treasures for you:

And that wraps up another installment of some things that I like. There’s so many interesting things out there, it’s just nice to take a minute to appreciate them every once in awhile. Hopefully this article inspires something fantastic to happen behind your DM screen next time you’re at the table or preparing a session. Do any of these already feature in your games? Have your parties left the Flanaess and ended up on Barsoom, or perhaps Atlantis has risen from the deep to terrorize the Picts once more in your AS&SH game? Maybe you just hate when I do this and you want to let me have it. Either way, let me know on Twitter @dungeonspossums or below in the comments.