It’s time again to look at one of the first and most noteworthy of the modern OSR zines, Fight On! Last time we examined this book was for issues 1-4, so it follows of course that this review would cover issues 5-8 in a similar fashion. I ended up rather liking the simple format of the prior short-form reviews of each issue, so I think I’ll keep it up for zines until somebody shows me a better format.

Fight On!, for those of you out there stumbling upon this for the first time, was (is? since #15 is rumored to be on the way at last!) a zine started in 2008 for the growing old school gaming movement, and proved to be the launchpad for a lot of the great minds in our hobby today – great artists, great writers, great designers all got their start here and many of them made big names for themselves. You can find my review of issues #1-4 over here if you’re curious about what came before this batch. 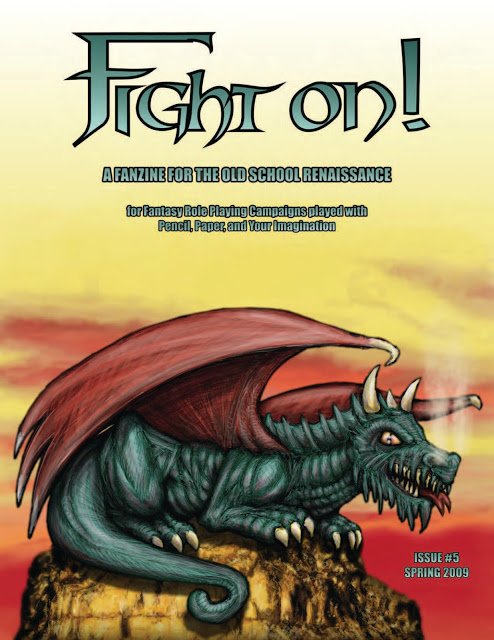 1. ART Lee Barber contributed eight pieces in this issue and they’re all very fun, very distinct pieces. The cat is especially memorable, but the gator and the mounted troglodyte pieces are fantastic drawings worthy of being singled out as well. Paul Fini shows up on page 68 with a really neat image that wouldn’t be out of place in most books produced in the 80s. The late Steve Zieser is also represented here and he did a great job – I purchased the Kickstarter Exclusive version of the  Advanced Labyrinth Lord hardcover with his art on it because I am such a fan of his art. He just truly got the right feeling for his works. As a fun art credit aside, author Jeff Rients gets another rare art shout out in this for cooking up the Erol Otus contest logo.
2. CONTENTS This issue really feels like a zine that has a rhythm going. There’s a few offerings from Jeff Rients and Gabor Lux, who we now know as accomplished content creators besides, and even a guest spot by Tim Kask of TSR fame. 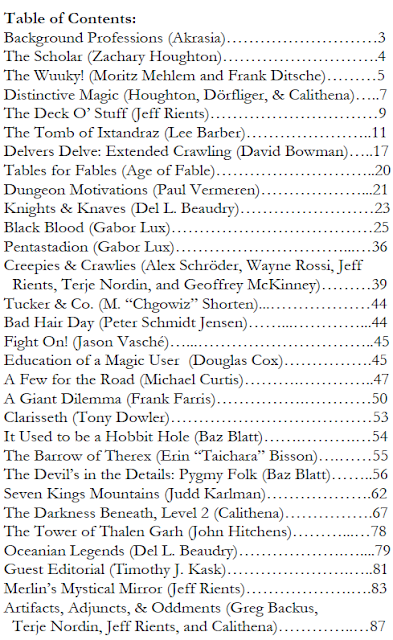 3. STANDOUTS Hands down the winner for my attention in this issue is Lee Barber’s The Tomb of Ixtandraz on pp. 11-17. It’s a classic D&D adventure through and through, with his accompanying artwork lending a really great aesthetic to the entire work. This contest winner was selected from amongst a number of submissions, judged by folks like James Ward and Frank Mentzer. It’s a seven-page adventure to seek the rumored treasures of a lost mage from the ruins of his once-impressive complex for 4th-6th level characters from the clutches of golems, constructs, the undead, traps galore, and more. It really feels like it could have been featured in an issue of Dungeon magazine and was the biggest attention grabber in this issue, hands down.
4. OVERALL Coming in just under 90 pages, this issue is a good size and has a steady stream of interesting, playable content throughout the book – but it’s not the best issue in the series. 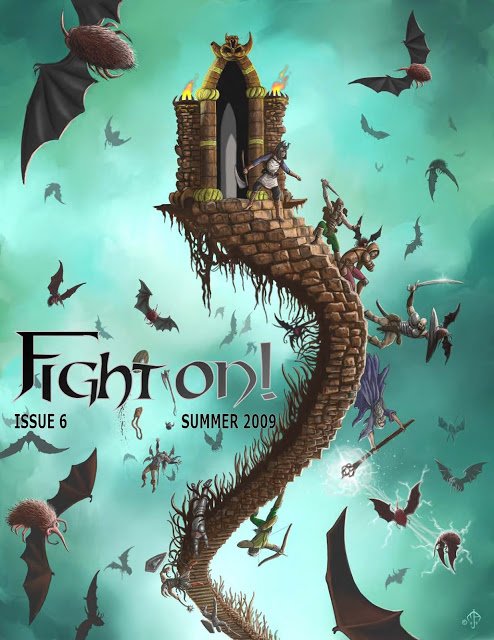 1. ART This issue opens with a fantastic cover. It captures bizarre, alien magics well and makes stirges (I think?) a menacing, harrying force to be reckoned with for the intrepid explorers. It’s not quite old school, but it’s really cool. Steve Zieser is again a contributor in this issue, bringing to life a great hobgoblin right off the bat on p. 3 and a kobold on p. 17, both of which are really exemplary old school pieces. Lee Barber is back; last issue was my first introduction to his work. Love the style of art that Lee put into Fight On! and I would love to see more of it.
2. CONTENTS Fight On! #6 is another one of the larger issues, with plenty of content. We have a few pieces by Lee Gold, to whom the issue is dedicated, as well as an interview with same as written by Maliszewski and Grohe. Gabor Lux and Jeffrey Talanian appear within, as do Tim Kask and Jeff Rients. This is a really content-rich issue, with a really good breadth of topics. 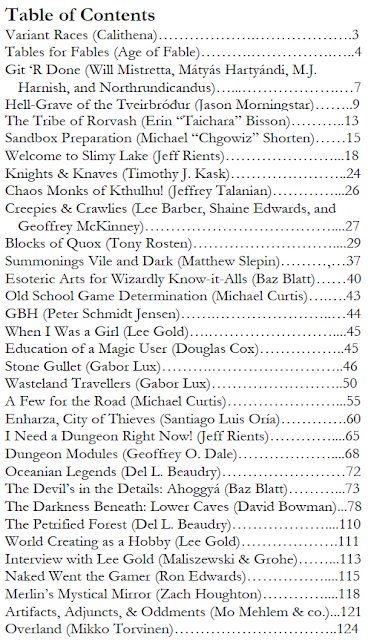 3. STANDOUTS The dungeon adventure on p. 9, by Jason Morningstar, out-Skyrims Skyrim and came earlier to boot. Gabor Lux has an article about Wasteland Travellers on p. 50 which is easily enough on its own to inspire a heroic fantasy sort of game entirely or tons of encounters for an existing game; very playable material right out of the book. It’s followed up by an article by Michael J. Curtis titled A Few for the Road on p. 55 and combined the two really are a whole bunch of adventure; I can picture playing it in 1E or 2E clear as day. These are really well-realized articles. But the big winner has to be David Bowman’s The Darkness Beneath: Lower Caves, part of a series of David Bowman’s dungeons in Fight On!; this can be found on pp. 78-110 and it is absolutely stellar. David Bowman’s contributions to Fight On! are universally exceptional and this is no different; he makes fantastic things.
4. OVERALL What a terrific value! 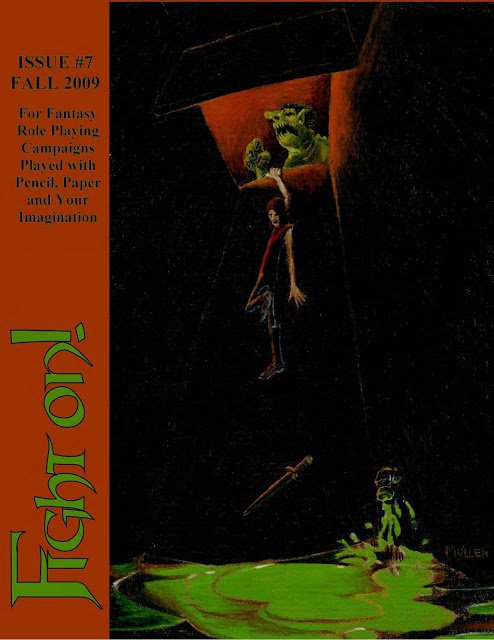 1. ART The cover feels like a 1990s RPG invoking memories of adventures in decades prior, and I mean that in a kind way. Matthew Riedel gives us a lovely splash piece on p. 7, Bill Hooks provides some wonderful character art on pp. 14-15, Mark Allen puts in lovely work throughout including an interesting drawing on p. 48, and once again Lee Barber returns to put in beautiful work all over this issue.
2. CONTENTS In its 88 pages, this issue again trends towards the slimmer side for an installment of Fight On!, but shows a good variety of topics within. James Maliszewski is back with more Empire of the Petal Throne content, Calithena is featured several times, and even James Raggi IV of LOTFP fame shows up with some thoughts. 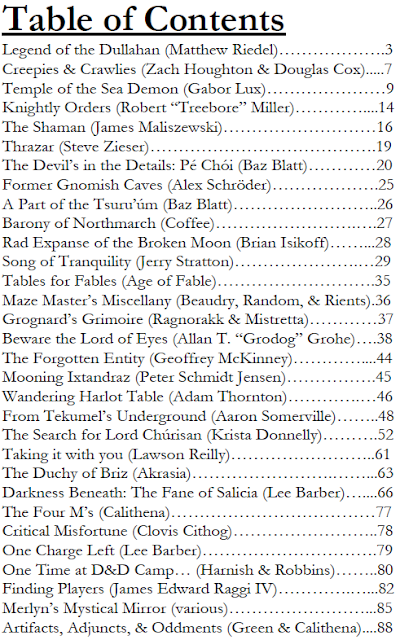 3. STANDOUTS The Fane of Salicia by Lee Barber is the newest in the series of Darkness Beneath dungeons at this point and is amazing on pp. 66-77. The big hit is M.J. Harnish and Ben Robbins’ One Time at D&D Camp… on pp. 80-82, which is a fun piece of history.
4. OVERALL I can’t put my finger on it – maybe it’s the balance or placement of art to words, or the subject of the articles just not grabbing me all the way through – but I feel like this is my least favorite issue of Fight On! so far. 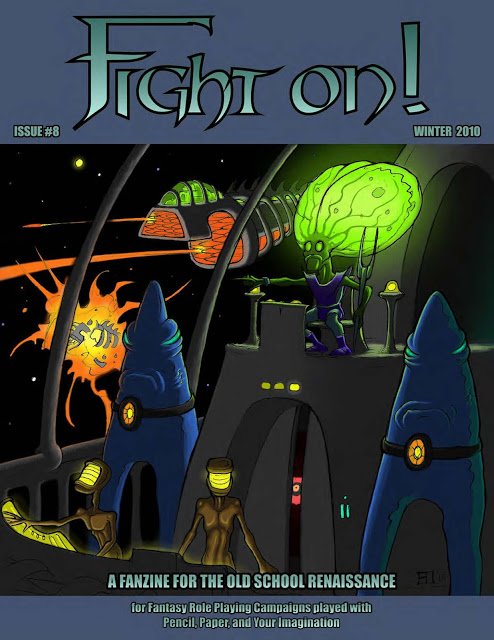 1. ART Erol Otus himself gave us the strange sci-fi cover to kick the issue off! Bill Hooks, Mark Allen, and Lee Barber provide some great, stylish pieces throughout the book. This begins right out the gate on p. 3 for Hooks, p. 4 for Allen, and p. 9-10 for Barber; more pieces follow from all of them. Allen has a standout image on p. 17 which is one of the most memorable drawings of the entirety of fantasy for me, and another great work on p. 39 and again on p. 57 – any of these could have been in a Moldvay module. Steve Robertson has a very old school drawing on p. 21 which seems like it belongs in an old TSR hardcover. Kelvin Green puts in a penanggalan on p. 43, which is always cool to see. On p. 79, Erol Otus again shows us how it’s done – I feel a little like his style, over the years, drifted a little towards comic art from the stuff we saw back in B/X, but in a really pleasing, approachable way.
2. CONTENTS If #7 was my personal low point, then #8 is a return to form. Still hovering around that 88 page line, this issue contains a lot of different topics from a big variety of voices. 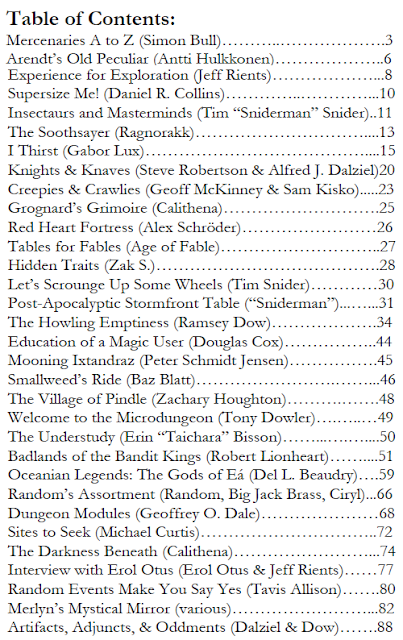 3. STANDOUTS The thing that grabbed me for sure is Jeff Rients’ interview with Erol Otus on pp.77-80. Otus is an absolutely top tier TSR-era artist in my books – I’m not sure what it is about his style that is so lovely to me. Maybe it’s my association of B/X with it in general, conflating my great love of B/X D&D and the sense of unexplored horizons I had as a kid leafing through those books with his art. I think there’s more to it than that, though. I really love his art, so it’s just great to see him capably interviewed. There’s a contribution from Zak S., later to be the author of OSR favorites like Vornheim and Maze of the Blue Medusa; he provides a very table-ready d100 chart of NPC quirks on pp. 28-30, so you can quickly differentiate what you expected to be background white noise from the other background white noise when your players decide they’re suddenly very interested in the nameless blacksmith who was definitely named Moldirk the Crow-Fearing the entire time. I loved the Blue Snail on p. 23 by Geoffrey McKinney and Cal (inspired by Samuel Kisko) – what a tremendous idea! I’ve played games with towns on the back of turtles, but the adorable snail here is terrific and the details around it are absolutely lovely.

4. OVERALL This issue is just great. It’s a really interesting spread of ideas and discussions, with great art throughout. This is one of my all-time favorite issues of Fight On! magazine.

That’ll do it for this installment in my series of zine reviews; as always, let me know what you think about the format I’m using – since it’s gonna get used for more Fight On! and eventually others like Knockspell and Black Pudding as I go through the massive amount of stuff I have that I wasn’t around to review when it was new. I don’t know if I am married to the format yet, though I do like the relative brevity. Since Ignatius Umlaut didn’t email me in a fit of rage last time, I suspect we’re safe to keep using screenshots of tables of contents and cover pages; if this is not the case, Mr. Umlaut, and you’re lurking out there, feel free to give me a shout on Twitter @dungeonspossums or via the contact me link at the bottom of the blog and let me know.