Continuing my various catch-up posts of things I was thinking about in October and November when I wasn’t around, here’s a monster-of-the-week suitable for use on your wilderness or remote village encounter lists.

He Who Stalks Between The Oaks 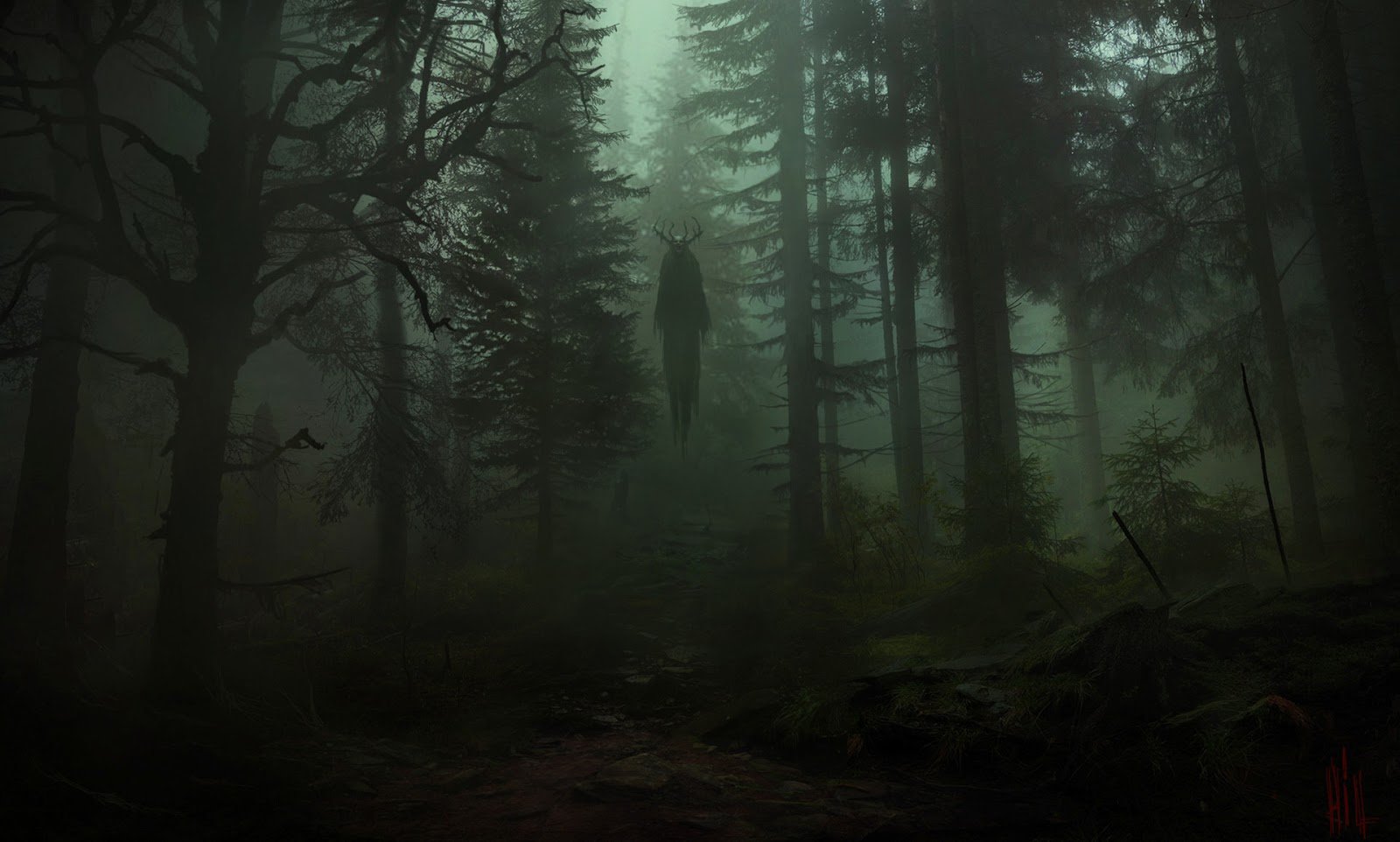 There are many tales of bogeymen and monsters in the frontier villages that encroach on the edges of forests, and for good reason. Curious children and foolhardy men who think too casually of the woes of the woods and venture deep into their shadows are often neither seen nor heard from again. It falls to the elders of the community to keep these poor souls from falling prey to what lurks in the dark underbrush of the ancient forests, from joining the autumn leaves and white crows in the realm of things which once lived, but live no more, and to do that, various spooks and specters of the imagination are conjured up and pass into legend.

Sometimes, though, that’s not needed. Sometimes the shadows existed already, and simply waited to be given their names. Sometimes they haunted the land before men and women walked the world.

He Who Stalks Between The Oaks has always been there, in the misty mornings, in the twilight of dusk when the shadows are longer than seems real, in the pitch black of night – seen only in snatched glimpses from the corner of the eye, the stolen seconds between sleeping and awake, the instants that last forever when the sensation of being watched becomes too much to ignore. From behind the bark of the birch trunk and the oak tree and the poplar, between the pitch black branches that claw up through the shadows of the ancient forests, he watches. He bides his time. He waits.

And when the time is right, he feeds.

When the leaves rattle from their branches in the dead of winter and the snow is impossibly white, his shadow casts a chill deeper than the whistling north wind. He Who Stalks Between The Oaks knows no season, no age, no time. He Who Stalks Between The Oaks is always there and has always been there. Those who have survived living on the indistinct edge of civilization and the old world, where his presence is still felt amongst the wizened trees, they know he always will be there. When the birds stop their songs, and the world becomes entirely too still, those who have lived in his lands know that’s when he is closest. But he is never far; never gone completely.

He Who Stalks Between The Oaks is known to every culture near ancient forests by many names. All civilizations who have wound up near his territory has conjured myths from the comparative safety of their campfires to explain the otherworldly disquiet of his presence. None of them are correct, but it does not matter. He Who Stalks Between The Oaks is a primeval predator. His proportions are disconcerting to those who sneak a look at his shadowy form from between the leaves of the woodlands; arms reaching nearly to the ground, sinewy legs too thin to support his 8′ height, his chest too narrow to hold the organs that sustain man, his ribs too numerous and fine. Shadows cling to him like a cloak, obscuring his movements in the dim light of the forest. His face has too many eyes, but no one is sure just how many, and they blink in the wrong direction and never at the same time. Where a man has a jaw, He Who Stalks Between The Oaks has a slit, and those few unfortunate souls who have survived seeing him take his meal from the flesh of their companions describe the whole head lolling backwards and unhinging to swallow arms and legs whole in defiance of reason, while a dozen prehensile tongues wrap around the meat and pull it down into its gullet. And atop his misshapen head is a crown of antlers.

Of course, it’s possible that isn’t all entirely true. Maybe some of it is the feverish nightmare of those who have spent too long in the shadowy gloom of the deep woods. Maybe someone strayed too close to the groves held sacred by the elves. But that doesn’t quite explain why the elves fear the name just the same.

Notes: He Who Stalks Between The Oaks has multiple attacks at his disposal.
His hypnotizing gaze can function as a Hold Person spell 2x per day as if a sixth level magic-user.
He can make claw attacks for 1d6 damage as if he has the range of a polearm due to the length of his horrific arms.
He can gore opponents in melee for 2d10 damage using his antlers.
He can fling 1d12 shadows as razor-sharp magical darts, projecting them in a spray 30′ long and 20′ wide forward; these do 1d8 damage each. A save vs breath will halve damage. This attack is not possible if he is lured into an area of full sunlight or equivalent.
If he succeeds in slaying a foe, he will attempt to swallow them whole by flipping his head back; if he is not interrupted in doing so, he will immediately regain 2HD in HP.
Unless prevented by doing so by some means, this monster can cast Invisibility at will, Darkness 15′ Radius at will, and Scare 1x per day.
He can be harmed only by magical weapons and spells.

It is recommended to add an entry to forest encounter tables for this monster which direct you to roll on a second table full of many sightings and few actual encounters. He does not pursue aggressively if contact is successfully broken, but he continues to lurk in the forests and can be encountered again. Such a secondary roll table is below:

He Who Stalks Between The Oaks should be portrayed as an incredibly threatening presence in the woods. It should be tense and uncomfortable to be near his territory.

*On treasure: This monster does not have a hoard of treasure or carry anything of value. However, slaying it will result in its bizarre body essentially putrefying and evaporating extraordinarily rapidly, leaving extraordinarily valuable magical reagents behind. These are blatantly magical and rare to any who observe them and would fetch the equivalent of a Type F hoard in value if sold to an interested party (alchemists, wizards, etc). To identify and extract the remains which are valuable reagents, conduct an intelligent or wisdom check by rolling under the relevant stat (modifying the roll in the player’s favor for any positive bonuses and against them for any negative modifiers on the relevant stat) on 1d20. If converting it for 5E or similar, a DC15 Arcana check or Nature check will reveal the valuable bits and allow their safe extraction; failure will destroy the fragile reagents. Additionally, locals would be extremely pleased to learn of its death should proof be produced.

If this creature is reduced to one-third of its hit-points, roll morale for each turn it remains under this threshold. On a failed morale roll, it uses every means at its disposal to break contact and flee extremely rapidly. The forests tremble and moan as if alive when it does so.

If you like this monster and use him in your game, let me know! I can be reached over on Twitter @dungeonspossums, and I also stick around lots of places like MeWe, Facebook, and more! Drop me a line and tell me how many characters got murdered by ignoring superstitious loggers near an ancient wood.

2 comments on “He Who Stalks Between The Oaks”