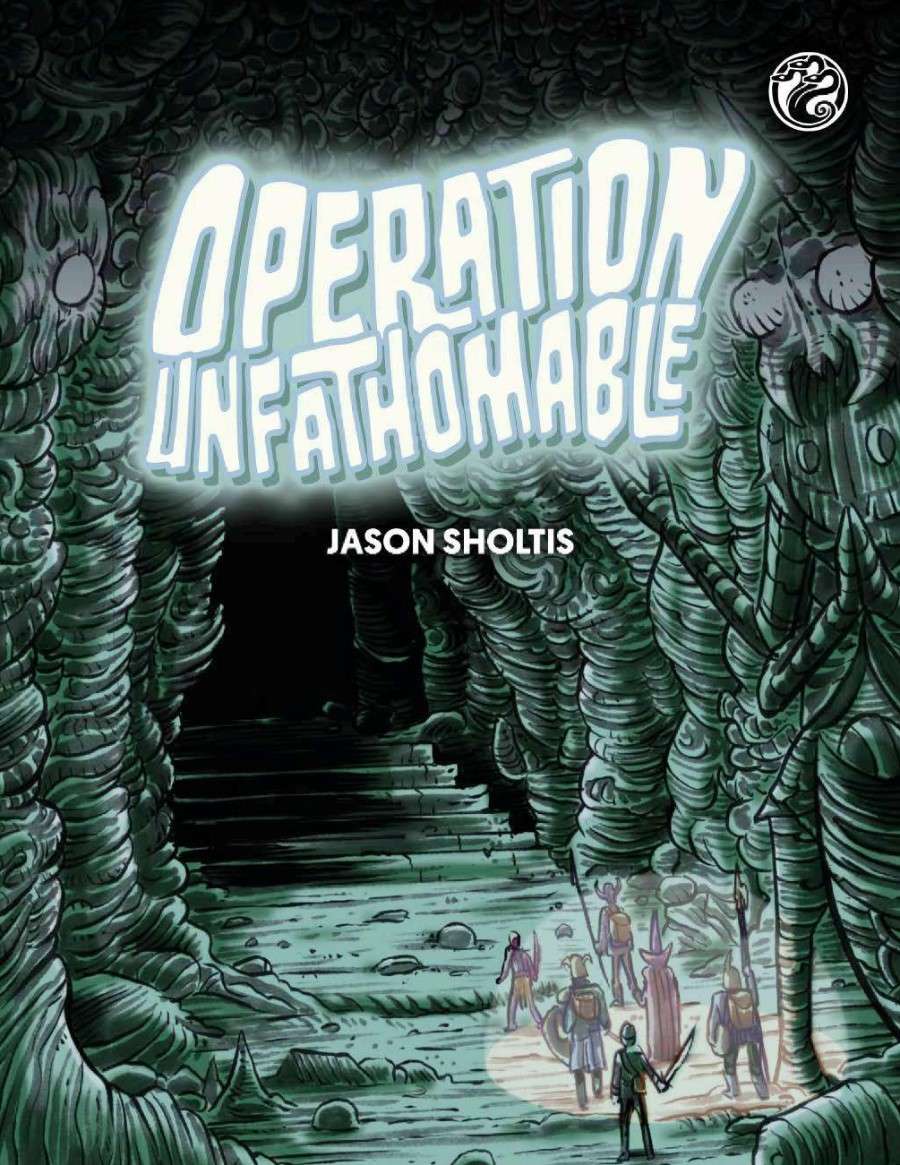 Jason Sholtis is the man behind the ever-popular Dungeon Dozen blog and the books based on the same d12 roll tables project. He’s also the mind responsible for Operation Unfathomable, a tremendously unique look at the underworld – or Underdark, if you’re brand-loyal to D&D – that has received pretty much unanimous praise since it was released. Coming from his home game (and a companion blog), Jason’s approach to the underworld is delightfully fresh, with a holistic view towards creating a self-sustaining campaign that is as fun as it is alien and dangerous. It’s easy to go wholly grim or wholly gonzo or even fall, lukewarm, somewhere in between, but thanks to Jason’s writing and inimitable artistic style, Operation Unfathomable suffers none of these fates. Let’s talk about this book!

Operation Unfathomable was launched via Kickstarter last year and reached press early in 2018 thanks to the hard work of the folks at Hydra Cooperative. Hydra is the indie publisher responsible for the absolutely awesome Misty Isles of the Eld, Slumbering Ursine Dunes, and Fever-Dreaming Marlinko, which have gained well-deserved popularity amongst the OSR D&D community for being awesome and imaginative. Jason and his underworld fit in well here, as the Hydra brand seems to be focused on (and actually delivering) extremely playable, interesting, altogether special products.

Operation Unfathomable is a well-done book. Jez Gordon deserves a lot of the praise here; his layouts are extremely readable and well-organized. It opens with Jason’s instantly-identifiable artwork in plenty to set the tone of the book and then follows it up with an introduction to the travelogue-style guide character and a very useful, clear table of contents. The black-and-white production of the book is extremely sharp and Jez makes good use of the art from all the contributors throughout. Jason’s art is, of course, extremely unique, and recalls wonderful stylistic influences (such as Al Williamson’s Flash Gordon or Secret Agent Corrigan, or basically anything in 2000AD) with its ink-heavy approach. It’s as much old school comic book as it is old school D&D, and it is all the better for it. It’s tremendously atmospheric and a joy to behold and I really don’t have enough superlatives to laud it properly. The book is laid out in such a way as to make it almost impossible to miss the game parts; some setting books become easy to miss the trees for the forest, to awkwardly borrow and manhandle an idiom; they provide the tools needed to play the game, which is sometimes exactly what you want, but they provide only that, or are put together in such a way as to make it hard to find the connective tissue of the campaign. Operation Unfathomable does not suffer from that fate. Between Jason’s direct approach to writing and Jez Gordon’s clear layout, you never have to wonder how whatever is being presented is supposed to fit together.

Organizationally, the book is split into a few major sections: the introduction, covering Jason’s explanation of the underworld, handouts, and his advice for running the game; the underworld itself including both the details of the setting and the events/phenomena/denizens; the actual meat and potatoes of the setting including DM’s papers and encounter charts; and finally a series of extremely substantial appendices before the maps at the back of the book suitable for photocopying.

The underworld is weird, alien, and unique. I said before that it’s easy to go too gonzo or too grim, or, in avoiding both, end up somewhere unoriginal in between. Jason makes that generalization look downright stupid. His underworld is deadly dangerous and involves the sincere assumption that most of your number will end up in shallow rock cairns made by tired survivors repeatedly throughout the campaign; however, it is also full of amazing, colorful things straight out of a weird fantasy or sci-fi anthology from that strange nascent era at the start of the 60s where lines between genres weren’t so stark. It is amazing how varied and imaginative the creatures and characters involved are. I could spend the length and breadth of this article just describing, one by one, his awesome creations, from death ray myconids with six-shooters to straight-up ridiculous, grinning fat newt-like beasts of burden to magma creatures and beyond. Seriously if you were to buy this book just for the encounters and bestiary alone and throw out the rest you’d still end up with more original ideas per square inch than most of us will come up with in a lifetime. Jason makes everyone look bad. It’s completely insane how many fun ideas are crammed into so little space – without being so overly dense as to become unreadable or intimidating or awkward. Like other aspects of this book, it’s hard not to end up just lavishing praise on Jason. It’s just such an electric feeling to open literally any page in the book and land on a bunch of polished, table-ready, new ideas.

Here and there (“here” being throughout the book and “there” being the end of the book) Jez sprinkles in some great maps in a couple styles that really suit the book and complement Jason’s art style very well. Some of them are clearly the hand-drawn sketches of an adventurer, while others are like a BradyGames strategy guide cheat sheet for an unreleased game.

One of the cool aspects of the book is Bardolph, the lone survivor of the author’s home game set in the underworld of Operation Unfathomable. He serves as a guide along the way, offering color commentary and the voice of personal experience on the various denizens and locations of the underworld, as only a caustic 15th century war vet transplanted into the deepest caverns of an alternate world could. It’s a fun window into the home game and often reveals tiny clues through the text (contributed, I believe, by Barry Blatt) of his comments to the way the campaign went at Jason Sholtis’ table. My sole criticism of this very fun travelogue series is the fact that the same art of the character often appears on every page for a stretch of the book at a time; there isn’t even a mirrored version of the artwork on opposite facing pages, or what-have-you. I’d have liked more variety in his artwork; I know this is a petty concern but it’s something that jumped out at me when compared to the absolutely bonkers variety of art pieces included otherwise and it detracted a bit from what I considered one of the funniest and most enjoyable parts of the book.

This book provides you with a pretty massive series of encounters and adventures built-in, as well as a summary campaign that will take players all over a gigantic underground expanse. It’s so full of events and ideas that it’d be pretty hard to run out, period. You’re given an entire introductory encounter line to drive the game into the underworld and a matching entry point on the map to begin the campaign in earnest; like any gridcrawl thereafter you simple explore and as the players interact with the world, the massive encounters/factions/monsters/events lists start to tumble like dominoes, taking your game in a different direction from mine. Any time you might feel lost, Jason has something to fill the space and push your game forward in a completely open-ended fashion. It really embraces all the best elements of the old school play styles and allows for players to become immersed in a really well-realized, living world with tons of activity happening in the backgrounds almost automatically. It feels alive, and it’s very rewarding.

Other things to touch on and specifically praise:

Rating System Changes:
Update 20 Mar 2019: A new n/10 rating system has been instituted to more clearly express my feelings. The legacy n/5 system was always supposed to represent the top half of the n/10 system as I really only review books I really enjoyed in the first place (so they’d all be 6/10 or better) but under that n/5 system, a 1/5 is actually still a very good book, but this is not clear to casual observers. For this reason, the new n/10 system is being used going forward, and is being ported backwards to old reviews. The corrected n/10 value for this review is immediately below this update text. Following that, the original review text is unaltered. A detailed post on this subject is forthcoming. 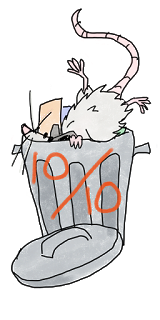 You would have to be blind not to see this coming. I try to spend my gaming budget carefully and as a result I end up with great books that are easy to review. Jason and Hydra Cooperative get five smelly marsupials out of five with great ease. Keep up the great work, and please get Odious Uplands into our hands soon!