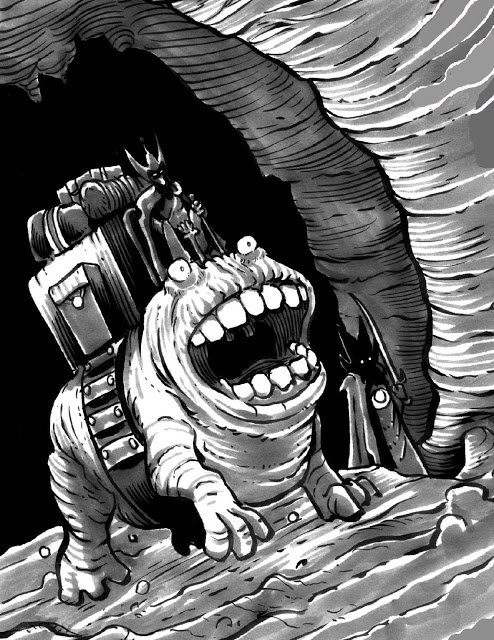 Art by Jason Sholtis, published in his book, Operation Unfathomable

Zak S, who wrote Vornheim, Red & Pleasant Land, Frostbitten and Mutilated, the majority of the forthcoming Demon City, and some other stuff too, has written up a little questionnaire for the OSR blog world to answer in the wake of news dropping that Google+ is finally being shuttered. After sharing it around via Twitter the other day, I knew I’d have to fill it out myself, especially since I really only recently actually began to join the OSR conversation at all to begin with. As I’ve said before on this blog and elsewhere, though I learned about the OSR as a group or movement ca. 2011 or so, I really did not involve myself in it socially until this spring and summer. It’s interesting seeing the points of view from all of these folks who have been involved much more heavily all along, as more than just a casual consumer of the occasional LotFP PDF or what have you.

So, here we are – I filled it out from the point of view of a long-time gamer, who has been buying OSR/DIY products for about six or seven years, who only just began to involve himself a few months ago in the overall community. Let’s go:


1. One article or blog entry that exemplifies the best of the Old School Renaissance for me: For me, the piece entitled “The Dungeon as a Mythical Underworld” by Jason Cone in his PDF of Philotomy’s Musings exemplifies an important piece of wisdom to really internalize: the world of adventure is inherently going to be hostile to the players, and may not make earthly, predictable sense, because it is itself a living character central to the game world. Not all games must be gonzo or eschew Gygaxian naturalism and ecosystems and that sort of thing, but not all games must make perfect sense when compared to reality’s rules, either, because we’re not dealing with reality – we’re dealing with fantastic fiction where the entire point is for challenges to arise and be overcome by would-be heroes and graverobbers.

2. My favorite piece of OSR wisdom/advice/snark:
The answers are not on your character sheet (probably).

3. Best OSR module/supplement:
Assuming by “OSR” we mean “not TSR or original to the old games” I am going to say the best module is Broodmother Skyfortress for LotFP, by Jeff Rients/Ian Maclean/Alex Mayo/Jez Gordon/Craig Judd. This is a nearly impossible question given the preposterous number of exceptional products out there. The best supplement is unquestionably Vornheim by Zak S, I think.

4. My favorite house rule (by someone else):
Depends how we define house rule, but barring “stuff I’ve stolen from publish games and wedged into D&D” I’d say it’s Jeff Rients’ carousing rules, because they’re hilarious and consequential.

5. How I found out about the OSR:
After a long break from the internet side of RPGs, during which I just peacefully played what I wanted to play in person, I resurfaced in around 2010 or 2011 or so to research something or other about AD&D and B/X. I was recovering from being severely injured, playing RPGs and completely burnt on years of largely meh 3.5E – I was playing 4E and enjoying it but finding it slow and crunchy and missing something I used to enjoy about games from when I was younger. Way back then, I was using B/X and 1E and 2E in some horrific mish-mash that only made sense, I am sure, to our group, but I wanted that experience back. I expected whatever it was I was seeking at the time to be an esoteric detail tucked away on some tiny forum or something, only discussed by three greybeards with no friends – which is more or less what the old school games thing resembled way back when during the heyday of 3.5E, when I’d stopped checking out internet forums about RPGs and such. I went on to quickly discover instead that tons and tons of other people from all over the world were in full swing playing and discussing these old games I was still interested in. I was amazed and purchased some stuff and got back into it – but still didn’t involve myself online, thinking I had nothing to offer, until now.

6. My favorite OSR online resource/toy:
Ramanan S produced some character generators that are so easy and great that you have no excuse not to generate a dozen and start every game as a DCC-style funnel.

7. Best place to talk to other OSR gamers:
Apparently it was G+, but I showed up late. For me, it’s been Twitter, actually.

8. Other places I might be found hanging out talking games:
G+, blogs, etc. I also have social media accounts in varying states of disuse all over the place.

9. My awesome, pithy OSR take nobody appreciates enough:
Dying hilariously is probably the most fun part of the game – I can’t recall my first magic item successfully rescued from a dragon lair, but I can recall all kinds of preposterous deaths.

10. My favorite non-OSR RPG:
Traveller is OSR whether you like it or not so I can’t really list it here. For truly new-school games I’d say D&D 5E, GURPS, or Unisystem.

11. Why I like OSR stuff:
It’s the style of play I grew up enjoying, but benefits from thousands upon thousands of man-hours of clever, clever people figuring out infinitely smarter and more beautiful means to do so and present it over the course of several decades. It’s like having your cake and eating it too – tremendous production values and honest care and desire to make a wonderful end product, created by people who aren’t a giant corporation with specific marketing interests to assuage, being crammed into the very specific niche I enjoy. Seeing people just do things and share things they love is beautiful. Seeing them make money on it is beautiful. It’s good stuff.

12. Two other cool OSR things you should know about that I haven’t named yet:
I don’t think I’ve mentioned Yoon-Suin on this blog, but it’s a super cool setting book. I’ll get around to reviewing it sooner or later. I also haven’t mentioned Hot Springs Island, which is not necessarily OSR but is definitely DIY and it rules and I will have some stuff about it published shortly-ish.

14. A game thing I made that I like quite a lot is:
I don’t make a lot of stuff, so I’d say the Random Advancement Shaman I made in the vein of the random advancement classes by Jeff Rients and Zak S (and others) is my crowning achievement?

15. I’m currently running/playing:
Mostly D&D 5E, tragically, as a DM. I would kill to have the time and group to play Traveller and B/X though. Fatherhood and job-having is currently killing off all of my time.

16. I don’t care whether you use ascending or descending AC because:
It doesn’t matter whatsoever. Descending is older-school. Ascending is more intuitive and you damn well know it. You can make, find, or steal a chart that will convert either way. It literally doesn’t matter.

17. The OSRest picture I could post on short notice:
It’s at the top of this post. I am a huge fan of old school D&D art and I have tons of it, but that’s old school TSR art. OSR art is sort of it’s own thing, and the OSRest art of all is, in my simple opinion, possibly that of Jason Sholtis. It’s blacks and grey washes, evoking the TSR aesthetic; it has high contrast and deep shadows; it shows the world of adventuring with ease; and like so much of the OSR, it’s just a wee bit weirder than what came before. I could post a thousand examples of great art though. Thanks for being great at this, Jason!


There, I did it. I completed a memetic questionnaire – and on-time, this time, unlike how I did Jeff’s 20 Quick Campaign Questions about a million years later than everyone else!