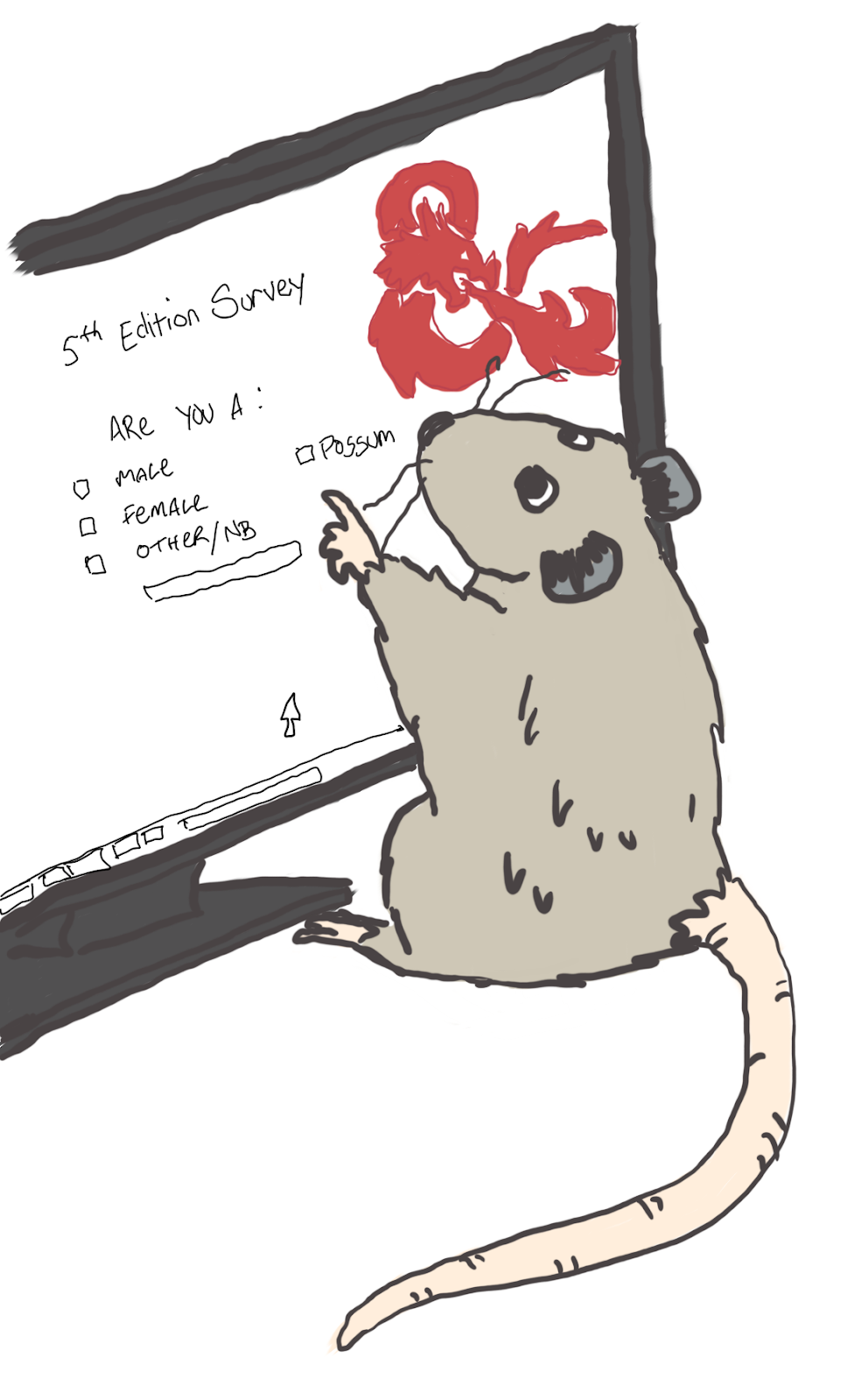 So it’s no surprise to anyone, then, that the current version, Dungeons & Dragons 5th Edition (or 5E) is a big success too, selling tons of copies. What is somewhat surprising to most of us old hands is to see the way it has dominated the scene, spawning or elevating a plethora of podcasts, live streamed games, and recorded actual play videos to create a new genre of entertainment (or, at least, a new take on a existing genre) and dragging in thousands and thousands of new players, returning players, and system converts through the success of these new media projects. While the 4th edition was seemingly tied to anxiety about the explosion of MMORPG video games in the early-mid 00s, the 5th has somehow become inextricably linked to services such as Twitch and YouTube. It’s a bona fide hit, and with its success we’ve also seen a huge rise in appreciation for, attention to, and markets surrounding almost all variety of tabletop role-playing game. It’s kind of impossible to be sure, but it certainly seems like more people are playing and discussing role-playing games than ever before. It’s wonderful to see. The old saying, “a rising tide lifts all ships”, appears to hold true with 5E, and it’s terrific news for our beloved hobby.

Dungeons & Dragons 5th Edition does a lot of things right. It also does some things I’m not a big fan of. I’d like to talk about this, and probably Dungeons & Dragons in general. This comes about after I filled out the very long (and repetitive, thanks to seemingly endless repeat control questions) survey posted by Hasbro subsidiary and D&D producer Wizards of the Coast. The survey was intended to find out what we like and don’t like about 5E as a product and model, how we use the game, how we came to be role-playing game nerds to begin with, and so on. It covered a lot of ground. It also missed a lot of ground, which I’d like to address. As a result of this, it’s probably going to come off as a little bit negative. I don’t mean for that. I hope anyone reading this takes away a sense of genuinely constructive criticism from a fan who just wants to offer clear feedback with the goal of improving the product. Because of that, quibbles will seem heavier than praise, but the simple fact is that I very much enjoy 5E and I mean the compliments with much greater fervor than the detractions.

So, since this is the first distinctively 5E discussion on this blog, I’ll understand if OSR folks tune out now. But for those who stick around, let’s jump right in!

There’s a lot to like about 5E! It’s a good, solid system and WotC have done a good job of managing the game. Some high points:

I prefer to be positive and supportive where I can; a lot of this hobby can turn negative really quickly and I think it’s nice to offset that where I can. I want to focus on things I like. But I like 5E, and so I want it to improve. Honest feedback enables that. It’s not unsolicited, either; I’m not just out here angry for the sake of it. Wizards of the Coast specifically requested feedback and responses so they can choose the best path forward. So I don’t want this section to be misconstrued as hateful nor as me saying I could do better if I were in charge – just that my tastes are what they are, and my experiences are what they are, and therefore this is just a look at what I’d prefer to see WotC work on.

Dungeons & Dragons 5th Edition is a good system. It’s probably fair to say that it’s a great system. It’s certainly, overall, my favorite system since the AD&D days. To be honest, I think if we’re all honest with ourselves it is a more coherent mechanical design than any other version of D&D (the quality of some of the modern design principles and style of play, of course, remain wildly up for debate – the OSR exists to ensure that!) I have enjoyed my time playing D&D across the many versions, even though I enjoyed some more than others (that’s gonna be an article all by itself, I bet), and 5E is no exception. It’s very fun. With some hiccups here and there, it’s quite easy to pick up for new players, and the Starter Set is a great way to get people into the game. The best parts of 5E are some of the brightest spots the franchise has ever had. Playing it is fun, running it is fun, and overall I think it’s worth the price of admission for the core three rulebooks (Player’s Handbook, Dungeon Master’s Guide, and Monster Manual, for those somehow unaware of that phrase yet managing to make it this far into the article). It’s very easily worth the cost of the Starter Set or the Starter Set and PHB for literally everyone who is into or may be into D&D. It’s a great game.

But there’s always room to improve, and Wizards of the Coast know this. That’s why they want our feedback; they want to bolster their efforts in the directions that statistically mean the most to us as a market, so that we’re more likely to spend money on their product. Dungeons & Dragons 5th edition has some issues, and a lot of them stem from the models that WotC are using to drive the product line. I’m not a business executive or some kind of marketing wunderkind, so I am not sure I can come up with alternatives for them – but that’s not the point of feedback. I just have to voice my concerns and, on the million-to-one off-chance WotC reads this, they’ll figure out what to do about it. So the above is my feedback – nothing more, nothing less.

As I near the closing of this article, I want to stress, one more time, that I mean no ill will with any of this article – even the stinging words about Beyond or the art. I like 5E. I play 5E. I am excited to play more 5E. I enjoy the WotC team as personalities and design staff. I look forward to what they cook up next and I will probably buy it. If you’re on the fence about 5E, I strongly recommend it – it’s a great system and the goods outweigh the bads by a huge volume in nearly every respect. You will get far more than you’re money’s worth out of this edition in terms of gameplay, and that’s what it’s all about. The only reason this post criticisms and all, exists, is that Wizards of the Coast asked for feedback. I believe the only way to give feedback is honestly and sincerely, explaining your reasoning in the process, and without mincing your words. I hope it comes across that way. Let me know what you think over on Twitter @dungeonspossums or on G+ where I post as +Dungeons and Possums.

9 comments on “Thoughts on Fifth Edition, Four(?) Years In”