A note before I continue here: If you share fire-related trauma or a fear of burning, this is probably not the post for you. It contains graphic descriptions and depictions of both. In order to prevent the possibly upsetting art from being previewed on the main page or used as the social media link thumbnail, here’s a possum. I hope this helps warn those who might otherwise be troubled by this content. Have a great day! 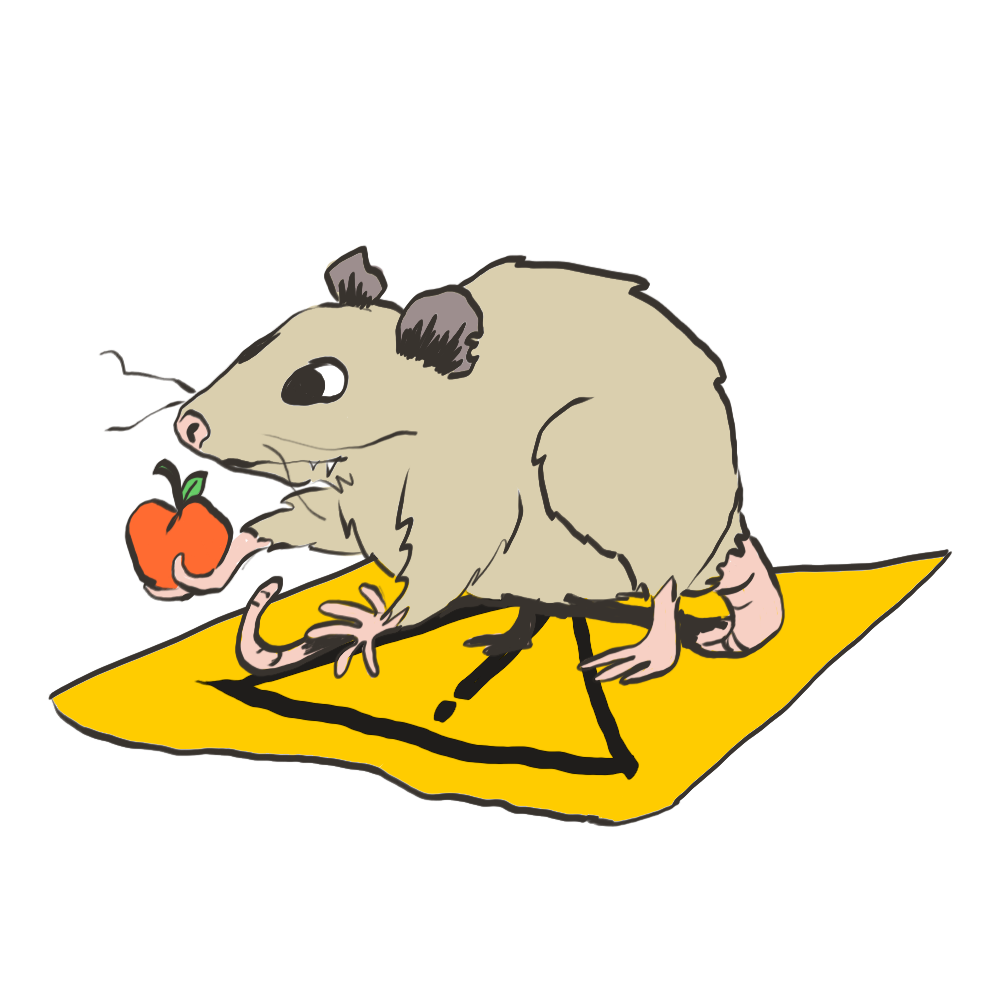 The caution possum doesn’t quite get it, but he’s trying his best. Look at his happy little fruit!

What if wildfires were a literal scourge, a curse, and firefighters were exactly that? What if there existed a horrifying fate for some, forced to stalk the world as a flaming corpse, aware only of the agony of your crackling flesh and the searing flames licking every inch of your skin, spreading fire mindlessly? What if those unfortunate souls felt every single anguish and torment, but could only shriek aimlessly like a dentist drill through blistered vocal chords, just to finally collapse in death – only to stand back up seconds later and continue to march inexorably forward on an unrelenting path, undeterred, screaming as the flames scorch him endlessly? 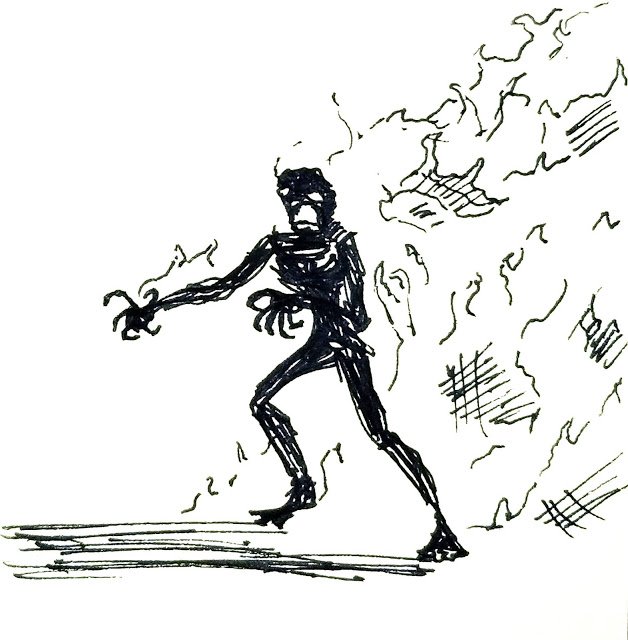 Years ago, I worked on an ambulance. I saw many unfortunate things, but very little of it impacted me, because it sort of becomes normal and you probably need to have some basic tolerance for the worst and most unfortunate situations of life to begin with. Paramedics and EMTs are weird and we share a dark sense of humor to get through it, usually. However, one thing that stuck with me: a man who burned himself very badly. It was an inconceivably agonizing thing to witness. Those images – and much worse, those sounds – have never left my mind. I will spare you the details, but it did leave indelible marks on my memory. When I conceived of this concept back in early August [this has been sitting in my backlog forever, for some reason], I had been speaking to a friend who has been through several of the California wildfires of the last couple years and whose relatives were having to evacuate the Carr wildfire and I came to remember that dying man and to think about the horror of a wall of flame slowly marching towards you, chasing you, eradicating everything in its path unflinchingly. I doodled an idea down on a post-it note and asked my wife what she thought of it. 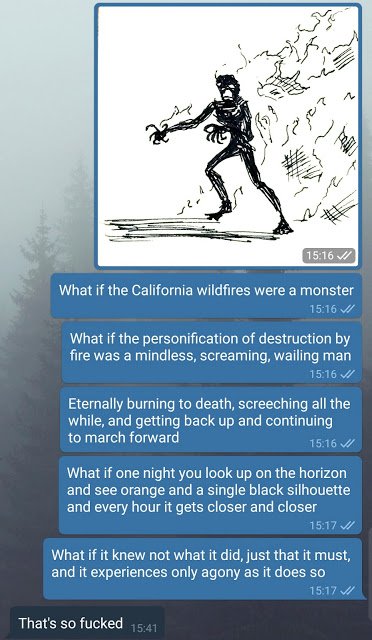 And so it was born. Wildfire as a tangible foe, a force of nature if nature were decided by a particularly cruel and torturous person.

The firewalker is a cursed thing. They were people, once, but set upon by vindictive magics until their bodies combusted. Not able to escape the earthly plane, when their anguished cries pierced the skies on their first death and they collapsed in a crackling heap of blackened flesh, their minds lost all grip on sanity. In the blink of an eye they clambered back to their feet, staring emptily into the world around them, and they began to walk. As they walk, burn, shriek, and die, snippets of memories blink in and out of their mind’s eye. They notice almost nothing about the world around them; they fixate internally on the shreds of memories that flash within, interrupted and blurred and contorted over and over and over by the unrelenting agony of endless burning death after endless burning death. The memories – of life, death, family – maddeningly devoid of context and ever so slightly out of range of the grasp of their blank brains, like words on the tip of their tongue, torment them as much as the flames. Each time they combust and die in agony, and awaken again on fire to burn once more, they lose a little more of their vanishing tatters of humanity to the confusing haze of pain and flame. Should the firewalker itself slay a humanoid, rather than that humanoid dying to the heat or flames that spread and scour the countryside, that humanoid is consumed also in flames, and will burn and wither and collapse and die, and then rise again to walk a fiery path indefinitely. It is in this way that the fire spreads, that a spark becomes a conflagration consuming huge swaths of land. It is for this reason above all other horrors that the firewalker is considered a horrifying plague, and why firefighters are so revered – and why they are prepared to slay each other first, should the firewalker get close to finishing one of them off.

The Firewalker
Notes:  The firewalker has 8HD, but does not die when these are exhausted. The creature merely collapses in agony, dead and not dead, same as when it burns to death. It rises once more shortly afterward, 1d12x10 minutes later, unless specific magic is undertaken to prevent this. To permanently end the firewalker, the creature must be laid down as if slain, and then, while it waits to rise again, it must be circled in salt and doused head to toe in blessed holy water. It must then be buried in sand such that none of its cracked, blackened flesh is exposed to the air. Finally, a Remove Curse or equivalent spell must be cast upon its form to release it from its material torment. Anything less than this, including if it awakens before the rituals are complete, is a failure, and the firewalker is restored with 8HD.
Notes: The firewalker attacks if hostilities are engaged upon it, and it will not cease attacking until it slays whatever troubles it. All in melee with it take 1d6 fire damage per turn, no save. All within a further 10′ take 1d4 fire damage per turn, no save. Enchantments or equipment which reduce or immunize against fire damage are effective. The firewalker has two primary means of attacking foes: it may make 2x claw attacks for 1d4 damage each, or it may breathe a gout of white-hot flame causing 3d6 damage. If it performs the latter, that will be its whole attack action for the round, and it may not do so again the following round. The flame breath can be saved against (vs breath, naturally).