Sometimes you just feel like rolling dice. The best way to do that, I’ve found, is to grab hold of a bunch of random tables from a book or blog and generate something new and exciting. One of my favorite solutions for that is James Raggi’s Random Esoteric Creature Generator, a short book which has now been published a few times that includes roll tables to create all new horrifying beasts to absolutely ruin your players’ day. Either of the preceding links should contain the same charts and advice, more or less, but the newer LotFP-published edition (not to be confused with the super early LotFP edition from 2008!) has much more artwork and this artwork is also significantly more polished and graphic. The choice is yours! Either way, Raggi gets at least some of your money and he will almost certainly spend it on weird books and bizarre Finnish concerts and that’s really what it’s all about, right?

Anyway, I felt like rolling some dice, so I took a peek at this book like I usually do when I want to roll some dice, and I started going down the list. As I went, I recorded my notes, and I’ll piece them together here. Let’s get to it – behold! 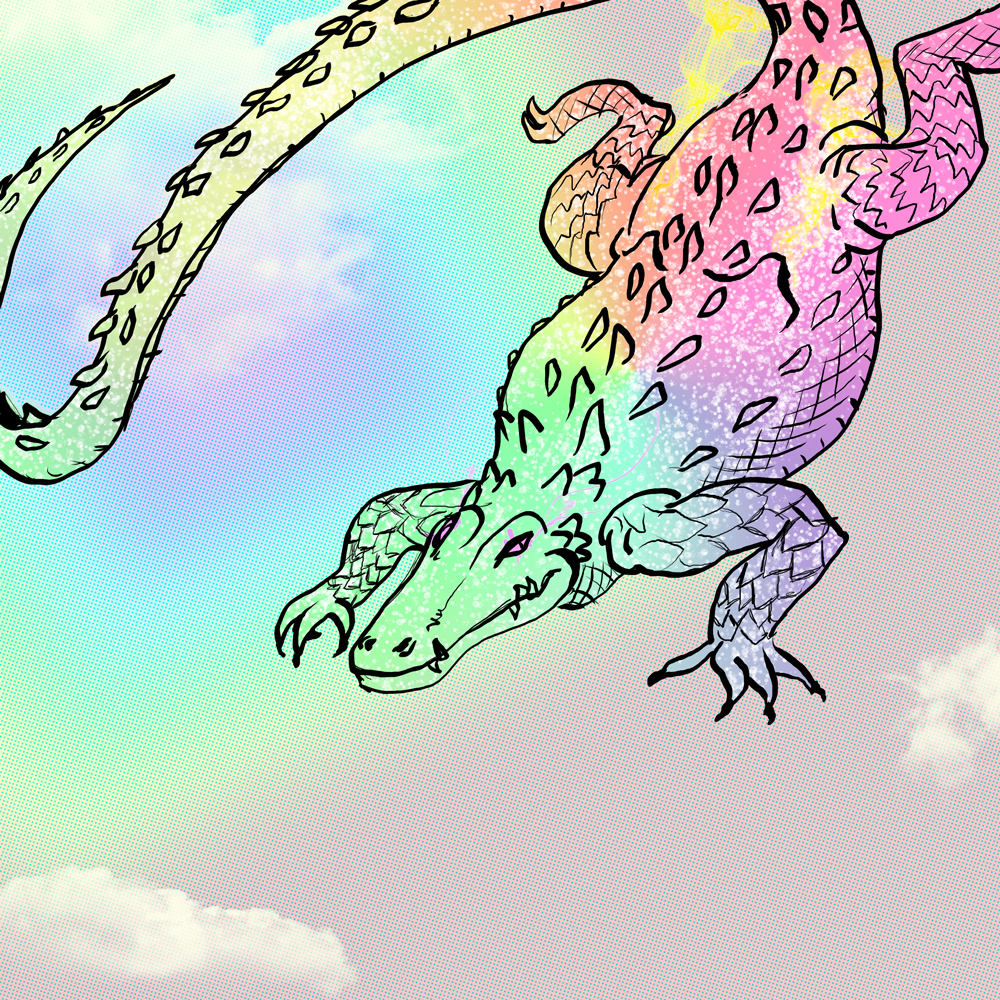 The Ethergator is a savage predator from the eerie wilderness of the realm of Faerie. In the multicolored jungles of the psychedelic fey, there are more otherworldly menaces than could be contained in the pages of all of the books of man. But even amongst them, few cut to the quick of the most primal fear of humanoids like catching the cold-blooded, calculating eyes of the Ethergator as it swims languidly through the grenadine skies and, in a flash, descends upon its hapless prey with iridescent armored scales and snapping jaws.
[I’ve written this and now I have to paint it and color completely intimidates me. Past me is a dick.]
So, clearly, that introduction (and its art) was put together at the end of the generation process. Let’s rewind a bit and go through our rolls, the outcomes of which will always be in square brackets:
1. Basic Body Shape – [16] – Quadruped; +10′ movement speed
The Ethergator is, like most gators and other crocodilians, a quadruped. It has four muscular, squat legs that allow it to walk in a swaying, aggressive motion that is difficult to stop once it gets going.
2. Basic Characteristics – [9] – Reptile; bite attack +1d8 [2] AC bonus, cold-blooded, scaly
Again, like other examples of crocodilian, the Ethergator is a cold-blooded reptile whose massive jaws are its most dangerous weapon. Its body is covered in thick scales which serve as a form of defense against other powerful beasts. It can usually be found sunning itself lazily in the glittering light of Faerie’s multi-colored suns.
3. General Types: Reptile – [1] – Alligator
The Ethergator is a long, powerful creature with a flattened body and snout. Its eyes, nostrils, and ears all appear along the top of its head, and its tail serves as a swishing rudder as it swims across the horizon.
4. Size – [19] – Enormous; double HD, damage +1 die, +20′ movement speed
Unlike most crocodilians, however, the Ethergator is not confined to a size best described as “reasonable.” Oh no. The Ethergator is a terrible, monstrous predator, measuring nearly 60′ end-to-end and weighing more than six tons.
5. Movement – [15] – Flying
Truly those who live in the realm of Faerie exist in a terrifying place. All around them, hallucinations made manifest fill the world; but above them, the Ethergator swims through the sky itself.
6. Attack Methods – [N/A] – Bite
Already a given due to the immense jaws afforded to the beast by its archosaur body.
7. Distinctive Features – [20] – Glowing Eyes; 1-in-6 lesser chance to surprise those with normal vision
The cold, unfeeling gaze of reptiles moves some mortals to great discomfort even in the natural world. The stare of an alligator is an unpleasant thing, reminding the human brain of its place on the food chain, stripping away the veils of dignity and superiority we have wrapped ourselves in since emerging from our past, where we huddled, terrified, in dark corners of the world. But the Ethergator preys upon creatures beyond just mortal man; the Ethergator hunts also the magical, and their alien minds endure the same sensation of prey being hunted when they witness the glow of the Ethergator’s eyes.
8. Special Abilities – [11] – Four special abilities (almost five!)
[72] – Bonus Damage on Great Hit 1d10 (Successes >4 or natural 20)
[43] – Drain Wisdom 1pt* (No saving throw, returns 1pt/hr; *Gas attack: 1d10x10′ [6] = 60′ sphere centered on Ethergator)
[146] – Fast Reflexes (+1 to initiative)
[90] – Charge Attack (2x damage on charge attack to enter melee)
The Ethergator is an apex predator. In its domain, all creatures fall into the category of prey; the only question is how large a meal the Ethergator wants when it descends upon its victim. Though the Ethergator spends most of its time barely awake, lazily soaking up the rainbow sunlight of Faerie, when it chooses a meal, it dives upon them with incredible swiftness. Its taut, scaled body crashes into its prey like a meteor, massive jaws snapping and crushing as it goes, leaving tremendous wounds in its wake – often killing the poor, unfortunate creature in an instant. Those that survive to threaten the Ethergator, or to try to make an escape, often get treated to a noxious cloud of disorienting gas bursting from nozzle-like lamellae hidden between overlapping scales, weakening their resolve and senses. Because of its powerful sinews, coiled tightly like a malevolent spring, the Ethergator is capable of springing into action despite its great size with surprising quickness.
9. Tactics – [8] – Weakest Foe
The Ethergator is not proud, nor specifically spiteful; like all bestial predators, it often seeks the most return on investment for its exertions and will target the sick and the weak, the lonesome and unguarded. When it observes a pack of potential meals, it picks the weakest link.
10. Motivation – [10] – Territorial
As with all crocodilians, the Ethergator is not a terrifically intelligent creature. The term lizard brain exists to describe the extent of its thoughts. It is this cold, remorseless calculus of survival which makes it so inherently alien and terrifying to mortal man; our higher thinking sees shades of grey, whereas the Ethergator sees only the stark black and white of alive and dead, and aims to be alive, surrounded by the dead. It guards its hunting territory jealously from other predators and will aggressively seek mates to ensure its progeny are dominant. Stepping into its area paints a target on your back the second it notices you.
Okay, let’s put all that together!
The Ethergator

The Ethergator is a massive, flying alligator – a 60′ long, 6000lb behemoth of the spectacular realm of Faerie. It is armored with iridescent scales, and swims on ethereal currents in the skies above the towering technicolor jungles that cover most of the fey world. Its eyes glow in an alien color that humans can barely describe and which demihumans instantly dread. The Ethergator is a savage apex predator, territorial and violent. It crashes into battle with prey and interloper alike with immense displays of power and then gases the entire area (it is itself immune to this toxin) to weaken the minds of those it hunts. It is capable of inflicting egregious wounds upon its foes with its immense maw. The beast is not inherently cruel anymore than a hurricane is inherently cruel, but like any other force of nature it is a mighty foe to contend with. It is solitary and will select whatever prey it determines is the weakest.

The Ethergator gets a +1 bonus to initiative, it has a 1-in-6 penalty to surprise humans, and it can enter the melee like a gnashing meteor for double damage. Though the creature has no treasure on it, its lair contains the remains of many meals, and as it has no use or even conception of baubles, its giant mounds of dung and food scraps are full of treasure. This lair contains a Type E hoard.

The Ethergator resembles a magical, flying version of the Cook Expert monster, Giant Crocodile (X29), in a lot of ways. That stat block is very similar but with less magical weirdness. The Cook croc actually seems to have higher base damage output and a much better AC on its face, but no special attacks and Fighter 8 saves (making it an 8HD monster). I was kinda bummed that my weird monster came out to be so close to the mundane giant croc, especially since the mundane version appears tougher in some ways.

So, I decided to be a complete jerk, throw the Esoteric Creature Generator’s rule suppositions out the window, and modify what I got to more closely resemble the power expectations of the Cook Expert Giant Crocodile and my own conception of this randomly-generated beast being the terror of Faerie.


There, that’s more like the terrifying, sky-swimming monster I imagined.

This version has Elf 7 saves and a 0 AC because it’s magical as hell and flies through the goddamn rainbow skies on invisible currents only its glowing eyes can detect. Call the cops. You can’t stop me.

Well, this article, which I expected to be pretty short and sweet, got wildly out of hand pretty much immediately. Of great credit to James Raggi’s Random Esoteric Creature Generator is that almost every single result I’ve ever derived from it has been very inspiring and exciting to me, which means you poor nerds have to sit through all of those words up there. I always have fun generating monsters with it! If you like to roll on the tables in this book and you want to talk about it, or you want to point my attention to a better monster generator, or you want to tell me I am an idiot for not going with giant wasp wings or a bloated gasbag gatorblimp, hit me up on Twitter @dungeonspossums and let me know.