Well, here we are! The penultimate post of the SummerKnightsDraw art event. I’m going to do this last batch according to the format I’ve established thus far, and then turn right around and post the final image and a retrospective in a follow-up post. Let’s look at some drawings! 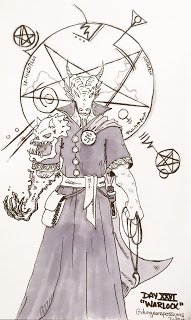 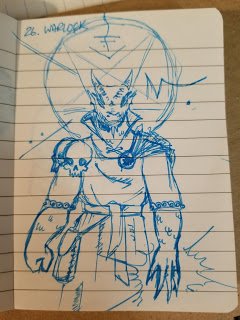 This was one of the easiest prompts for me to think of, but one of the hardest for me to finalize. As you can see, a lot of minor elements changed between the thumbnail and the final drawing; primarily, I made a ton of changes to the arms/hands. When I went to do the final artwork I decided that a real display of the sacrifices needed to make dark magic happen was in the cards, so I gave him a magical prosthetic of sorts, and I also decided to make the left hand hold some sort of physical focus for evil sorcery. I decided that one large demonic skull was more representative of the dark pacts of warlocks than some random human skulls. And as for the dragonborn himself, the original head seemed a little too… forthright? What I went with was more suitable for a demon-tied warlock, I feel.
Day 27 – Monster 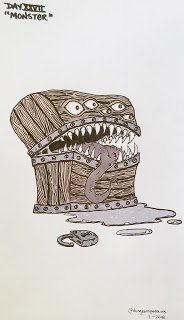 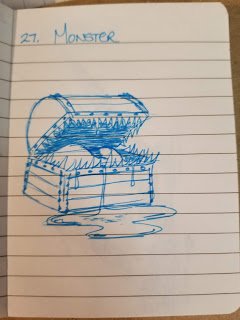 The list of D&D monsters is practically endless at this point, and many have become iconic in their own regard one way or another over the years. For me, I knew I wanted to draw a mimic, and frankly I didn’t realize it was better suited to Day 29’s Shapeshifter prompt until it was too late. But I am really pleased with how my mimic turned out. The colors are actually much better in person, as the rust at the edges of the metal really stands out more. One day I will have to scan all these in or something, so I can mess around with color and hue and stuff like that until they are consistent and more reflective of reality. But it’s a small nitpick. I also did much of this piece with my fine brush pen, which is very flexible. I wanted variable line weight practice and I really love how it turned out. All the wood grain and much of the other line work is done with that brush pen.
Day 28 – Beast Master 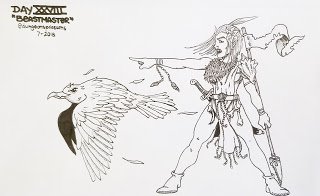 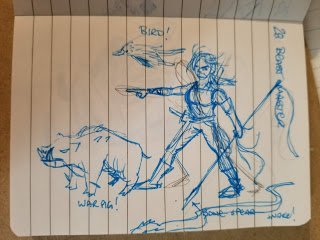 This is amongst my favorites. I was originally planning to go with a swarm of various creatures, as you can see from the thumbnail, but as I drew the real version I tried a number of different layouts for the animals and they just didn’t seem right. As soon as I started adding details to the lady and she sort of took shape before my eyes as tropical/beach themed, I became really excited to add more and more details to her, and by the time I was done the only real answer was a seagull with attitude. I tried a crab, but he seemed too awkward and static.
Day 29 – Shapeshifter 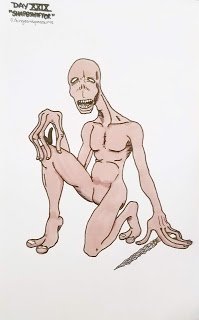 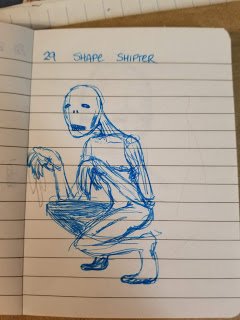 Shapeshifters in my games are sort of like a prehistoric relict left in the shadows. They were once common, but their minds are so alien that they see no problems impersonating a human to abduct some for use as food. They just straight-up do not see the problem, and they’re very off-putting. Few become flawless at passing for people, because their strange behavior usually gives them away. Their natural shape is a sort of misshapen, disproportionate mockery of a hominid. They do not seem to grasp technology very well and, left to their own devices, remain neolithic in terms of tools and techniques. Humankind hunted them down nearly to extinction eons ago, and those that survived hide on the fringes of human settlements as madmen and beggars, stealing food here and there, or live in remote caverns and forests away from human eyes. Though they now fear humans, they remain predatory and are deadly foes for unprepared humans.
Day 30 – Half-Orc 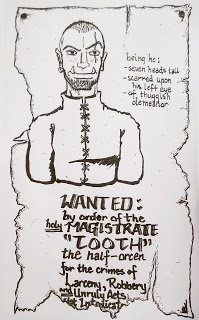 The Day 30 Half-Orc prompt was one of the days I was most excited for, since the first day of this challenge – because I knew just who to draw. I was so glad to finally get to do it. Tooth is a recurring character of mine. He’s shown up in games in some slightly varied forms as well as many doodles. In fact, he was one of my very first #workdoodle artworks when I started doing those a few years back. He’s a kind-hearted, sort of simple guy who usually seems to be a cutpurse or petty thief of some kind, just trying to make a quick buck so he can buy a beer and laugh with the rest of the tavern. He’s a likeable dude and his antics tend to be humorous. My familiarity with Tooth precluded any need for a thumbnail. Somewhere, I think on a post-it, I just wrote DAY 30 TOOTH and shoved it in my pants pocket, but that’s about it. I knew it was gonna be Tooth right away. A lot of this picture was also done with the same brush pen as used in the drawing of the mimic. I like it, but I do not have mastery over it yet.

And that’s the last true batch of the SummerKnightsDraw event doodles! I’ve got one last post in the series. The grand finale is due shortly and will make this a rather busy week for the blog. It will contain the final day of the event, and a bit of a recap of what I learned over all, which drawings I liked most, and that sort of thing. Sort of a retrospective, if you will. See you then!