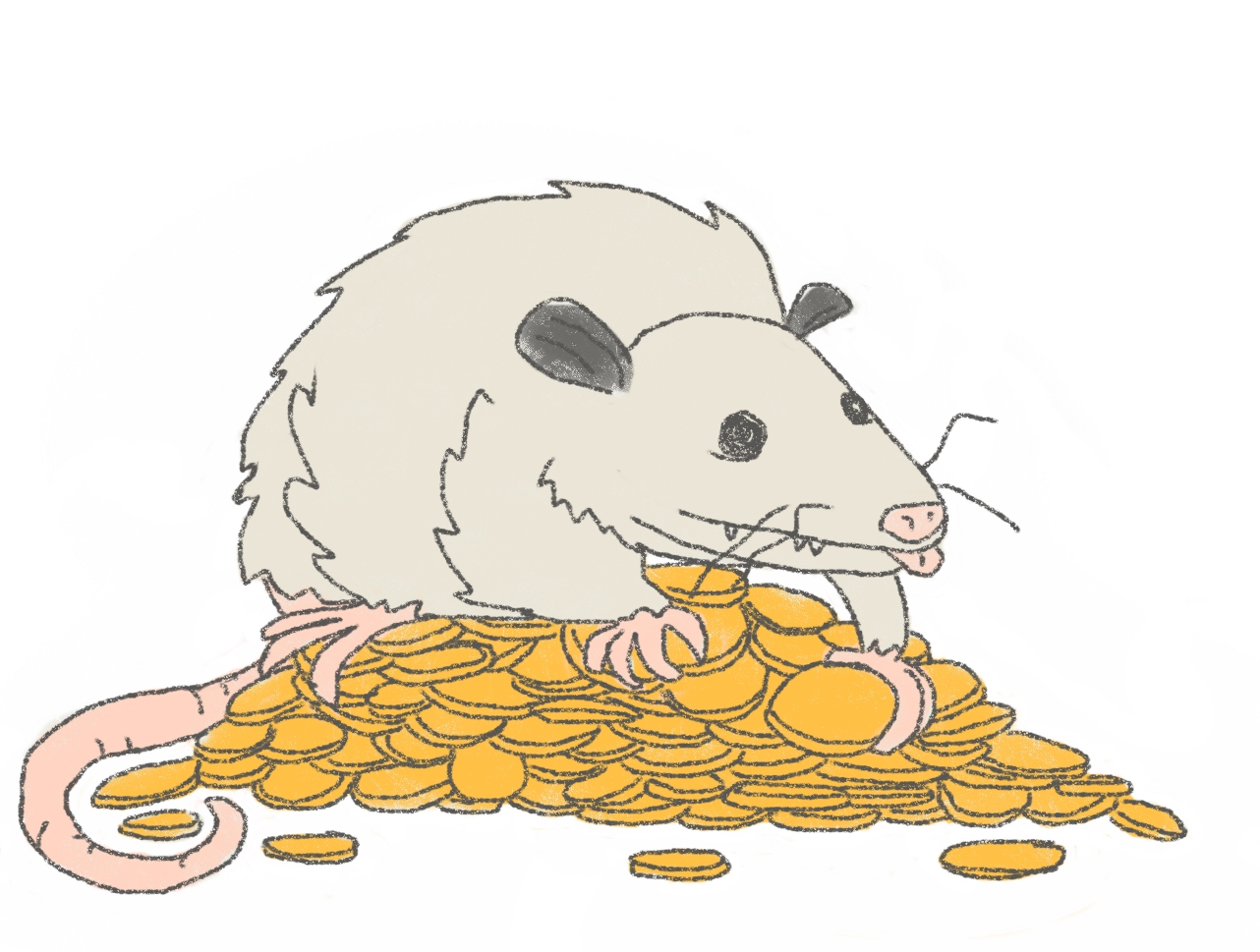 The possum guards his hoard of lucre jealously. Truly a fearsome foe.

Let’s talk about some changes!

CHANGE THE FIRST
So, as is readily available to pretty much anyone who has been here before, I’ve changed my blog theme. I was never completely fond of the prior stock theme and I finally overcame my fear of effort change yesterday evening and went and sifted through literally dozens of websites and hundreds of themes until I found this one at long last and promptly settled for it. I think the hipster, photo-heavy templates that are in common circulation would be a grievous disservice to this blog in its current state and so I’ve gone with something with a multi-purpose sort of look. The new layout includes links on the sidebar to blogs I like to read as well as a placeholder for downloads that I am sure will eventually be used by… something. Maybe I’ll collect all my roll tables in a pdf someday or something. Who knows. I’ve never made anything of value. But I swear, it will get used, and if you have any ideas for what else should be a link/standalone page/whatever, please let me know!

CHANGE THE SECOND
That’s not all that’s changing, though. I’m selling out! After discussing the affiliate linking program with Larry from the evergreen Follow Me, And Die! blog/podcast/social media empire and being assured it adds no cost to the buyer and takes not one red cent from the creator, I decided to speak with DriveThruRPG about signing up. I’ve since been activated by their very kind staff and I will be updating prior blog posts to contain affiliate links where applicable. There will also be a block of text at the bottom of the blog in the footer section declaring my involvement in such a program and its terms so that readers (who all probably know more about it than I do, frankly) can be aware of it even after this post has come and gone.

The reason for the affiliate links is to get rich as hell dump money back into the industry. Whatever few cents I get through affiliate links will eventually be cashed out in the form of zines, books, etc that I want to review here. Whatever I buy, I’ll be reviewing in depth. It’s like the circle of life, but with more dice-rolling and possum-based rating systems. So the gist is: click the affiliate links if you want to get whatever I am talking about, and in turn I will use that commission to get more stuff to talk about that you might also like, which will mean those pennies end up back in the creator’s pocket where they belong, so they can make more stuff we all want to buy and read and play.

CHANGE THE THIRD
The third big change is adding some social media stuff to the mix. I use Twitter, mostly, and this all started because I woke up one day and thought: I should make a Twitter about D&D. However, I’ve come to understand that G+ is where most of the OSR folks hang out and also that Facebook has its own uses as well. So I got another bright idea, said what the hell, and set up accounts all over the place. You can get to me via the buttons at the top of each page or by clicking these static links:

Twitter @dungeonspossums – ALL OF MY THOUGHTS GO HERE ALL THE TIME.
Google+ Dungeons and Possums – Similar to Twitter. Circle me, talk to me, let’s be pals.
Facebook Dungeons Possums – No idea whatsoever, I was just told a lot of people have it.
Instagram @dungeonsandpossums – All artwork, all the time.
Tumblr dungeonspossums – I’ll repost artwork here, link to blog posts, that kind of thing.

[The weird part is, back in 2011 until about 2015 I was a constant G+ user on my personal account. I was in the original beta and had thousands of folks in my circles and actually, in a roundabout way, met my eventual wife through G+ (sort of). I used G+ and Hangouts constantly, non-stop, through all the questionable UI changes. But around 2015, most of my closest friends migrated away from the platform and I had since married my wife and G+ sort of fell by the wayside for me. It’ll be interesting to start over!]

SUMMARY OF THESE CHANGES THREE
Anyway… Please reach out to me if you have any thoughts or concerns about these changes. I’m not set on any of them, but I think it’s an okay way to go. I don’t expect anything to change in my day-to-day interactions; I’ll still primarily be on Twitter, hopefully the new blog layout is a help and not a hindrance to readers, and affiliate links will make me miniscule amounts of money. It just seems like there’s a lot of OSR out there to meet and interact with and this is a good way to do it, and affiliate programs seems like a no-effort way to possibly add three or four cents per year towards buying zines and stuff for the site. Again – let me know if you feel otherwise. I value the input, and I am not married to this idea. If it’s garbage, then it’s gone. You tell me! Until then, I’m still gonna write too many blog posts and tweets and keep on going with whatever this whole thing is.