So you want to play a game of the old dice-roll beer-drink loot-grab, but you open your mouth to describe the first room and one of the players pulls a gun on you and shouts, “So help me, if you tell us it’s goblins one more time,” and now you’re sitting with your mouth half open staring at your notes wondering what the hell to do, because he’s probably not gonna be happy if you switch to kobolds, either.

It’s okay. It’s going to be okay. I’m here to help! Tell Walter Sobchak to put the pistol back in his bowling bag and grab his dice, because I have the answers for you! 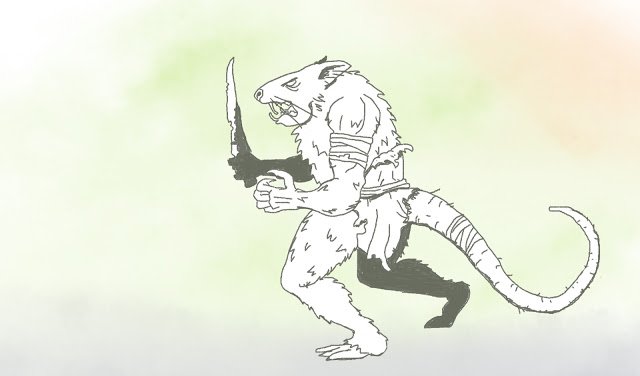 This was drawn entirely with a normal mouse in Autodesk Sketchbook, so cut me some slack. It is a mouse drawn with a mouse.

Straight up steal Skaven from Warhammer. You’re looking at remorseless, ruthless, skittering ratdudes who carry foul disease on behalf of a malevolent and cruel god and lurk in endless warrens beneath the soil and stone. They have every reason to accidentally or intentionally tunnel into a ruin or dungeon or cavern; they harbor great dislike for all other beings and will immediately engage in faction conflict. They are as spiteful as they are selfish, and will savagely kill anyone who displeases them with little use for unity except when outsiders must die. They are cowardly at times and will flee to regroup and ambush again and again if necessary. The Skaven are vile, putrid, disease-carrying murderers who relish the chance to kill others, and will throw a wrench into the dungeon ecology and factional balance instantly if they happen to claw their way in to an occupied place. If you’re lucky, your players will mistake them for other monsters, but if your players have any familiarity at all with Warhammer, they’ll inherently want to smash these rats.

These are pack animals and are always found in groups, never solo. Every group of 6+ has a spellcaster, who is blind.
Play them as cowardly tunnel ambushers with plenty of sudden holes opening up anywhere that isn’t solid stone. 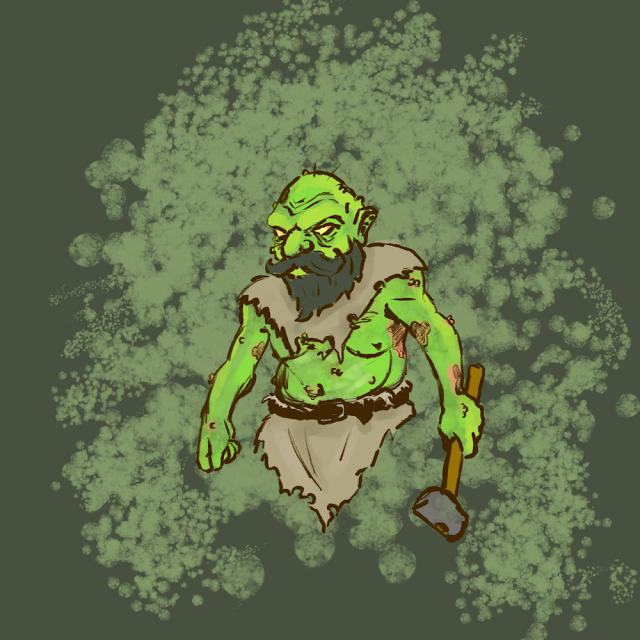 This is the first drawing from my new art tablet, so please forgive its many issues.

Blizzard stole half their base gimmicks for Warcraft from Warhammer*, so feel free to counter-steal the idea of infected, maddened gnomes, twisted by disease in mind and body. Maybe they ran afoul of a warlock. Maybe warpstones exist in your game. Maybe a lower godling cursed them to control them as its servitors. Maybe their own curiosity got the best of them somehow. Maybe they opened a trapped tomb while constructing a new home city and released the disease lingering on the corpses. There is always a reason to poison and mutate gnomes that can fit into your world. The plague gnomes wander aimlessly, half-heartedly doing the work they used to do before the infection, usually making errors along the way as they forget steps or details. They’re always twitching, hungry for a fight; their illnesses have driven them insane and violent impulses become the baseline response to everything. Be sure to include plenty of mutations; think of the slums from the Schwarzenegger movie Total Recall.

They are not quite solitary, but their short tempers and many maladies prevents them from forming large coherent units; however, they are very populous in the places they infest.
Play them as cunning but single-minded anger management prospects.

3. They Who Walk On Blades 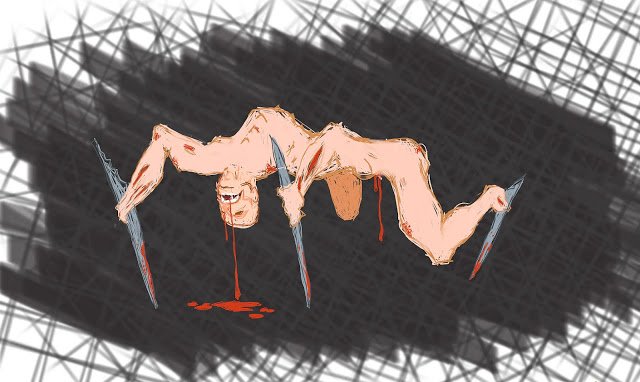 This was drawn at 0200 in bed on my cellphone with a stylus, so, again, a little forgiveness would be appreciated.

These abominations are the result of a magical prayer gone awry. Maybe the priest wasn’t pious enough to control the blessing, or perhaps it was an intentional blasphemy to sabotage the efforts of the kingdom to defend itself. Whatever it was, when a court tried to give blessings to their soldiers before battle, something twisted the words and meaning of the hymns and the men hoping to have their weapons become figurative extensions of themselves found some very literal consequences. Their bodies twisted and unwrapped and fused to metal, these creatures mindlessly stalk the halls, tapping out a metallic tink-tink-scrape as they go about their ceaseless vigil. They are unable to communicate, even with each other, and cannot hear or smell. The sounds of their steps grate on the psyche, like nails on a chalkboard or that certain sound a violin makes when the strings are abused by an amateur with a bow. The tink-tink-scrape sounds are individually distinctive; if you could survive long enough to observe them for awhile, you could get to the point where you could identify the approach of a specific abomination by sound alone.

They attack without thought and will swarm in packs but do not cooperate well or employ any tactics.
Play them as you might play a very fast zombie.

They Who Walk On Blades

I drew this guy in a brief period in my car on the same cellphone, but I really like him.

I know myconids are often lawful, at least according to our buddy Gygax, but why should they be? Look at that cordyceps stuff and tell me that isn’t bugnuts terrifying. It’s the worst. So now you have some stout fungal dudes running around in the dark, damp, moldy basements of the haunted keep. They obey a hive shroom. It grows along the floors like a thin carpet, bioluminescent and slick. The myconids make no noise as they walk and are usually armed with stone spears. The myconids do not speak. They communicate by gasping or belching clouds of glowing, phosphorescent spores in complex arrays of color that are discernable only to their own kind. Myconids from one hive will generally seek to overtake other myconid colonies aggressively, but have worked together when necessary.

They appear in packs of 1-10 and any group larger than 6 will have a humanoid thrall whose head bears telltale fungus fronds, who moves as if in rictus and is constantly wheezing like a winter wind; the thrall will respond to the spores but will always act last in initiative.
Play the myconids as silent stalkers which guard the hive shroom’s core stalk incredibly intensely. 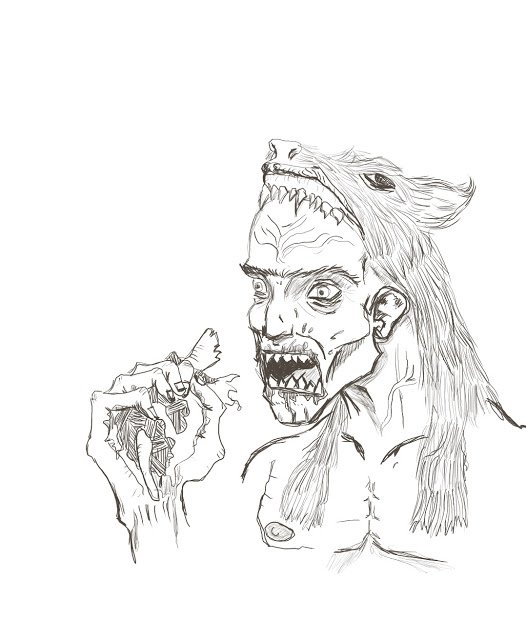 This guy was done on the cellphone over a lunch break at work. It got weird looks. Shout out to Bone Tomahawk.

Think Bone Tomahawk, or The 13th Warrior. Relicts dwelling in the dark, chanting songs that sound alien and terrifying to the human mind, sharpening their teeth with files made of rough stone, painting the walls in blood and ochre and obeying no law, adhering to no principles. No one is safe in their domain; not the other inhabitants, not their kinfolk, and certainly not you. They hunt. You hear their loping footfalls slapping the stone by the dozen as they stalk you by sound and smell. They bring brands to light their way, carrying the primitive torches as far as they can before the embers dim. They arm themselves with flint and obsidian, flaked to a razor edge, and they revel in the slow process of flaying their prey and eating their most nutritious organs raw, often still pulsing with life. You’re their prey.

Any time the players meet them in melee (1-8), there’s a smaller pack (1-4) that will come up from behind on the next round. Always.
Play them as cunning animals, a savage sort of intelligence that plays on the primal fear of mortal man.

The blocks above are, of course, formatted for Moldvay Basic/Cook Expert. Treasures in parentheses are for lairs, strongholds, or other locations where a hoard would be appropriate.

So there you go. Calm your table’s Walter down with the soothing sounds of Skaven in the walls, or throw some mushrooms at him. Maybe just drug his coffee. Throw some new monsters at your players as above. Whatever you do, get a metal detector for next week, because you shouldn’t be getting a pistol drawn on you over some goblins, dude.

Overall this article is a mess of various kinds of art; one picture was drawn using a mouse and a few were done with the stylus on my Note 8 cellphone; however, this article also marks the first appearance of art drawn with my new Huion H610 Pro V2 pen tablet (Amazon affiliate link). It’s the first time I’ve used such a tablet in a few years; my ancient Graphire 4 was rendered useless when WACOM decided not to support it on Windows 10 so I had to pick up a new tablet. Because of this, I have no earthly idea what I’m doing, so I hope you’ll stick with me and forgive some eye-bleeding artistic errors while I try to learn how to make pictures that don’t offend the human eye. Any tips, hit me up on Twitter @dungeonspossums and let me know!

* Please don’t be mad at me for the Blizzard joke. I play way too much Warcraft and Starcraft to feel bad for that joke. I’ve earned it. And it’s halfway true. Kinda.