Old school role-playing often makes use of hirelings, mercenaries, sellswords, and assorted other paid redshirts sent to certain doom in caverns dark and temples profane. The only reason B/X adventurers can keep a lawful alignment is that they believe they’re sure to be safe and successful in the Warmage’s Ziggurat of Despair – it’s only the player who knows that the poor randomly generated sap they offer some gold pieces to won’t be alive long enough to collect.
I figured it might be fun to offer up 1d6 mercenaries for use in your games, complete with art for handouts or what-have-you, and some character traits. If your players want to hire someone to visit the bottom of the Tomb of the Mad Lich with, roll on this table and get yourself an unfortunate wretch who doesn’t yet realize how screwed they are!
Below you’ll find stats, traits, and art for each of these sacrificial lambs mercenaries. Please forgive the art for these mercenaries. I did it with a mouse because it turns out my new Windows 10 install doesn’t support my ancient WACOM Graphire 4 from like 13 years ago. I’ll be acquiring a new drawing tablet shortly to try to fake my way through more digital art for the blog, but in the meantime please accept these stand-ins!
1. Huto – Halfling – AC 8 / 2HP – Neutral 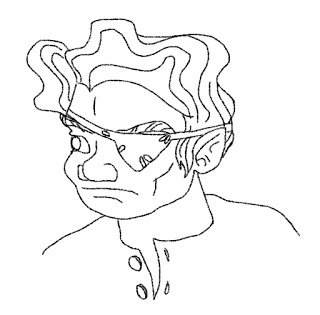 STR: 11 / DEX: 12 / CON: 8 / INT: 8 / WIS: 6 / CHA: 9
Spell: 14 / Wand: 11 / Death/Poison: 10 / Stone: 12 / Dragon: 13
Huto the halfling is a one-eyed veteran of several minor expeditions into dangerous uncharted territories with trade caravans. Though most of his journeys were uneventful, one did take his left eye, and he now wears a leather eyepatch. He bears a grudge against goblinoids as a result of his injury and will loudly proclaim that slings are for cowards too fearful to look a man in the eye. He does not see the irony of this. He is olive-complected and has sandy brown hair that could use a wash. He owns no armor, but does carry a buckler and a spear. He will fight as a hired man-at-arms for 3gp/day.
2. Elgrid – Shieldmaiden – AC 7 / 4HP – Neutral 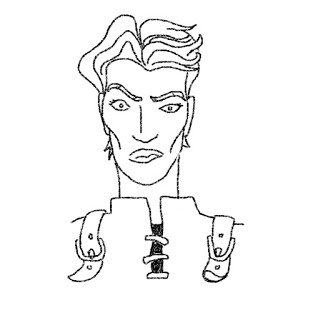 STR: 15 / DEX: 14 / CON: 10 / INT: 8 / WIS: 4 / CHA: 9
Spell: 16 / Wand: 13 / Death/Poison: 12 / Stone: 14 / Dragon: 15
Elgrid seeks fame and fortune on her own after he father refused to allow her to partake in her clan’s battles alongside the men. She is tall and muscular and has her hair cut very short. She wears leather armor and carries a shortsword and a shield, and is a skilled mender of rope and nets. She holds nobles in low regard and considers the majority of them to be cowards and vexatious tax barons; she will fight as a hired sword for 1gp/day but will charge anyone appearing to be wealthy or of an aristocratic or noble class an additional 1gp/day out of spite.
3. Delhoun – Torchbearer/Porter – AC 9 / 4HP – Lawful 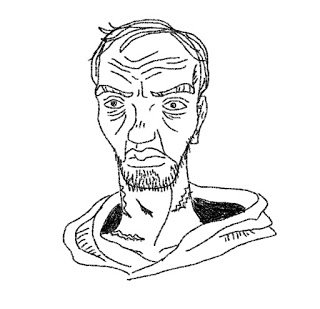 STR: 12 / DEX: 8 / CON: 11 / INT: 9 / WIS: 6 / CHA: 8
Spell: 17 / Wand: 15 / Death/Poison: 14 / Stone: 16 / Dragon: 17
Delhoun hails from the dunes of a distant desert land. He does not speak much about his past, but many scars around his wrists and neck tell enough of a story for him. He wears an awkward assortment of fabric scraps as scarves approximating the traditional garb of his people. His hair is thinning and his skin has begun to weather with the weight of a difficult life, though he remains extremely strong. He carries a small dirk. He is stoic in nearly all manner of ways and is afraid of little, but he does bear a specific loathing for slavers and will forego payment in exchange for his patrons freeing slaves or killing slavers. He charges 1gp/day as a porter and torchbearer.
4. Murak Greatanvil – Dwarf – AC 5 / 6HP – Lawful 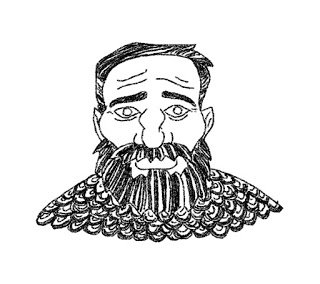 STR: 10 / DEX: 10 / CON: 16 / INT: 7 / WIS: 12 / CHA: 8
Spell: 14 / Wand: 11 / Death/Poison: 10 / Stone: 12 / Dragon: 13
Murak the dwarf gave up a life of comfort as a prestigious blacksmith carrying on the family name to seek adventure beyond the echoing chambers of his mountain home. He has largely found hardship since leaving the business behind and holds some regret. He is equipped very well, thanks to his former trade, and carries a helm, a solid shield, and a warhammer as well as a full set of chainmail. He is usually rather dour and grim, but enjoys carousing and will shout loud dwarven tales and anecdotes about being a famous smithy when drunk. He is stout and has a thick, salt-and-pepper beard and thinning hair. He will serve as a sellsword for 3gp/day.
5. Sedra – Cleric – AC 5 / 5HP – Lawful 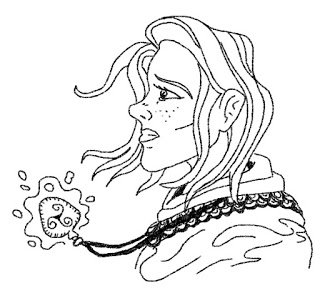 STR: 8 / DEX: 10 / CON: 11 / INT: 11 / WIS: 16 / CHA: 11
Spell: 15 / Wand: 12 / Death/Poison: 11 / Stone: 14 / Dragon: 16
Sedra is the sole survivor of the infamous sacking of a remote church. Her faith was only strengthened by her miraculous survival, and she is not shy with this fact. She is quick to share the word of her god with any who will listen. She carries basic aid equipment including one dose of antidote for routine poisons. She has a chain shirt in poor repair and a rusted mace. She is small in stature, and dresses in the travel robes of the faithful beneath her armor. When not employed, she ministers to the lame and poor, and will collect alms for their medicine. Sedra can cast Purify Food and Water and Protection From Evil as a second level cleric, however, these are the only spells she can pray for and she cannot progress further in her divine studies due to her clerical order being decimated and her abbey being many weeks’ journey away. She will work at a rate of 5gp/day.
6. Aethil – Elf – AC 7 / 4HP – Neutral 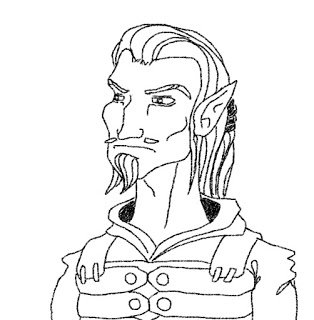 STR: 10 / DEX: 10 / CON: 8 / INT: 13  / WIS: 13 / CHA: 6
Spell: 15 / Wand: 13 / Death/Poison: 12 / Stone: 13 / Dragon: 15
Aethil is an elf on a journey to uncover lost knowledge and secret lore, so that he might someday become a proper disciple of a grand mage. To make ends meet – and to make it more likely that he find his way down into the various ruins where such treasures lurk (and, hopefully, back out again) – he has taken on work as a guard and as a porter. He is equipped with leather armor and a dagger, as well as an iron lantern. He is not likely to take serious risks unless suitably compensated with his preferred reward: magical scrolls, tomes, rods, and wands. He will attempt to weasel his way into possession of any magical scrolls or tomes found, in the belief that these will convey sorcerous secrets unto him. He will serve as a porter or torchbearer for 2gp/day or as a fighter for 3gp/day; the contract must be decided in advance.
Well, those are your six random mercenaries – the next time your players want to hire a sellsword, or a player is going to miss a game, or your B/X open table game needs more NPCs to add to the megadungeon’s death tally, just roll 1d6 on this table and send that poor jerk to his or her doom! And please do let me know if you use any of these characters in your game, and how they inevitably died horrifically. I’d really love to know.