This summer, I caught wind of a little project for the month of July via a timely thread on r/dnd – the #SummerKnightsDraw prompt. This is a pool of themes for daily drawing and I felt liked it’d be a good chance to get back into the swing of drawing regularly. I’m no Picasso, but it’s always been a favorite way to express my imagination, and since D&D (and other RPGs) has always made my imagination go wild, the two go hand-in-hand with me. Also, I have always been partial to pencil, pen, and paper – especially for D&D. I own a lot of PDFs and electronics and stuff, like any normal human in 2018, but deep down, only pencil and paper count – so these are my tools for this event.

We’re five days in, so I’ve posted five drawings thus far. I figure I’ll post them up in batches here, to outflank the emphemeral nature of Twitter and, to a lesser extent, Reddit. As a bonus, I can add a few notes in that I lack the character counts for elsewhere on the internet. Without further ado, the first five: 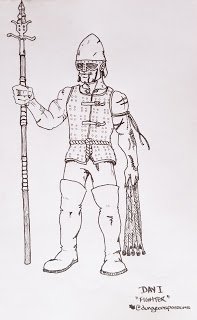 Like most D&D nerds, especially old school ones, I love history. A lot of people criticize the old polearm lists, in good fun, but as a kid I loved them. I did Gary Gygax proud by arming this fighter with a spontoon and net. There’s also the issue of the maligned, mis-communicated “studded armor” – a coat of brigandine goes a long way here to clear up the confusion. I chose a half-orc because I figured everyone would do a human, and I scarred him up with cuts and burns and a damaged helm to add a veteran look to him.
Day 2 – Slime 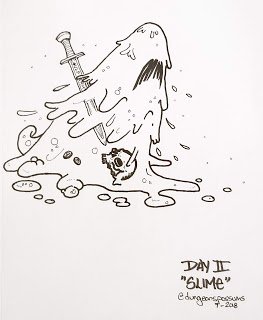 This marks the day a set of knockoff Copic fineliners and knockoff Kuretake brush pens showed up in the mail from Amazon. I’d wanted to give proper pens a try and since the UniPins I wanted were sold out on Prime at the time, I settled for a temporary fix. I’ve never used brushes or fine pigment liners before. As a kid I only drew in pencil, and as an adult I’ve mostly been pressed for time (leading to my Twitter #workdoodle gimmick) so they often begin and end nowadays as pen drawings from a G2 or a similar roller pen from Staples. This project is going to be pencils, then inks, like a big kid! It’s an exciting, ongoing experiment. Bonus points: Ulfberht sword for the history nerds.
Day 3 – Undead (Allip) 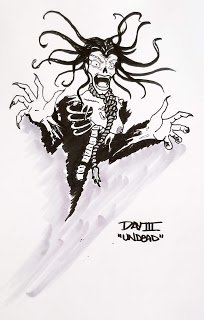 The Allip is one of the only “modern” (post-2E) WotC monsters I immediately loved. I found it instantly alluring and off-putting. The Allip is the wraith-like spirit of the insane, driven mad enough to take their own lives. The Allip is so insane, however, that their torment does not end with death, and they remain a wailing, babbling monster in the ghostly realm. They attack Wisdom scores, they are incorporeal, and their mutterings are hypnotic to those anywhere nearby. This is the day that I picked up two Prismacolor greyscale alcohol markers (similar to Copic markers) to try my hand at shading. I’ve never, ever been one for coloring, so this is by far the most experimental part of this month’s grand adventure.
Day 4 – Alchemy 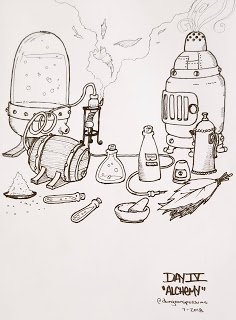 I struggled with this one because, though I focus heavily on drawing random weapons and items, I felt unprepared for what alchemy entails. It doesn’t enchant my imagination like axes and armor and scrolls and coins. I made it up entirely as I went along; I have no idea what half of it is supposed to be and to be honest by the end it looked a lot like an opium den.
Day 5 – Elemental 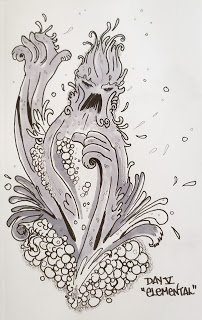 Initially I had no idea what I was gonna do here and it really just evolved layer by layer as I put pencils in. Since I’m used to harder shapes like swords and spears, I found these curvy blob shapes to be challenging and fun. This is also the first real effort with the Prismacolor markers and, to be honest, I’m pretty pleased with the results. I look forward to using them more as I go through this monthly prompt game.
I’ll continue posting these each day on the subreddit and on Twitter, where I can be found as @dungeonspossums. Drop me a line there if you have any ideas for musings or tangents that, for some reason, you’d like my take on in the form of a blog article. I have a book of random tables I jotted down during work breaks over a year ago and I think a couple of them could make decent posts.
See you in five more days for the next batch of six through ten, and maybe sooner if I can make myself type another wall of text on my cellphone before that date!