It’s been a few days, so it’s time to catch up on the last couple of my submissions to the SummerKnightsDraw prompt event. I’ve been sort of increasing the complexity, or at least the degree of time I’ve put into parts, most days. Some prompts are very straightforward and simple, and the drawings follow suit, but I’ve tried to experiment more and more, one way or another, as I go on – poses I’ve never drawn before, or more attention to shadow, or more detail. 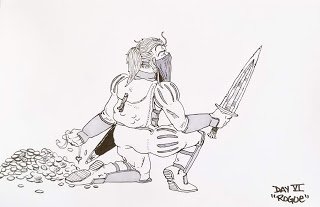 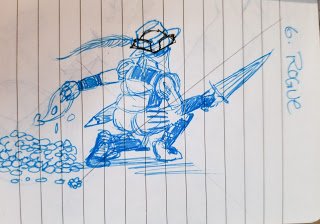 I’m gonna come clean here: some of these I drew well in advance of their official publishing date, and inked and such, so I’d have them ready to go ahead of time regardless of what my work schedule or real life had in store for me. Before I ever posted the first one, I was about nine drawings in to the list. But I drew Day 6’s Rogue well out of order. I think it was like the 13th or 14th drawing I actually did, because for a week or two I had no idea whatsoever what to draw. And that’s why it has a thumbnail sketch I did in a tiny notebook at work; I didn’t start thumbnailing these out ahead of time until #10, but I hadn’t cooked up a Rogue plan by then so I had to go back. My wife wisely suggested I give up the various hats I was trying out, and my weird need for occasional historical references caused me to arm him with a cinquedea.
Day 7 – Sorcerer 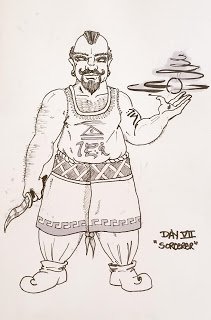 This was where I learned a valuable lesson: after inking a few images in a batch, I went back and applied the Prismacolor grey markers to them in reverse order, leading to a previous drawing bleeding all over my finished sorcerer. Now I use separating sheets to avoid this issue, but it still sucks. He looked clean before that. I may try to fix him up when I get my PC back up and running and can play with photoshop again. I was inspired to make a sorcerer I didn’t expect others to draw, so I figured a dwarf who abandoned hearth and home to wander the dunes and desert cities in pursuit of power would be pretty uncommon. This is also my first go-round adding some interest to clothing, with patterns and such. Also, he looks like a fat dwarven Sean Connery for some reason. Probably the facial hair?
Day 8 – Underdark 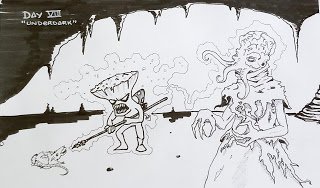 The Underdark, to me, is an amazing place. I know he’s a cliche these days, but when I was young and the Forgotten Realms were still new, Drizzt’s original solo novel trilogy was the first look I got at the Underdark in long-form outside of modules. The Q and D module series brought us to the Underdark first, but at least in my experience, those novels were the first thing to turn it from “caves” to “brilliant, busy, colorful, deadly, amazing cavernous world-within-the-world.” I was immensely taken by prose describing a pitch black world as a brilliant rainbow pallet of infravision; by prose of myconid societies and the massive cities and politics of the drow; by prose about the strange and alien and immensely dangerous creatures below the surface of the world. I wanted to try to do some justice to that, by leaving more “light” than you’d expect, and drawing two big facets of the Underdark – and the food chain continuing to roll downhill from there.
Day 9 – Barbarian 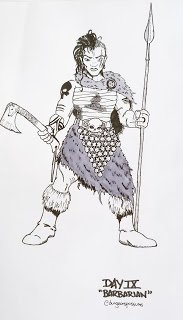 I can’t draw women. I have little practice drawing them, because frankly I have little practice drawing most things! I wanted to draw a woman who really captured the barbarian aesthetic, though – so we have scars, mismatched armor bits, tattoos, a wild haircut, strong musculature, powerful hands, and animal and skull decor all over the place. I’m really happy with how she turned out. She is amongst my most favorite of all the drawings so far. She also has the first try (for me) at a trick with the prismacolor markers on her furs, to add depth to the shade. I like it. I will do it again at some point, I think.
Day 10 – Minion 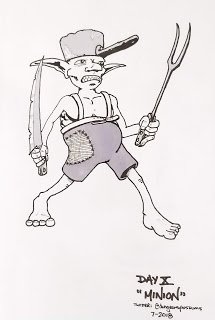 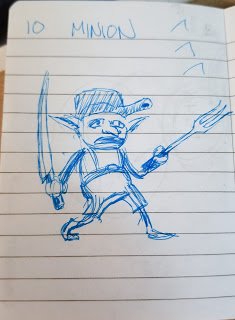 Pottsy is the head minion, because he is the only goblin to brave a human house alone and come back with a pot, a knife, and a fork – and because he still has all of his teeth, which counts for a lot in a biting-derived hierarchy. He is the first drawing I did after the initial “ahead of time” batch of nine drawings (Day 22 replaced Day 6 in that batch, believe it or not), and therefore was the first to be thumbnailed in a tiny notebook at work. I figured that I was less likely to have the Oh God, What Do I Do With This Big White Paper disease later if I thumbnailed a rough scribble ahead of time. Some of the thumbnails I actually like more than the drawings that came after. Some, I did much more on the real drawing than the thumbnail, and it turned out better for it. We’ll get to see a lot more of these going forward, in the next batch!

That’s all for the 6-10 batch, though we’re only a few days away from the 11-15 now, since I am late getting this collection up, so I guess I’ll see you all around pretty soon for that post. Until then, thanks for checking out my blog – come say hi on Twitter if you’re in the mood to chat, and check out the #SummerKnightsDraw hashtag there if the official subreddit isn’t your thing. See you around!