We’re already just about on the end of the month already, so this might be my most behind-the-times recap post yet! This time around we’re gonna cover days 21 through 25 of the D&D art prompt I’ve been working on all month long so far. If you haven’t kept up to date with these, you can catch the previous batches here:

The month is nearly over, and as long as I can make it just a few more days, this will mark the first time I’ve ever done a daily online prompt event like this – let alone done one successfully. As you may recall from prior updates, I started out doing this event with a week or so advantage of art prepared in advance; slowly it dwindled but my output kept me a few days ahead at a time… but sometime last week I ran into a lot of stuff I had to do in the real world and now I’ve had to start drawing and inking the next day’s artwork on the evening before – so most of these, though thumbnailed weeks ago, were drawn right before posting. 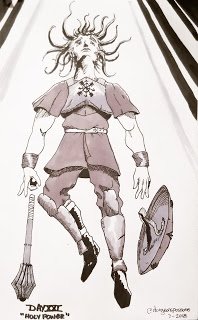 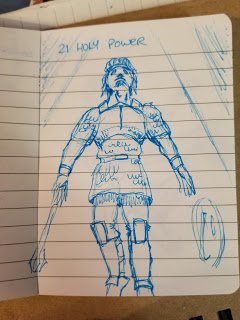 When I saw the prompt called “Holy Power” while deciding whether or not to participate in this event, I immediately had the image of a cleric being literally lifted up into the bright embrace of his god. It was easy to thumbnail and I was excited all month to finally get to draw the full art for it. As I have mentioned, I have been using this prompt series to experiment and try to get in practice at “something new” with nearly every piece, even if it’s something really minor, to try to challenge myself. For this piece it was to work on metal shine/color grades and the anatomy of someone looking upwards. I don’t think I exactly nailed it, but I am pleased nonetheless!
Day 22 – Demon 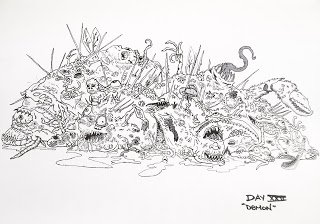 Back-to-back with “Holy Power” is the other side of the coin: a demon. I drew this as the second or third drawing ever for this series – way back in June, before the event even began. This is a razordemon, which is a recurring homebrew monster in old AD&D games I had years and years ago. These are misshapen, mutated, failed demons which are “farmed” by other demons and encouraged to bloat and mutate further and further so their various natural weapons – scythes, spikes, teeth – can be forcibly harvested for use by demonic armies. They are functionally immortal and lead eternal existences of agonized immobility, their cancerous body parts torn from their pestilent flesh while they wail from dozens or hundreds of mouths and watch from thousands of eyes. I knew most participants to the SummerKnightsDraw prompt would draw, y’know, normal people demons, but I haven’t drawn this beast since the ’90s probably and wanted a crack at it.
Day 23 – Bard 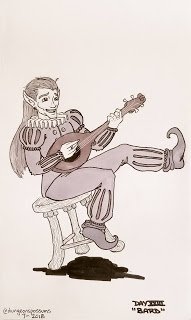 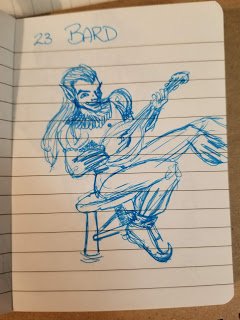 The bard is a pretty huge change of pace from the monstrosity known as the razordemon. I wanted to capture a few things for my experimentation on this one – finer hand positions than I normally draw, for the strumming and strings, and a more joyous and playful facial expression than you’d get by doodling most warriors and stuff like that. I figured I’d have him rocking out so hard his stool would tip over. The thumbnail sketch, done in like a minute, didn’t have enough room to finish out his legs correctly and he had a more conspiratorial grin; I ended up going for a more open expression from my elf in the end.
Day 24 – Blacksmith 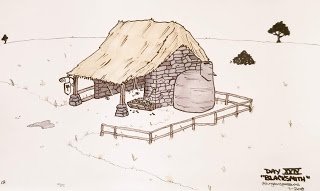 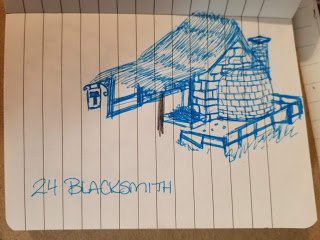 This prompt obviously expected an actual smith, but I realized I hadn’t had much chance to draw buildings or scenery so far, so I decided to go with that instead. In my thumbnail I actually forgot a post and added it in with pencil at a later date. On the final piece I wanted the fence to look a little more “open” and offer more space, but I think it also kind of gives off the sense that the front corner being more open than 90-degrees was a mistake (which it was not) and I am not sure how I would better convey that it was intentional to create a less-uniform yard with more space for coal deliveries and such. I am not super happy with it, but I am happy with the rest of the building and the colors I got to use from my extremely limited palette of marker pens.
Day 25 – Forest 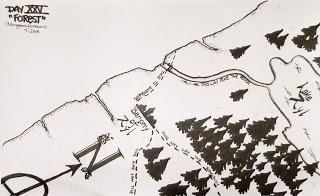 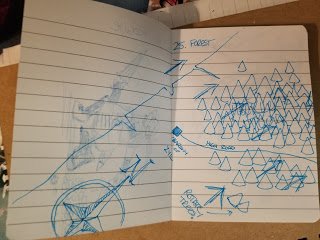 The last day of this batch asks for a forest. If you look closely at the thumbnail art, and you remember the prior posts where I mentioned that the rogue from Day 6 was actually drawn really late and out of order and thumbnailed even later, which should give you an idea of how late the thumbnail for this one was. I didn’t want to draw another scene so soon after the previous prompt, so I decided to again branch out and experiment with a map. In the thumbnail I drew the outline and compass rose right away but then came back a few hours later on a break at work and drew in the trees, which ended with me forgetting what direction the map was angled – so I left myself a lot of big arrows and notes to remind Future Me to do it right on the final piece. I am actually super pleased with the details on the final piece – especially since I did everything on this drawing (except the text) with the brush pens in my pen set, and the north symbol was done with the 3mm chisel tip I never use!

This month is nearing its close. I will do 26-30 in the next batch and then the grand finale will be the 31st and a retrospective of sorts on what I liked, what I learned, and that kinda thing. I am excited to wrap this all up!