We’re back at it with another one of these recap posts, looking at the latest batch of my contributions to the SummerKnightsDraw art prompt from r/summerknightsdraw

A lot of Twitter folks in the RPG community are involved in this as well, and most of them post in both the subreddit and on Twitter. I am in good company there. Feel free to take a look at the subreddit or the hashtag and maybe follow the artists you like to give them a bit of encouragement; taking part in something like this for the first time has shown me what an interesting commitment it is as far as regular creativity on a schedule! My hat is off to all the hardworking artists of the world. 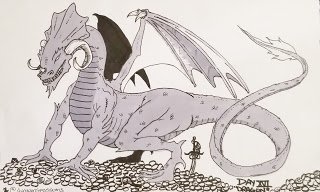 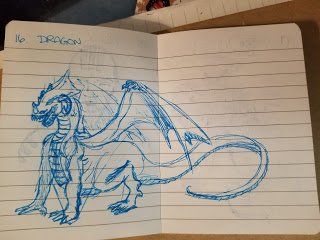 The titular foe of the game everyone knows and loves, the dragon was a kind of intimidating prompt for me because it’s such a famous and beloved part of the roleplaying milieu. The final dragon I drew didn’t deviate too much from the thumbnail in principle, though strangely, when I worked on the big drawing, I ended up with some weird proportions that ended up necessitating half the pencils get redone. I found it hard to keep the elements of her body in the right scale. I had to include a lot of treasure, of course, because how could we not pay homage to Smaug in some small way?
Day 17 – Spirit 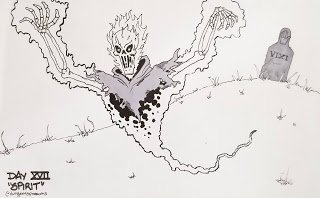 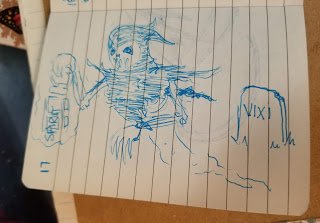 This prompt was actually really tough for me because I had no idea what the heck to do for a spirit that I hadn’t covered with the Allip (#3). I didn’t get too far with that plan, because it turns out that I only have one type of ghost I draw. I went a little Kirby on the incorporeal form of the monster here. A lot of artists went with less sinister designs. I would probably do the same if I did this again, but honestly – once I drew the VIXI tombstone in the thumbnail I was kind of married to this one. For those not aware, Roman grave markers often contained VIXI and VIXIT (“lived”) and an age counter, followed by the name of the party who erected the grave site and commissioned or fashioned the marker. Yet more of my weird history nerd stuff bleeding into D&D.
Day 18 – Witch 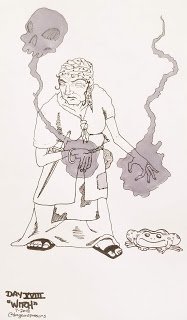 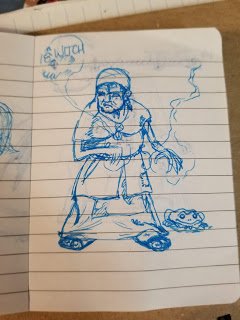 My witch is one of the pieces I am most pleased with. I think she really turned out swell. In fact, I think the thumbnail was pretty good to start. I couldn’t pass up an opportunity to have a frog familiar; I love frogs and I love the fairytale factor of a froggy familiar. Clearly he was a prince. I named her Gatha the Clever as I drew her, and I figured she must be some kind of local legend; something about her spooky hex floating up from her hands and the no-nonsense attitude of her face spoke to me and said “not to be messed with.” I like to think she’s actually a fine lady, just doesn’t brook fools lightly and refuses to suffer the indignities of civil living, so she takes to a hut out in the woods somewhere and makes familiars out of princes who come asking for advice or divinations but refuse to pay the price when she delivers her end of the bargain. I wanted to add a lot of little details to her, so I gave her some jewelry, including a crow-skull earring, and I put a flower pattern to her headscarf.
Day 19 – Dwarf 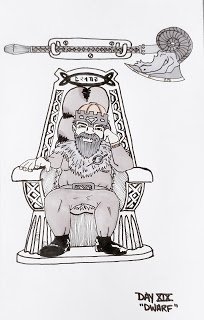 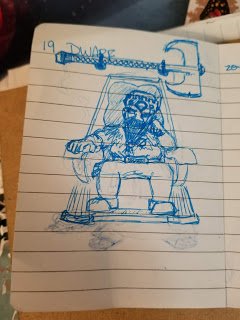 Another absolutely key component of D&D for most of us is the dwarf. Some of us still play rulesets that consider it as much a class unto itself as a race! When I went to doodle the thumbnail sketch for this guy, I realized I’d already drawn some warrior types lately, I’d drawn a lot of standing folks, and I’d definitely be drawing some more. So I wanted to try some kind of new experiment, since I am doing this daily prompt event as much for the learning experience as anything else, and I went with a seated figure. It quickly evolved from “sitting dwarf” to “dwarf king” and now we have the bored king wistfully remembering the days when his axe cut goblins in twain in years past, before courtly life took hold of him completely. To be totally honest, I had gone out and bought a couple more marker colors because they were on insane sale ($1.24 a pop rather than $6.99 each; I bought one of every color they had left, which was few indeed!) and tried them out here – and kind of regretted it. I have become so used to having just two shades of grey and then the black and white of my lines and page that I felt like I’d overdone it. Might just take some getting used to. His throne has WotC’s runic script transliterating the English word “REIGN” into dwarven, and I added quite a few details not present in the thumbnail just to make it feel a little more complete and regal without getting too frilly.
Day 20 – Weapon Master 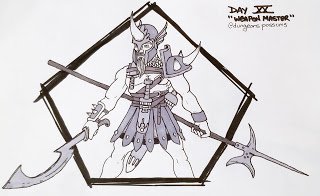 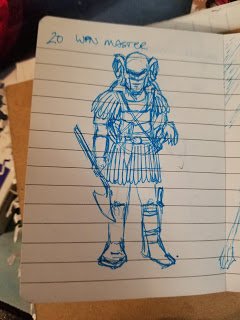 This piece was a huge deviation. When I thumbnailed him I did so mostly just to come up with a placeholder idea that would inform whatever I ended up doing, as I was thumbnailing about two or three weeks ahead of time by this point. All I knew then was that I wanted a sorta Greco-Roman feel to some aspects of him, and I wanted him to seem accomplished. When I went to draw him, I decided he was way too static and I wanted to experiment more. I tried a few things, different poses and points of view, before I settled on what you see above. I swapped his axe for a shotel to make him more clearly an exotic weapons specialist, and then I gave him a halberd so he could be visibly capable of wielding a two-handed weapon as a single-handed item and because the halberd is the coolest thing in melee history. I ended up going a little more “fantasy” on his gear than the segmentata sort of thing I had him wearing in the thumbnail, but the big experiment here was to do some kind of weird, sketchy border and try to balance what stuck out of it and what stayed in within the boundaries to give a sense of interest and dynamism to a still figure. In the end, I kept the Roman gladius and pugio because I gotta. I just gotta.
That’s a wrap on days 16-20, folks. Thanks for indulging me again and coming to read what I was thinking as I went through this process. I think I am learning as I go on these drawings, which is a good feeling, and I am also speeding it up as I go, which is a cool plus as well. I think confidence in lines plays a big part in that, because I am not as afraid to draw lines and longer lines as I once was. Practice counts!
I’ll be back in a few days with prompts 21-25, but for now, feel free to leave a comment below if you have any thoughts on these entries or the SummerKnightsDraw prompt event in general. And, of course, come find me on Twitter where I tweet entirely too much as @dungeonspossums