It’s time to recap some more of my submissions to the SummerKnightsDraw prompt event, since we’ve wrapped up another five days of this month-long series. Doodling these has been valuable to me because, though I used to draw a lot when I was younger (never seriously, mind you) I have not done so consistently in more than a decade or so – and I am seriously out of practice. I feel like I knew what I was doing more as a 12 year old in the 90s than I do now. It’s been good to practice different shapes and try to learn again as I go, and for that reason, these recap posts give me a sort of window into the day-by-day choices and mistakes I make along the way. 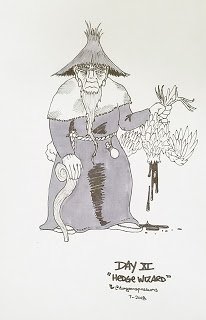 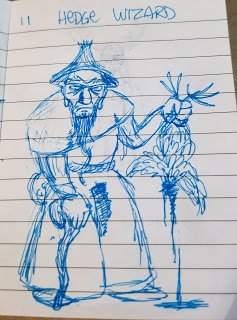 A hedge wizard, for those not in the know (which I assume must be a vanishingly small percentage of the audience of this blog) is an informal sort of magic-user, so named because of their general isolation to the fringes, or hedges, of a populace. Often hermits using wisdom and sorcery passed on through generations of practitioners handling various low-grade spells, the hedge wizard’s methods are unorthodox. This was my second thumbnailed drawing and I was very fond of what happened on the sketch; as you can see, I changed very little between the thumbnail and the final drawing.
Day 12 – Druid 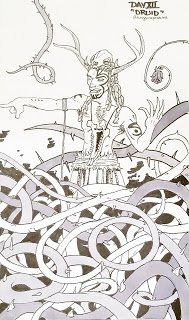 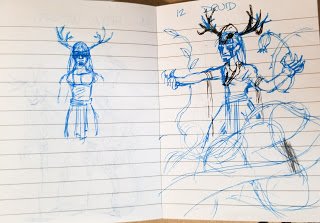 I prefer my druids to be feral, savage types, whose connection to the natural world and the spirits of the wild bring them closer to beast than man. I once played one whose weapon was “sharp rock”. I also like the learned sage/judge/priest type identified in the actual Welsh/British/Celtic legends and lore, as evidenced by my post of “civilized” druid treasures and artifacts, but this time around I wanted a druid capable of throwing a tidal wave of thorny vines into the chest cavities of those who dare despoil his sacred grove. As you can tell from the thumbnail, it took a few revisions to figure out what the hell I was going to do with my druid! I had to revise the antlers repeatedly (and then again six or seven times on the pencil sketch for the final piece) because I had never drawn antlers before and they’re unexpectedly complex in their own way. My first thumbnail revision (always in the black ink) added the badger skull and the jawbone of an ass for some biblical flavor, as well as the bead decor. The final drawing changed up the tattoos a lot.
Day 13 – Golem 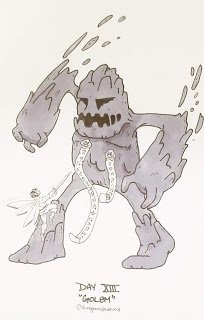 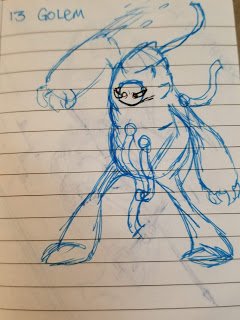 I considered various constructs in the looser, fantasy sense of the word, and then I considered a flesh golem a la Frankenstein’s monster. But when I started the thumbnail I pretty quickly evolved from metal guardian or flesh abomination to the classic Jewish legend. There’s no escaping that simple clay man. I love the Golem of Prague in particular for really exemplifying the positive side of the lore, rather than the common “beast-out-of-control” tale often woven about the classic golem. I wanted to make mine less static than clay usually is, though, and so I needed a reason to add some motion to my guy – a taunting pixie adventurer seemed right. Kind of like you or I swatting at a pesky mosquito and never succeeding… You just know that little winged jerk is laughing, pokey bit drawn and waiting to poke us again. For this drawing my big struggle was with the face. The first shot had him with just a big giant eye, like the old Mega Man games; the second revision had two eyes; and then the third had four! But in the end I went with a much simpler sort of mug for this dude.
Day 14 – Dungeoneer 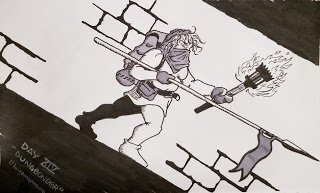 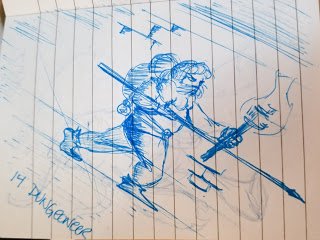 My dungeoneer is really just a picture for my wife. Being from The South (where I now reside with her), she had never seen snow until she came to my home country and I took her up the mountains of my city to show her. She is a gigantic dork for winter, and snow, like only someone who has never lived through six months of blizzards and days where the sunlight is present like six hours of the day can be. Because of this, I wanted to draw a lady all bundled up in cold weather clothes on an adventure, and this was the first chance that sprung out at me for that besides the Barbarian on Day 9. I didn’t change too much between sketch and final work for this one; I was happy with it. I think this is one of the strongest pieces so far.
Day 15 – Monk 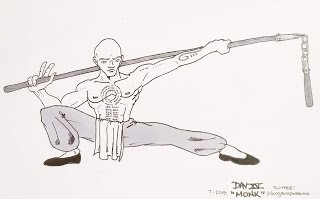 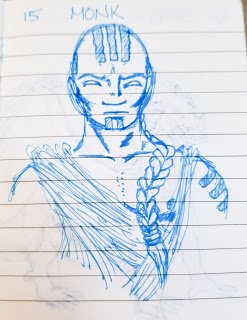 Trappist monks, friars, and their assorted brethren are cool as hell. For my tastes, the ki-channeling kung fu type aren’t my preferred style of D&D character. I love martial arts movies and grew up surrounded by them, but some part of my brain resists “kitchen sink” sort of stuff and the monk, as commonly depicted, is part of that. Because of this, I had no earthly idea whatsoever what to draw. The thumbnail is not remotely representative of what I went with. My family called the sketch “Airbender” and I had to agree. I had no plan going into any stage of this, because I lacked inspiration, I suppose, and I think it shows. Really, the only part of it that I like is the chest tattoo. I feel like it is suitably symbolic to have a ring of text atop some kind of scripture below. Sort of resembles a human shape in an abstract kind of way.

Well, that’s all there is for this batch! I gotta admit, the more I write these blog posts, the better I am getting at doing so in a reasonable timeframe. It’s not bad for someone typing all of this on a cellphone.

I’ll be back in a few days with prompts 16-20, but in the meantime, have a look around at the rest of the blog and drop me a line here or on Twitter if there’s anything you want to chat about!