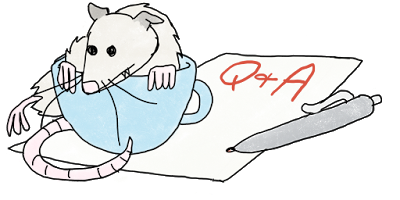 Well, I gotta say, I didn’t think I’d get to do this kind of thing, or at least not so early in this blog project. But, thanks to the kindness of Jeff Rients, here we are! He graciously accepted the rambling invitations of a weirdo from Twitter a week or so ago, and gave me a chunk of his afternoon this week to answer a few questions I had about Broodmother Skyfortress, his upcoming projects, and more. I’ve been sitting on this interview (and others) since then because my original game plan – to post this interview after the Broodmother Skyfortress review – was interrupted by the 2018 ENnies voting period coming to a close, necessitating my Frostbitten and Mutilated review being put up earlier than I’d intended and pushing everything else back. I am so glad to finally get to post this, though!

Without further ado, I’m going to let somebody interesting talk around here for a change!

You wrote Broodmother Skyfortress for a 2016 publication date. If you can recall that far back, what was inspiring you at the time you wrote it?

I’m afraid Broodmother was supposed to come out in 2013.  It went through a period of what I’m told software people call “development hell.”  First I was a little late with the manuscript.  Then the first artist assigned to the book–a great guy who I still respect–fell behind due to injuring his drawing hand.  Then the first layout was wrong for the book.  Neither Raggi nor I liked it but for a while we each thought the other did.  The second layout job and second set of internal illo really hit the nail on the head.  I’m proud of what I wrote, but publishing a book is a team sport.  If the finished object (the book itself) is any good, it’s because of Ian Maclean’s art and Alex Mayo’s layout, Jez Gordon’s maps, Craig Judd’s editing and James Raggi’s leadership.

But to answer your question, I was thinking about some old D&D modules at the time.  The influence of the Against the Giants series is obvious, I think.  As much as I like Uncle Gary’s old adventures, G 1-2-3 always struck me as a little bit too much like orc lairs on steroids.  In Search of the Unknown and the Keep on the Borderlands were also on my mind.  In addition to being fun dungeon romps, they served as training grounds for newbie DMs.  The Keep taught me as much about DMing as my first rulebook.  So I had this notion that the Old School scene needed its own training module.  Then’s there’s the old Judges Guild adventure Under the Storm Giant’s Castle.  It is not maybe the best dungeon ever written, but the concept of tunnels riddling the cloud on which a giant’s castle sat stuck with me through the years. And then there’s the dream episode of Gilligan’s Island, where Gilligan is Jack and the Skipper is the Giant.  As a kid, I thought Nathan Hale as Skipper-Giant was absolutely terrifying.

Shark-elephants go down in history as one of the stranger giants in the RPG canon. At first glance they almost felt like you had an old copy of Gamma World laying around. With your home setting of Wessex being essentially a fantasy 1600s England, what made you go so “left field” with their design?

I do, in fact, often have old copies of Gamma World laying around, though lately I’m more into one of it’s spiritual successors, Mutant Future from Goblinoid Games.  The shark-elephants grew out of my conviction that the whole dang point of running a Serious Historical D&D Campaign is so that once in a while you can wreck the players’ expectations.  Kinda like what happens the first time you watch the ending of Ralph Bakshi’s film Wizards.  And although I am quite happy much of the time to work within the old tropes of D&D vis-a-vis traditional monsters, I wanted my giants to be so out there that the local dirt farmers and town drunks would offer wildly conflicting reports of what the heck was menacing the region.

The last third of Broodmother Skyfortress is somewhere between a newcomer’s introduction to the OSR and a house rule toolkit that I took to be a sampling to help referees have more enjoyable games – but also perhaps a sampling to help us get a sense for what your own game is like, so give us a better idea of how this adventure would play in its “home environment.” Could you speak on that a bit?

I don’t really think of my own campaign as the home environment of the Skyfortress.  It’s just sort of floating around the universe, until the right breeze blows it over your campaign and ruins everybody’s day.  The appendix, which contains a lot of my old blog posts (though several were edited for clarity, a few updated, and a couple sections are brand new material) was meant to do two things.  1) Act as a sort of bonus content for the book and maybe a small apology for the delay.  This was a crowdfunded text and a lot of good people paid real money and then waited patiently for a long time to get it.  Raggi thought those folks deserved some extra funtimes and I heartily agreed.  But 2) it’s also a demonstration of one way (just one way) of thinking about how DM’s can make the game their own.  Although it is very rewarding to hear from a fan once in a while that they are using something from the back of Broodmother (usually it’s the Carousing rules), my greatest wish is to inspire other people to take a wisp of an idea from there and do their own thing with it.  Make something new, or take my idea and make something better.  Either way, the hobby will be richer for it.

With the success of Broodmother Skyfortress, the reception to the latter chunk of the book, and the love for your own extensive blog, is there any chance of you writing an expanded, purpose-built “OSR DMG”?

That is not a thought that I have ever had.  It sounds like a daunting project and maybe one that shouldn’t be written by any one referee.

I’m clearly late to the review party, since you published Broodmother Skyfortress about two years ago now. I understand you have a new adventure coming out at GenCon 2018: Obscene Serpent Religion 2. What’s your short pitch on that?

“Snake demon ruins your favorite watering hole; you are murdered in your sleep.”  It’s an attempt to write a small adventure in the core aesthetic of Lamentations of the Flame Princess.  The setting is self-consciously Weird Horror Early Modern Europe, but not so much so that you couldn’t use it in a generic vanilla fantasy campaign.  In fact, it would probably work in Middle Earth, in a quiet corner of the Shire.  Like Broodmother, there’s a certain fascination with Keep on the Borderlands at work, though this time I was thinking more about the Keep itself rather than the DM advice.  Gilligan’s Island is a factor again (true story: I once ran a con game of Call of Cthulhu set on Gilligan’s Island.  Half-deep one cultists sunk the island.  At the end three castaways survived on a raft.  Mary Ann was insane, but no one else knew it, and she was holding an axe.) but another factor is the sitcom Cheers as well as a little bit of the old horror flick Lair of the White Worm (which is based one of Bram Stoker’s lesser known works, but the book didn’t have Amanda Donohoe in it).

On your blog, you mention being inspired by Cheers and Gilligan’s Island for Obscene Serpent Religion 2. I watched the art get produced live by Journeyman1029, and going by that alone, since I havent seen the text, I’m not certain I follow those inspirations.

Oh, dang.  I jumped the gun/repeated myself.  The Cheers and Gilligan influence the construction of the social milieu, rather than the key snake demony plot element.

You’ve undertaken a lot lately outside of the RPG industry; is that gonna put a damper on your output or is there still time in your schedule for even more Jeff Rients books on the horizon in 2018?

I promised my wife no more gaming projects until I finish my dissertation.  But the plan is to finish that this year.  But I have a gentlemen’s agreement with a couple publishers in place that could prove fruitful in 2019 or 2020.  Cross fingers.

Thank you very much for your time today, Jeff. Do you have anything else you’d like to say (or plug!) before I let you get back to doing big kid things?

If you like modern urban horror rpgs, support Zak Smith’s Demon City kickstarter!  (I may have a very short piece appearing in it.)

There we have it: Jeff Rients on Broodmother Skyfortress; his upcoming GenCon-exclusive module Obscene Serpent Religion 2; formative age nightmares caused by Gilligan’s Island; and what is yet to come from his pen.

This has been a ton of fun for me. Like I said, I didn’t expect to be in this position a few weeks after deciding to start a blog because some Twitter pals prodded me to follow my dreams (and die!). So Jeff, if you’re out there, thanks so much again for your time and generosity towards this tiny corner of the internet – it was a pleasure to chat with you, and it’s an honor to have your words here as my very first interview to shamelessly milk for pageviews. I am sincerely glad you’re the first published luminary to pop on by, and you’re welcome back on this blog any time!

For everyone out there reading this: hopefully you liked this visit by Jeff. If you did, please make sure you follow Mr. Rients on Twitter, and check out his perennially popular RPG blog for his thoughts, announcements, and gaming contributions.