It’s time to dig through one of the tiny notebooks I have filled with random half-formed thoughts and roll tables and doodles, and pick out a new project to share with everyone. This time around, that’s gonna be a treasure roll table tailored around a druid grove.

Maybe you stumble upon an ancient, forgotten ritual site. Maybe you find yourself in the center of an active druid cult. Maybe you find the ruins of a once-vibrant pagan society in the aftermath of an evil raiding party. No matter how you’re coming across druid treasures, you can roll on this chart to figure out what your PCs find. There are mundane pieces, artisan valuables, and even some magical items herein. 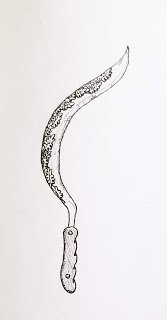 A beautiful artifact of a past age, central to many druidic traditions, the sickle is used in numerous rituals and reverential activities. This bronze blade features intaglio engravings along both sides of the spine in the pattern of oakleaf clusters. It features a smoothed oak handle with gentle swells and valleys for the fingers. Holding it feels extremely natural and great care was taken in its construction. Damage as dagger. 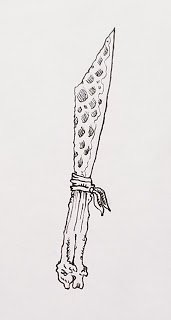 Druids are the keepers of nature and the wise folk who see between the veils of this world and that of the fey and their darker cousins. The druids protect their people as they protect their glades, forests, and glens. The wild places they venture are often more dangerous for them – the creatures that exist beyond the veil are not fond of being known to mortals. Some druids keep cold iron on hand, then; while it handles daily tasks and ritual needs as well as anything else, its true utility lay in the sting it holds for those fey and twisted creatures that mean the world of man harm. Damage as +1 dagger, deals additional 1d4 damage to fey and related creatures. 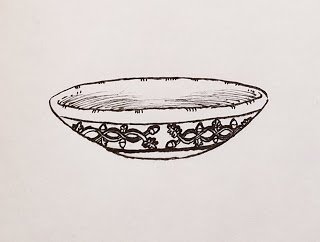 There are many elements to the druidic tradition. While some druids are so wild themselves as to border on bestial, some are the keepers of law and order and ceremony for their people. Many types of ritual and ceremony exist, but they often share common themes, symbols, and kit. The bowl is a common focus for druidic meditation and magic. It symbolizes transformation, potential, fertility, purity, health. This wooden bowl is hand-carved to show a pattern of oak leaves and acorns, which is deeply colored by years of handling. Once per day, this bowl can cast Purify Water on any water placed in it – enough for one adventurer’s daily drinking needs. 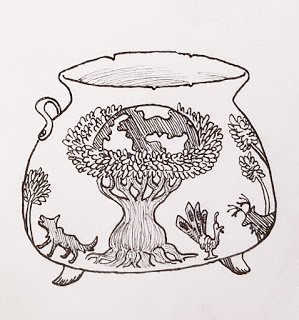 Also amongst the most important of druidic possessions, the cauldron symbolizes prosperity, hearth, safety, and often, the womb. It is said by some – for the druids are too secretive to confirm, and leave no written records – that cauldrons in some druid circles have been passed down from generation to generation for centuries. This bronze cauldron, though darkened and discolored by time, absolutely rings with history. Those within a few feet of it can hear nearly constant, indistinct whispers, usually in unintelligible ancient dialects. Once per day, if filled with pure water, a ritual allows it to cast a form of the spell Clairaudience, giving the user a few seconds of clear sound from a significant moment in the past. The sound it will reveal always originate somewhere immediately nearby the cauldron’s position; if nothing of significance is recalled by the cauldron at a given location, that day’s use of this ritual power is expended nonetheless.
Examples: in a broad field, it may reveal nothing. On the grassy gnoll an hour’s hike away, marked by a tattered banner, the last words of a general betrayed by his own men can be heard.
At a local farmhouse, the most significant event might be the joyful birth of a son during a grim time two generations before. But two houses down, it could be the sounds a of victim shouting their killer’s identity out as they were slain a decade ago.
At a profane altar beneath the ruins of a lost temple, the words of summoning that birthed a demon into the world a century before might be repeated; meanwhile, a few rooms away or a couple of floors above the altar, there might be the sounds of a pitched battle instead.
Location is very important. 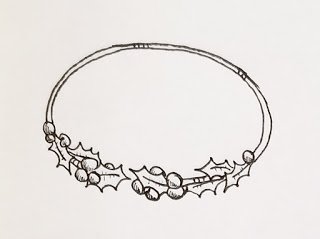 This finely decorated ornament was shaped from gold by the hands of a patient artisan. Though it conveys no magical benefits, it clearly once denoted great status amongst the druidic order. The torc is decorated with golden holly leaves and berries at the opening, with graceful curling leaves hiding their prickly tips from the skin by virtue of clever angling by the goldsmith responsible for it. To any interested buyer, it is clearly of druidic craft and will command a higher price – upwards of 1,500gp. 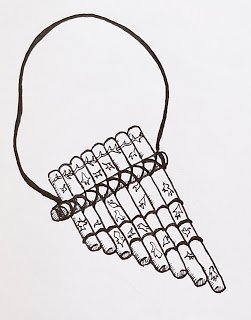 Crafted from giant canes, bound with stag sinews, this instrument is played in conjunction with stretched-hide drums at sacred rituals. It is decorated with fine carvings of small birds and bordered with an elk antler motif. The sinew cordage used as a thong round the player’s neck is stained from wear and use. The syrinx is magical, and can cast Charm Animal once per day, using the musician’s level as it’s caster level. 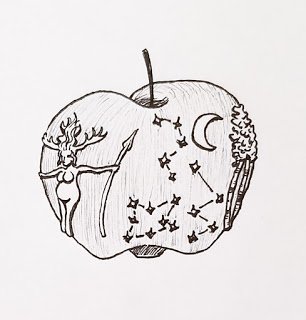 The result of countless hours in the hands of an artisan, this symbolic ivory figurine in the shape of an apple shows a series of expressions in relief carvings: one side is features a pregnant goddess of the hunt, bow and spear in hand, antlers tangled amongst wild hair; one side is a broad copse of birch trees. Between them, important constellations are engraved into the tooled surface. These symbolic star signs factor strongly into many druidic events and holy days. Though this treasure is not magical, it would be appreciated by a collector of artworks to the tune of 500gp. However, it could be worth more if returned to a druid – such as a magical boon or similar reward. 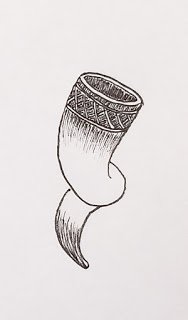 Ritualistic ingestion of many substances, from hallucinogenic fungus to blood to herbal tea to fermented berry wine, is key to many of the most sacred rituals performed by the druid circles of the world. For these, the symbolism of a drinking horn carries great weight. Though it seems like a simple implement, the care with which it is crafted, handled, and employed in their religious practices makes the horn especially valued. The horn gradually shifts from a dark chestnut color to the a pale shade like flat champagne, and is decorated simply with a basket-weave engraving near the lip. 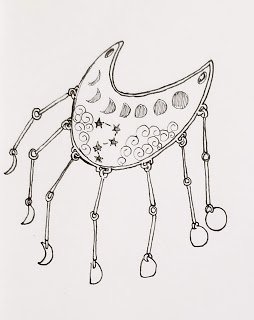 The exquisite symbol of high priesthood amongst the druids, this silver gorget is finely engraved with the phases of the moon, parting stormclouds, and the sacred sickle constellation. Silver charms in matching moon phases dangle from it, each engraved with exceedingly fine scoring. Clearly only a great druidic potentate would hold sway enough to be entrusted with such an adornment. It would be valued greatly by some collectors, since its rarity and certain import in the secretive cults of druids would make it nearly one of a kind outside the wild societies of the druidic circles. Because of the intricate artistry of the engraving, this piece could sell to such a collector, or someone convinced of its magical provenance, for much more than its material value; in such a case, the buyer could pay upwards of 2500gp.

10
Rod of the Sylvan Magistrate 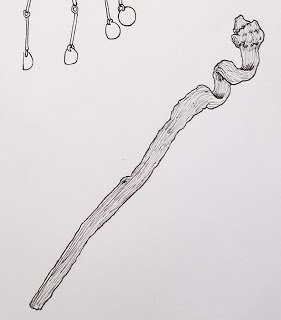 An important and ancient symbol of office and authority amongst the druid circle who once owned these treasures, this short staff of smoothed, naturally-twisted blonde ash has great heft to it and has been passed down through the generations of high druid priests and priestesses. It radiates a gentle sort of magic that seems like a cool autumn breeze to those in tune with the sensations of sorcery. Those who can sense this, through whatever means, feel an august presence to the staff, as though it carries the wisdom of sages within itself, as it has witnessed their teachings and helped to minister the laws of nature throughout its time in druidic possession. Truly an aged artifact, this staff has been of great import to a druidic community for possibly centuries, and the natural point of balance is worn glass-smooth and colored by the natural oils of dozens of hands. The significance of its provenance is apparent to nearly any student of culture, religion, or magic. When it is discovered, this staff has 1d4 charges of Barkskin, 1d4 charges of Warp Wood, and 1d4 charges of Locate Plants remaining. Once these charges are expended, the rod is rendered non-magical and is simply a four-foot-long pole.